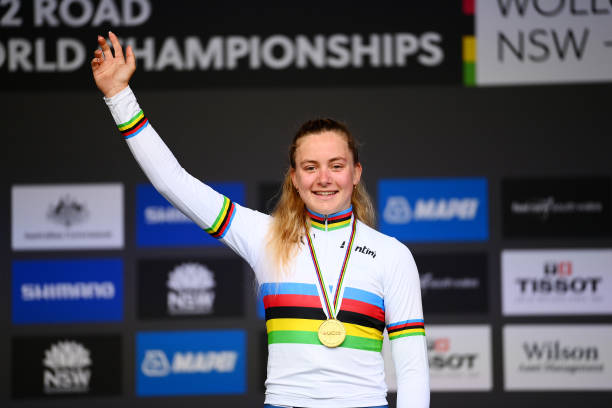 Zoe Backstedt celebrated her 18th birthday with a crushing victory to retain her World Junior Road Race title in Australia – her fourth global crown of 2022!

The Welsh wonder produced a 57km solo ride in Wollongong – coming home more than two minutes ahead of the field – to add to the time trial victory four days earlier.

In defending the road race title she won in Flanders last year, Backstedt has now won FIVE world golds in succession – and could not have picked a better day as the birthday celebrations began.

“I was in tears from a kilometre to go. There were so many people out on course just shouting out my name, shouting out Happy Birthday, especially on the climb that’s where I needed it the most,” Backstedt said.

“There were people running with me. One thing in the corner of my eye there was this little girl in a pink onesie and she just kept running alongside me the whole time screaming my name and I am so grateful for that because it just pushed me on so much.”

What news to wake up to!

Backstedt had also struck gold on the track in the Madison and in cycle-cross this year to underline her status as one of Britain’s most promising cyclists.

“Just as much as the other but it means a lot to do it. A double double and on my birthday,” she said of winning two titles in Wollongong.

Backstedt triumphed by two minutes seven seconds as Eglantine Rayer (France) got the better of Nienke Vinke (Netherlands) to take silver in the sprint finish between the duo.

And she could even joke that today’s race was similar to her stunning time trial success on the roads Down Under.

“I mean I did look at the road book but maybe I go the days mixed up.,” added Backstedt.

“I planned to go on a lap to go, something like that. I came over the climb the first time and I felt really good and I was climbing at the front, which for a climb like that and for me the rider I am, that was not predicted.”

Backstedt’s lead over the chasing pack was almost three minutes at one stage as her team-mates worked behind her before her advantage came down on the final climb of Mount Pleasant.

“It got to I think 2:55 and then I think the last lap and a half it started shrinking again,” added the Pontyclun flier.

“Then when I saw two minutes in I started to panic but my coach in the car came up behind and said, ‘you’ve got two minutes, don’t stress, take it, don’t risk it on the downhill.’

“But I did not listen to her on that part and I just dug in all the way to the line and this is the outcome.”