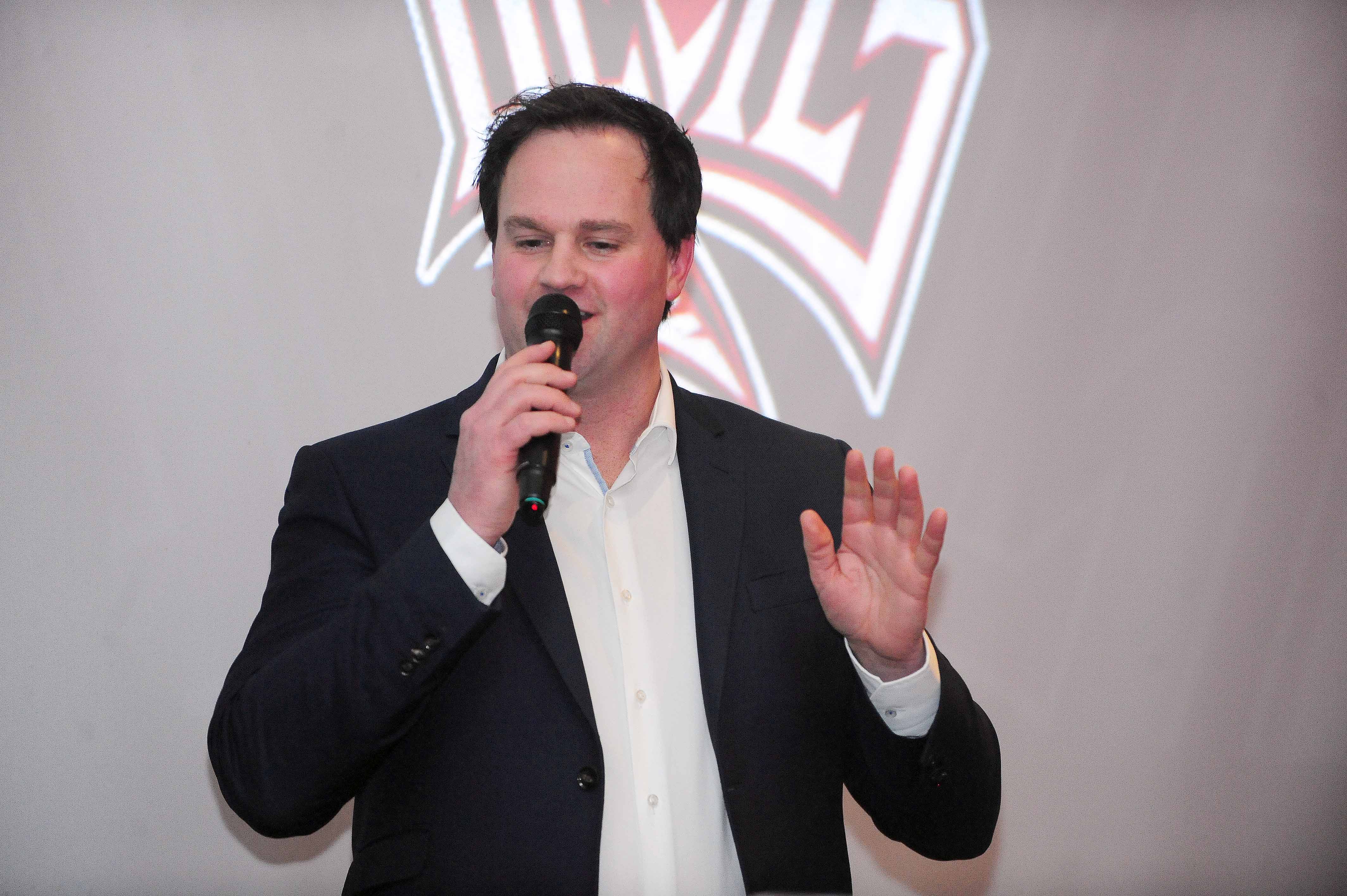 Todd Kelman, Cardiff Devils’ managing director, made an impassioned plea to ice hockey fans in Wales during the club’s awards night at the Radisson Blue Hotel.

Canadian Kelman was given a standing ovation at a sold-out event after an emotional and passionate speech, saying: “We care about this club, we love this club.

“The one thing that hurts me is when people question that, on social media, text me or e-mail questioning our passion. Don’t ever question the passion of our fan base, supporters, sponsors, staff, players, coaches. We care more than you can imagine.

“I am sick and tired hearing of people question whether we love badge or whether name on back is as important as the badge.

“We care. Believe it. Stop questioning that. Let’s all pull in the same direction over the next couple of weeks. Let’s go and win the play-offs.”

Devils have been, without question, the most consistent Elite League club during the five seasons since Calgary-based businessman and close friends invested in the club. They have won back-to-back League titles, the play-off championship, two Challenge Cups and three Erhardt Conference titles.

This is a golden era in the 33 year history of the Devils – and that is underlined by the fact that if head coach Andrew Lord’s team had earned five more points at the right times over those five years they would have won five successive League titles.

Devils missed out on a third successive League title – something no club has ever achieved – after finishing level on points with new champions Belfast Giants and missing out on a countback of regulation time wins.

Owners King, Craig Shostack, Brian Parker and Kelly Hughes have transformed Devils from a club with a highly questionable future to become the best in Britain.

I have talked to owner King, about the ‘keyboard warriors’ on social media and he admits to being ‘amazed’ at fans complaining about trivial matters, sometimes complete with attacks on the character of staff and players.

“It’s quite incredible and takes so much of the joy out of the sport,” said King. “It is a small minority of fans, but that certainly doesn’t excuse it.

“Unfortunately it means the majority of players and management cut themselves off from fan interaction which is a real shame.”

At the time I had that chat with King during January he had worked out that Devils had the highest winning percentage of any major professional hockey team in the World.

Nobody in the NHL, AHL, ECHL, KHL, Sweden, Finland, Germany, Switzerland or Austria had a better mark than Devils and King said: “An incredible accomplishment and one we should be celebrating.”

Kelman’s emotional and powerful words during the awards night hit home with fans who attended.

“Everybody at our club has played a part in the successes we have had so far,” he said. “From the start we did not talk about being owners of the club. We are caretakers – this club belongs to the fans.

“Cardiff Devils were not the first team we looked at in Britain, but what we loved was the passion in our fan base. If you have shed tears in your house, your car, on a supporters coach or in the stands, we have shed tears in the club office.

“We care. Every member of staff, sponsors, players and more have a passion for Devils.

“One factor I love about sport is that it takes over your life. Yes, that can be good and bad, but for nine months I don’t care about anything except the next game. I don’t have any influence on matches because I don’t play or coach, but I care.

“The passion of everybody involved with the Devils drives our club forward.”

Devils won 9-1 against MK Lightning in their final home fixture of the regular season last Saturday and Kelman felt for away fans who celebrated when their team scored in the final minute after going nine goals down.

Kelman was on the balcony next to club productions manager Paul Sullivan and said: “Sully said ‘what a fantastic fan base they are’.

“My reaction was ‘that sucks’.

“I never want to put Devils fans in a position where they cheer a first goal after being 9-0 down.

“Sully replied ‘We were there five years ago, that’s where we were at.’

“I looked Joey Martin in the eye after the match and he was close to crying. That’s because Joey cares so much it hurts.

“Personally, I love that about our players.

“The one thing that hurts me is when people question that, on social media, text me or e-mail questioning our passion. Don’t ever question the passion of our fan base, supporters, sponsors, staff, players, coaches. We care more than you can imagine.

“We love this club and put Devils before family and other priorities in life.

“I am sick and tired hearing of people question whether we love badge or whether name on back is as important as the badge.

“We care. Believe it. Stop questioning that. Let’s all pull in the same direction over the next couple of weeks.

“I’m asking for fans over the next couple of weeks to get behind your club. Let’s all drive in the same direction and pump our players up more than ever before.

“Tell them how great they are. Let’s go and win the play-offs.”

Defenceman of the year: Gleason Fournier.

Forward of the year: Joey Martin.

Devils in the Community: Sam Duggan.

Devils play Sheffield Steelers in the play-off quarter-finals this weekend and are intent on winning the final championship of the season.

The play-off finals weekend is in Nottingham over the weekend of April 13 and 14.

The home play-off game against Steelers will be on Sunday, April 7 (6pm) at the Viola Arena.