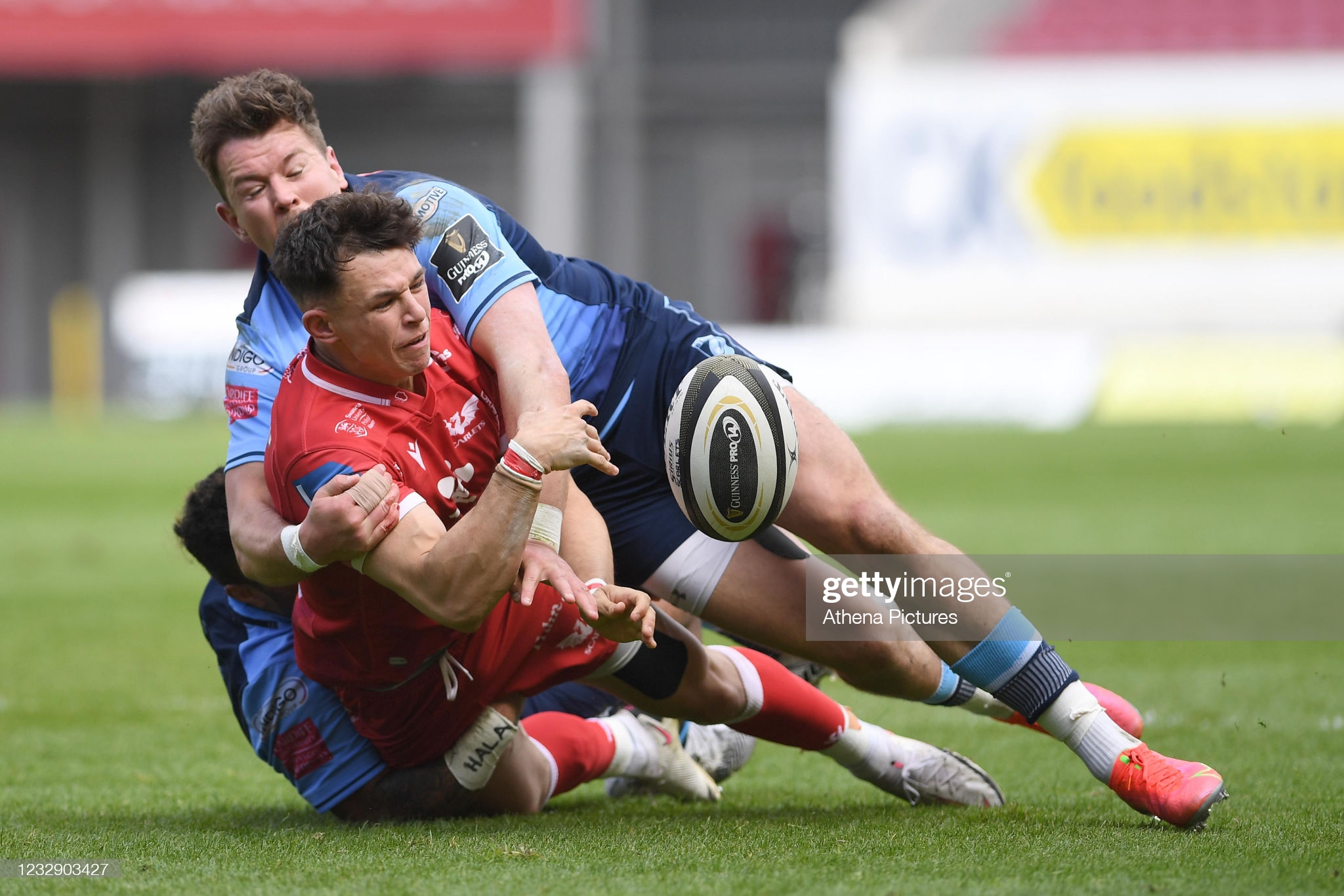 Tom Rogers in action for the Scarlets. Pic: Getty Images.

Tom Rogers declared himself “over the moon” after learning he will win his first senior Wales cap against Canada at Principality Stadium on Saturday.

Scarlets wing Rogers, 22, is one of five players who will make their Test debuts this weekend and he is joined in the starting line-up by Dragons lock Ben Carter.

Leigh Halfpenny will win his 96th Wales cap, taking the full-back to a century when including his British & Irish Lions Test appearances.

In the pack there is plenty of experience with Nicky Smith, Elliot Dee and Dillon Lewis bringing a combined 104 caps to the front-row.

Will Rowlands partners debutant Carter in an all-Dragons second-row, while Ross Moriarty, James Botham and Aaron Wainwright combine in the back-row.

Rogers’ imminent international bow will cap what has been a remarkable season for the former Wales age grade and sevens back.

Quick thinking from Kieran Hardy releases Tom Rogers for @scarlets_rugby, who turns on the afterburners 🏎

“I’m over the moon and just looking forward to getting on to the pitch now,” said Rogers.

“I didn’t expect to be here to be honest because there is a lot of competition here. It’s been very intense and I have learnt a lot in the last few days from other players.

“It’s been an honour to play and train with Leigh Halfpenny. He’s very professional in everything he does and I have learned so much off him.”

Rogers was not selected for the Wales Under-20 squad for the Junior World Cup of 2018, but he has bounced back impressively since that snub.

He has had a breakthrough campaign at the Scarlets and scored a remarkable individual try against Connacht this season.

Rogers also used lockdown wisely by building himself a gym at home.

He has reaped the rewards of that decision and has now progressed to the senior Wales side.

“I thought it was a good opportunity to kick on and use it as an advantage for me. I did not want to just sit in the house doing nothing,” said Rogers of his lockdown gym work.

“I was obviously gutted not to make that Under-20 squad, but it motivated me to prove I should have gone. It made me a better player.

“I phoned my mother and father when I made the squad. They were over the moon for me and crying.

“They’ve been with me from the start and were very emotional.

“They’ve taken me everywhere and given me everything I needed. They’ve been awesome and amazing and they’ll be the first in the stadium this weekend I can guarantee that.”

Saturday’s game with Canada will be the first at Principality Stadium to have fans since the 2020 Guinness Six Nations game with France.

There will be 8,200 supporters at the home of Welsh rugby.

“It will be amazing to have a bit of noise and it will be nice,” said Rogers.

“There is a bus full of my mates from our club Cefneithin coming up to watch on Saturday so they’ll be making a lot of noise.”

Rogers is the first Cefneithin product since the great Barry John in 1966 to win a senior Welsh cap.

“I’ll try and relax and cherish every moment on the pitch,” said Rogers.

“Playing for Wales has always been a goal of mine since I was a kid, but I never thought it would come so soon. I think I played my third or fourth professional game this season.

“It’s come quite quickly, but I am just honoured.”

“We are all looking forward to getting back to the Principality Stadium with fans in attendance and Saturday against Canada promises to be a great occasion,” said Wales head coach Wayne Pivac.

“This summer is an important block as we build towards Rugby World Cup 2023, and it is great to give five uncapped players opportunities.

“They have all impressed us in training, deserve a chance and we are looking forward to seeing them step up to the Test arena.

“At the other end of the scale you have Leigh Halfpenny, who makes his 100th Test appearance. It is a thoroughly deserved milestone for Leigh and it is made all the sweeter by the fact that his family and so many of our supporters are able to be in attendance.”