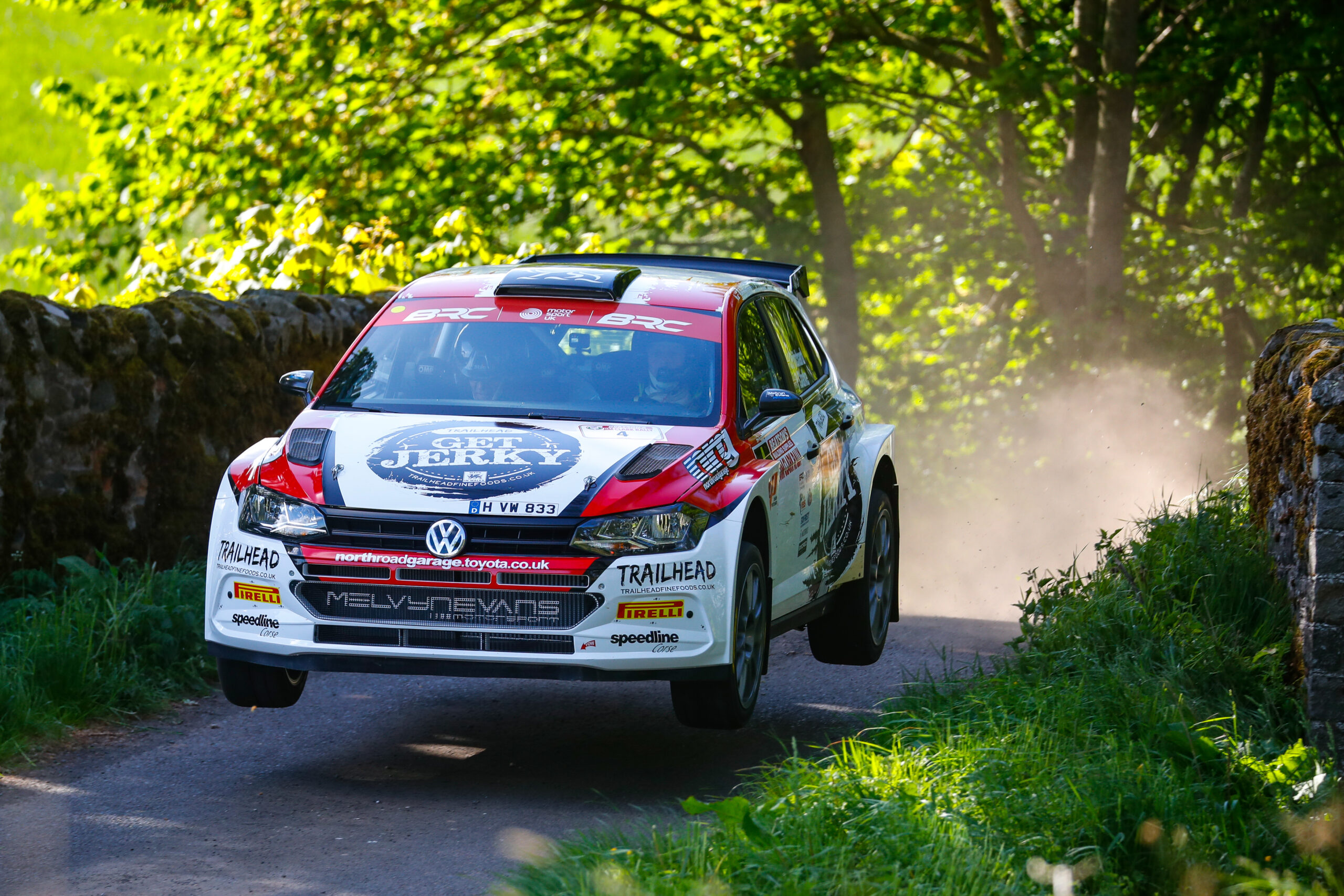 He might be more used to driving a 40-year old historic-spec Escort on gravel rallies, but that’s not going to stop Jason Pritchard going for glory when he contests his first forestry rally for 10 years in a four-wheel drive car on the Nicky Grist Stages (Saturday 9 July).

And as the local hero, the Builth Wells-based driver will have plenty of support as he tackles the loose-surface event in his powerful North Road Garage/Get Jerky/J&S Handling-backed Volkswagen Polo GTI R5.

The 34-year old driver is no stranger to forestry rallying of course, having won three consecutive British Historic Rally Championship titles in a Ford Escort RS1800 and led the Roger Albert Clark Rally on several occasions.

As the Nicky Grist Stages is the next round of the British Rally Championship, a series that Pritchard and co-driver Phil Clarke are contesting in a Melvyn Evans Motorsport-prepared Polo R5, it gives the multiple rally champions an opportunity to contest their first gravel rally in a four-wheel drive car since the 2012 Tempest Stages – and event in which Pritchard finished second on in his Focus WRC 05, despite having to complete the final two stages with a broken driveshaft.

And Pritchard will arrive at his local BRC round – which has stages in the Llyn Login, Monument, Halfway and Crychan forests – full of confidence, having recorded his first points-scoring finish of the season in the Polo R5 on the Jim Clark Rally in Scotland.

In addition to competing on the Nicky Grist Stages, Pritchard’s family-run North Road Garage Toyota dealership – which is situated in Llanelwedd, just a stone’s throw across the River Wye from where the event’s service area will be located on the Builth Wells RFC pitch – will be the venue for scrutineering on the eve of the event (Friday 8 July).

Thanks to the generosity of Pritchard and his father Eian, the dealership will provide the event with superb modern workshop facilities for the scrutineers to conduct their technical checks before the 45-stage mile event gets underway the next day.

Looking forward to my home round of the @BRCrally and getting back in a 4 wheel drive on gravel. @ToyotaNRG @Trailheadjerky https://t.co/l1dDps4c4S

“I’m looking forward to contesting my first forestry rally in a four-wheel drive car for ten years, and it’s extra special to be doing it on my home round of the British Rally Championship and having all my friends and family out supporting me on the Nicky Grist Stages,” said Pritchard.

“I’m used to driving on gravel rallies in a forty-year old historic Mark 2 Escort, so I hope to be able to test the Volkswagen Polo R5 on gravel before the event gets underway.

“There is a huge difference between an Escort Mk2 and a Polo R5, in particular the suspension and braking capabilities. With the Escort you need to use the transmission to help the car slow down, and with the Polo you can just hit the brake pedal and the car stops – so I’ve been told! Getting the braking points right is the one thing that’s going to take adjusting to the most. Melvyn’s team won the BRC Teams’ title last year, so I’m sure they’ll have a good base setting to start the rally and it’s just about fine tuning it to suit me.

“It’s nice to arrive at my home round of the British Rally Championship off the back of my first finish in the Polo. I’ve never been so relieved to get to the finish of a rally as I was on the Jim Clark, as it’s been a difficult few months with the lack of lady luck to even finish a rally. It’s all about seat time and getting fully tuned into the Volkswagen. The more I drive the car the more comfortable and confident I am and getting those competitive miles under my belt on the Jim Clark was a big confidence boost.

“Whilst the Nicky Grist Stages is my local event, I don’t exactly drive back and fore to work through the forests every day, so I don’t actually know them that well. In fact, the last time I saw them was on last year’s Nicky Grist Stages. But I’m looking forward to rallying there in front of my family and friends.

“I’d also like to give a big shout out to my sponsors – namely North Road Garage, Get Jerky, J&S Handling, Trailhead Fine Foods, Chartists 1770, Pirelli and Speedline Corse – without whom contesting this year’s British Rally Championship simply wouldn’t be possible.”

The event has partnered with Carbon Positive Motorsport to provide carbon offsetting for all competitors and organisers’ event vehicles, as part of a long-term roadmap and commitment to mitigate the event’s carbon footprint. A special discount code (NG22S) has been created to use on Carbon Positive Motorsport’s online sales platform, which is available for all competitors and spectators to use to carbon offset their event-related travel.