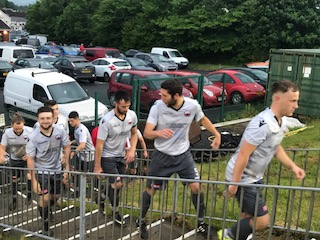 Trefelin BGC FC players on their way out for the League Cup final second half last season. They won 2-1 against Llanelli to lift the trophy at Garden Village FC.

It was a heartening trophy win for Trefelin, who missed out on promotion when they finished third behind Swansea University and Bridgend Street.

Anthony Finselbach was the Llanelli man dismissed for a second bookable offence and he was the target for some appalling language as he walked between fans on his way back to the changing rooms.

Stewards nearby did little to help Finselbach, who resorted to a few choice words of his own.

The boys from Port Talbot were underdogs going into a match watched by 300-plus spectators, but they snatched victory because they refused to back off against favourites Llanelli.

Matthew Beynon and Andrew Davies at the heart of defence won virtually every aerial duel against Llanelli’s big men, while their team-mates fought with a ferocity which denied the Reds time and space.

Ryan and Llanelli manager Andy Hill are close pals – they worked together at Goytre United – and it was the Trefelin man who came out on top this time.

Trefelin had the first big chance of the match when they were awarded a penalty after 38 minutes. A long cross was lifted into the penalty area and Jordan Edwards jumped as goalkeeper Craig Morris charged out aiming to punch away.

The run by Morris was ill-timed, wiped Edwards out as he challenged and referee Gavin Townsend pointed to the spot. Edwards jumped up to take the spot-kick and Morris saved to keep the score at 0-0.

Jamie Latham opened the scoring soon after half-time when Trefelin opened up Llanelli with a flowing passing move and the finish was a simple tap in from 10 yards.

Edwards added a second two minutes later when the Reds only half cleared from a free-kick and the Trefelin man turned and twisted acrobatically to fire an overhead kick into the corner.

When Finselbach was booked during the first half when he impeded a Trefelin player his manager, Hill, pointed to his head and shouted: “Now you have to think and stay calm.”

The Llanelli man, with ‘Finsy’ on the back of his shirt, may have listened at the time, but he saw red after a spell of moaning at the referee followed by a bad challenge.

At 2-0 ahead and playing against 10 men Trefelin looked in charge, but Llanelli kept battling and threw everything they had at their Third Division opponents.

Llanelli were awarded a penalty when Trundle was fouled and goalkeeper Matthew Stanton saved from striker Joe Clarke.

Moments later Trundle was down again and it looked an even more blatant penalty after a tackle from behind which left the former Swansea man injured and unable to play on.

This time referee Townsend turned away appeals and awarded Llanelli a corner. That came to nothing, but the Reds did pull a goal back when substitute Ross Jones headed firmly into the corner after 90 minutes.

There was a brief scuffle, involving players from both teams, as Llanelli tried to grab the ball and take it back to the centre spot, while Trefelin wanted to slow things down.

Townsend added five minutes injury time, but there were no more goals and Llanelli’s bid for a #DoubleDouble was over.

They won the Division Two title plus the League Cup a year ago and were crowned First Division champions this season, earning promotion to the top flight.

But it was Trefelin’s night in the final and, boy, did they deserve their victory.