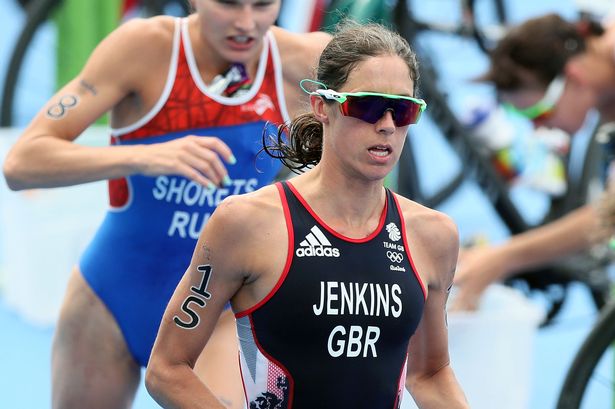 Helen Jenkins wants to regain her spot in the GB triathlon team.

Wales’ two-time world champion Helen Jenkins is also now a mum-of-two with husband Marc. She has also undergone serious spinal surgery but, as she tells Dai Sport’s Ian Gordon, the Bridgend star is aiming to do a Tiger Woods in triathlon by making a comeback that could lead to a battle of the Supermums at the Tokyo Olympics in 2020.

Coming back from serious spinal surgery and attempting to regain your place among the elite of world sport is a difficult enough prospect.

Doing so having just become a mum for the second time, and combining training with the demands of looking after two children aged under two, makes it even more daunting.

Yet, that is exactly what Helen Jenkins, Wales’ most successful triathlete, is attempting to do as she looks to win back her spot in the British team for next year’s Olympic Games in Tokyo.

In May, the two-time World Champion gave birth to son, Max, a brother to 21-month-old daughter, Mali, with husband, coach and fellow international triathlete Marc.

The Bridgend-based couple opted to add to their family after Jenkins underwent similar spinal fusion surgery to golfer to Tiger Woods, before he returned to win his 15th major at the Masters in Augusta in April.

“I came back after having my first child, then needed surgery which has taken longer to recover from than we thought,” says Jenkins, who won the ITU world title in 2008 and again three years later.

“We thought it was the ideal time to have another baby if we were going to.

“My back felt really good throughout the whole pregnancy so it is quite exciting if I do manage to get back to a full level of training and I won’t have to manage things as much as I have had to in the past.

“I really want to combine training and parenthood. With my daughter I went out training quite quickly after giving birth to her.

“While I don’t feel I missed out as I spent a lot of time with Mali, it is hard to go out the door. You do feel guilty and you think you’d rather be in the house,

“That’s why in my head I’ve given myself a six month window this year. I am going to be a mum first, then we will see how my fitness is and how I’m coping with it all.

“The first few weeks have been interesting with having another child to cope with. It is going to get easier as they get older, but we’re incredibly lucky as both sets of parents live close and are incredibly supportive.

“If I am going to get back out there training, then I will need that network of support.”

Jenkins has been one of Britain’s top triathletes for many years. As reigning world champion she was one of the favourites for London 2012, but injury in the build-up cost her on the final leg, the run, as she finished fifth.

Now, she hopes her two children will get the opportunity to see her battling for major medals again.

“It is a big motivation for my children to see me compete as they haven’t done. I did all that before having them,” she adds.

“There isn’t much stuff from my career around the house. But we were watching one of the world series races the other day and Mali quite got into it. I did say ‘Mum used to do this’ but I don’t think she got it. She is still very young.”

And even in her own sport there is a perfect example in what could be a battle of the Supermums in Japan next year, with Nicola Spirig of Switzerland.

“Nicola won the Olympics in London then went on to have a baby, then got silver in Rio,” adds Jenkins. “So you know it can be done.

“Nicola is a friend so we keep in touch and I’ve chatted with her about how she managed it all and she is going for Tokyo having had her third child.

“It is not an unknown being a mum and an elite athlete. There are so many good role models for women coming back after childbirth.”

The 35-year-old has always had issues with her back, but is hopeful the surgery is successful.

Jenkins has targeted the Cardiff Half Marathon in October for her return, not so much for serious competition rather than seeing how her body is coping after the surgery. And it gives her a rare chance to take part in a big city event.

Then it will be targeting a place in Tokyo where the competition will be tough with GB triathlon, on both the men’s and women’s sides, very strong. There is also the 2022 Commonwealth Games in Birmingham.

“I haven’t competed since 2016 and it has been difficult. I love watching the races when they are on, but I do miss it.

“The issue with the back is a genetic thing which I’ve managed to cope with throughout most of my career.

“The problem I was having was with swimming. Normally, when you have an injury swimming is the easiest thing to be doing but you do extend a lot through your back when you swim which I can’t do now as I’ve got screws and plates in my back to keep everything where it is meant to be.

“They are going to stay in there now unless they need to come out. The bones fuse around them. It feels good.

“I didn’t really realise before how much pain I was in. I could only get out of bed a certain way and if I had to sit in the car for a certain period of time everything was aching. But now I don’t have any of that.

“It’s good to do certain things and think ‘oh, that doesn’t hurt’. For the future a lot of it will depend on if I get back to a good enough swimming level, which I think I can.”

Overseeing her training will be coach Marc, who also competed for Britain at the 2004 Olympic Games, as well as doing his bit on the parental front.

Marc says: “The older Max gets the more focus will be on me looking after him and Helen can just train and concentrate on what she does and not have to worry about looking after the kids at night.

“It can go either one of two ways, now. She will either not be able to compete to a high standard again or she will be better than she has ever been.

“If the limiting factor throughout her career has been her back, which we know it has, then we are hopeful that this surgery might have fixed it. We will see. We will give it a shot.

“The Tiger factor is there. He had a lot of back surgeries and though I don’t know exactly what he had, it was very similar.

“He may not put the load directly through the spine that Helen might with the running, but he is certainly pulling way more rotational force that Helen will be.

“And his back has held up bloody well, hasn’t it?”