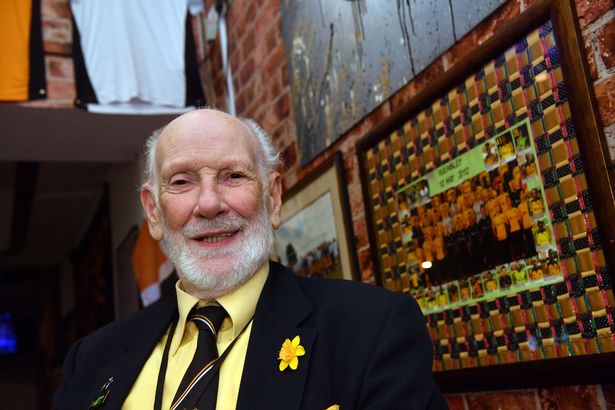 Tributes have been paid to David Hando, Newport County’s club president and one-time saviour of the club, who has died at the age of 84.

Hando played a vital role in keeping the club going after it was liquidated in February 1989.

As chairman of the Exiles for the first nine years of its existence, Hando was instrumental in the club’s success and was inducted into the club’s hall of fame in 2015, two years after the team’s return to the Football League.

In 2012, Hando told the South Wales Argus about his role in the reformation of the club, saying, “A group of fans, including myself, got together and decided we needed to set up a new club.

“But our status meant no-one would recognise us. The council said we were the old Newport County in disguise who owed people money and so wouldn’t give us anywhere to play, while the FAW said the opposite, saying we were a new club and therefore we had to start by playing in the parks leagues.

“We ended up in Moreton-in-Marsh and then at Gloucester City, it was a long way back for the club.

Everyone involved with Newport County AFC is saddened to learn of the death of club president David Hando BEM following a period of illness at the age of 84.

“Every game was effectively an away game, and even though we had 400-plus supporters follow us up to Moreton in the beginning we needed to come back to Newport.

“We’ve fought a lot of battles to get back here, but I think all the hard work from a lot of people, particularly someone like [former chairman] Chris Blight, has paid off.”

In addition to his work with the football club, Hando was also a deputy head teacher, served as a councillor in the city and founded the Friends of the Newport Transporter Bridge, later becoming chairman.

“David Hando was a champion for the city he loved,” she said.

‘He won for Newport’ – tributes pour in after death of former County chairman https://t.co/fVSBlcIwvw

“As a ward councillor, a tireless advocate for our Transporter Bridge and an iconic stalwart of Newport County, which he helped rise from the ashes.

“He will be much missed in Newport and beyond.”

Newport East MS John Griffiths said: “Thinking of David and his family at this difficult time.

“He was the very best of our city.”

He is survived by his wife Mary and three children, Steve, Laurence, and Julian.