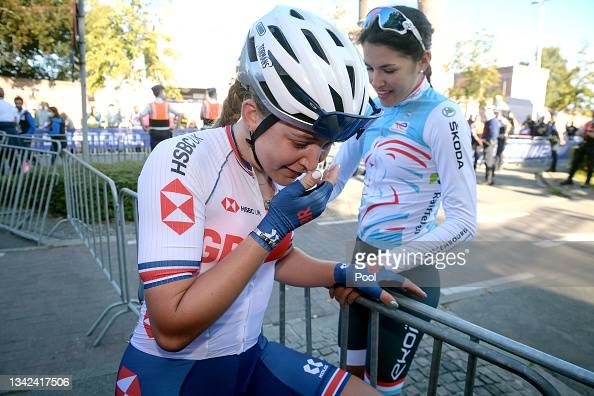 New Welsh world champion Zoe Bäckstedt revealed she had her whole family in tears after winning the junior road race title at the UCI Road Cycling World Championships in Belgium.

The teenager from Pontyclun in mid-Glamorgan cried on the podium, while her parents and sister wept tears of joy after watching her weekend triumph.

Bäckstedt, 17, is the daughter of Magnus Backstedt, a former Tour de France stage winner who made his home in Wales after marrying former British champion Megan. Magnus was commentating on the race for Eurosport.

Bäckstedt – whose elder sister Elynor, 19, previously won bronze in the same junior world title race – said: “I have no words at all I can’t believe I’ve just done that, it was probably the hardest race I’ve ever done.”

“I was just trying to keep us moving, keep us away from the group behind. I knew I had teammates in that group, my three teammates, I knew they would be trying to help me get that gap out a little bit more and once it was above 30 seconds, I knew I could hold it with the American.

“We kept communicating, saying let’s get ourselves to the line and we’ll just sprint it out and see what happens in the last lap. We did that and it came down to a sprint and I just had it.”

Bäckstedt overcame her American rival, Kaia Schmid, sprinting side by side for the final few hundred metres, but it would be Great Britain that prevailed as the winner on the line.

Once off the podium Backstedt and her teammates embraced in a hug to celebrate a team win, all riders finishing in the top sixteen, and the new world champion.

After the race, Bäckstedt said she thought she had got a slow puncture during the race, but still managed the impressive win.

“I think I had a slow puncture for the whole race,” Bäckstedt added.

“I could feel at one point that it was a little bit flat, but from cyclocross I know I can ride a tyre that’s got a bit less air in, I just have to be a bit more careful on the corners.

“I knew if I could get into the last corner first, I could take it at my speed and she wouldn’t be able to get away from me, so I took it first and took it up to a sprint and it worked out perfectly.”

After only turning 17 on Friday, a gold medal and rainbow jersey were the perfect birthday gifts to take home.

In the elite women’s race, Lizzie Deignan would finish 14th as the top British rider in the same group as the winner, Elisa Balsamo (Italy) as the race came down to a bunch finish.

There were emotional scenes for the Bäckstedt family in Leuven and back home in the UK, as Zoe won the rainbow jersey in the women’s junior road race while dad Magnus watched nervously from the Eurosport commentary booth.

Wondering how on earth @Maggy_PR held it together when his daughter, Zoe, was battling it out for a rainbow jersey?

Answer, he didn’t, but you have to love this reaction. Congratulations Zoe Backstedt, Junior Women’s World Champion pic.twitter.com/tUhioUo1S3

“I’ve never cried so much after a race. I crossed the line and I realised I was world champion. It just means so much to me that I can wear this jersey next year,” Zoe said.

“I saw my sister and my mum but I haven’t seen my dad because he was back home commentating on the race for Eurosport.

“Apparently he was crying when I crossed the line. My sister and mum were both crying at the finish as well, they were so happy for me and I’m so glad I could see them beyond the line.”

Bäckstedt had broken away with Kaia Schmid, the Brit unable to rid herself of the American and having to win the two-up sprint to claim the rainbow bands.

“We worked so well together, once we got away as a two, we just kept pushing.

“I tried to just get a gap and see what happened because I knew I was strong enough to be able to ride the last bit solo, as I’m quite good at time trialling,” Bäckstedt explained.

“But I wasn’t able to get rid of her, I was a bit annoyed because I wanted to go it alone but it’s not bad to have someone else with you.”