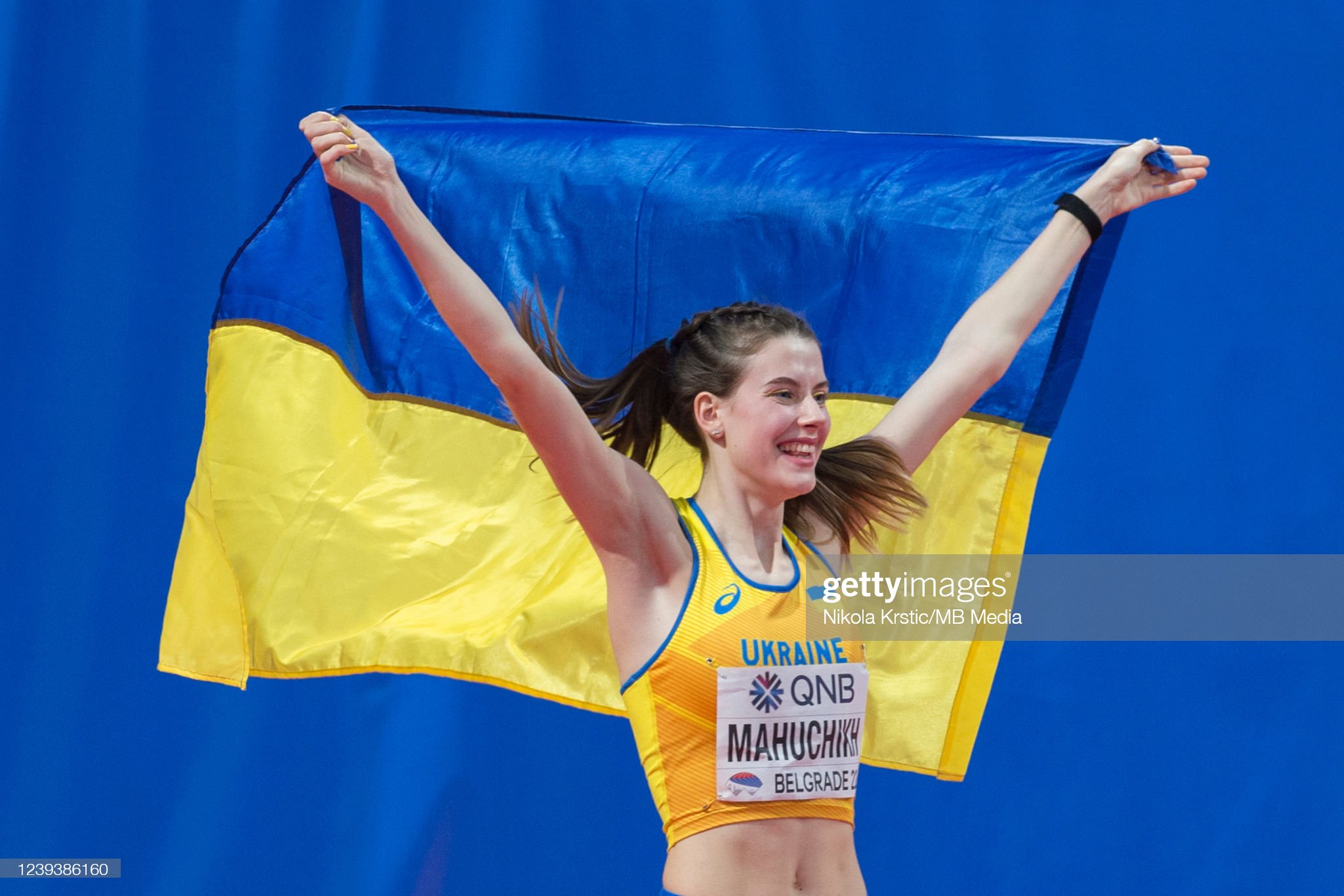 “I jumped for a medal for our Ukraine. I protect our country on the track and show that Ukrainian people never give up – and it is a strong nation which will do everything to win.”

These are the powerful words of Yaroslava Mahuchikh after she claimed gold in the high jump at the World Indoor Athletics Championships in Belgrade.

The 20-year-old was in third place before she produced a fantastic 2.02m clearance at her first attempt at the height to beat Australia’s Eleanor Patterson (silver) and Kazakhstan’s Nadezhda Dubovitskaya (bronze).

Miss Mahuchikh’s performance was more impressive considering that the Olympic bronze medallist had driven from her war-torn homeland for three days to compete in Belgrade.

Mental strength is often a phrase used too glibly in modern-day sport. Still, it is safe to say that the term is undoubtedly worthy of use when writing about Yaroslava Mahuchikh’s achievements in the face of adversity.

Yaroslava #Mahuchikh’s success at #WorldIndoorChamps brought brief but much-needed elation and escapism to #Ukraine️🇺🇦
For her open communication since then, and for being a beacon of light in darkness of #UkraineWar, Yaroslava Mahuchikh is JTA Communicator of the Week. pic.twitter.com/pHkWsjTerP

Mahuchikh’s achievement mirrored that of her fellow compatriot Vitali Lukianenko when he struck gold in the men’s vision-impaired sprint at the Winter Paralympics earlier this year in Beijing. Lukianenko shared the podium with fellow Ukrainians Oleksandr Kazik (silver) and Dmytro Suiarko (bronze).

Inspiring stuff at a time when sporting endeavours doubtlessly help lift the spirits of a country that is fighting for its very existence.

This courage and unyielding determination to make your country and its people proud amidst warring conflict has led many to believe Ukraine should automatically qualify for the Football World Cup in Qatar in November – at the expense of Scotland and Wales.

Daily Telegraph columnist Jim White was the first to lead the chorus for the Celtic nations to forget playing their play-off qualifying deciders against Ukraine in June and step aside for the Герої (The Heroes) to take their place in Qatar.

Englishman White said that Wales and Scotland faced a ‘moral conundrum’ when both countries faced the prospect of playing Ukraine. Scotland plays Ukraine in the FIFA World Cup Play-Off Semi-Final at Hampden Park on Wednesday, 1 June, with the winners scheduled to play Wales in the Play-Off final in Cardiff on Sunday, 5 June.

“Both Wales and Scotland are used to being the underdogs, the neutral’s favourite, the side everyone else wants to win, especially when they are playing England. Not this time. This time they are loaded with different symbolism, “ insisted White.

Columnist White isn’t alone in thinking that Ukraine should be given a place at football’s top table in Qatar. Dynamo Kyiv manager Mircea Lucescu also backed the notion of Ukraine getting a free passage into the tournament when he said:  “It’s the right thing to do and would immeasurably help Ukraine both in a sporting sense and also for the morale of the people.”

Even Boris Johnson also seemed keen on the idea from a goodwill perspective.“Sounds like a good idea to me. Let me put it this way, given what Ukraine has been going through, given the privations that Ukrainian footballers have had to endure, I’m sure that every possible sympathy and allowance should be made for them,” said the Prime Minister.

In an ideal world where morality and fairness lead the way, it is easy to agree with White’s passionate sentiments. But unfortunately, we don’t live in a perfect world. Sadly the war on Ukraine by Russia boldly highlights this. It could be argued that Boris Johnson’s comments display a willingness to say whatever shows him in a good light.

Indeed, White is right when he suggests seeing Oleksandr Petrakov’s side compete in the upcoming tournament would boost the  ‘morale in the beleaguered nation.’

The men's national football team of Ukraine presented a special uniform in which they will play in the upcoming friendly matches.
📸 Andrii Pavelko pic.twitter.com/HcvX3RlOLi

However, I feel he has got it wrong when he states: “For Wales and Scotland to stand aside would be one of the most impressive actions in the history of sport.”

If Wales and Scotland were to forgo their right to play these qualifying matches and allow Ukraine a free passage to the World Cup finals, many would view it as little more than a symbolic patronising tap on the head.

That is not the way to treat a proud nation in sporting terms or in any other circumstances.

Ukraine manager Oleksandr Petrakov has already stated that he wants his team to make the finals in Qatar on merit and merit alone.

He said: “Do I think we should have a World Cup place donated to us? Of course not. We must play in Scotland, then Wales and get a World Cup ticket on our own.”

Ukraine midfielder Taras Stepanenko is also determined to give his all for his country to bring pride to his nation.

Andriy Shevchenko could not hold back tears, speaking about the war in #Ukraine.

The former head coach of the #Ukrainian national football team spoke about his feelings about the war on Italian television.#StandWithUkraine️ #ArmUkraineNow #UkraineWillWin pic.twitter.com/EDwx6BMR88

“Every day, we receive messages from our soldiers. Many soldiers and many people in Ukraine love football, and they have only one demand: ‘Please do everything you can to go to the World Cup’,” Stepanenko told a news conference.

Powerful words from a player whose team will lack little motivation when facing Scotland at Hampden Park in a few weeks.

To suggest that Ukraine should be given a bye is to imply that they are not capable of winning these qualifying fixtures against firstly Scotland and then Wales.

Wales goal scoring legend Ian Rush has already said he prefers to play Scotland in the play-off final other than face an emotionally charged Ukraine in Cardiff.

“We’ve got one more game to go either against Scotland or Ukraine – and I know who I’d rather play,” said Rush.

Scenes of support for Ukraine at the football matches tonight – Wales v Austria and Scotland v Poland. Tonight was the evening the Ukrainian national team was scheduled to play Scotland in Glasgow in a World Cup play-off match. The match has been rescheduled for June. pic.twitter.com/XA4YzysvSo

“If we play Ukraine, the whole of Europe will be willing them to win, and I can understand that. However, I wouldn’t want Wales to have to come up against that tidal wave of support, so I’d rather play Scotland, “ he added.

To go back to White’s comments: “Imagine if Ukraine made it to the tournament in November, what that could mean for the morale in the beleaguered nation. Imagine Andriy Yarmolenko and Oleksandr Zinchenko lining up to sing the Ukrainian national anthem ahead of their first group stage game against Brazil.”

“What a magnificent riposte it would be to the murderous dictator in the Kremlin,” added White.

Not even the most one-eyed Wales or Scotland fan would be against such an emotional scenario being played out come November. Still, indeed the idea of professional sport is that it is always a contest?

You are setting unwanted precedence if you handed Oleksandr Petrakov’s men a free passage to the tournament. The precedence would continue to be constantly challenged at every major sporting event – with Ukraine being held up as some unwanted example of pity.

The Ukrainian people deserve to be given more respect than that – a lot more.