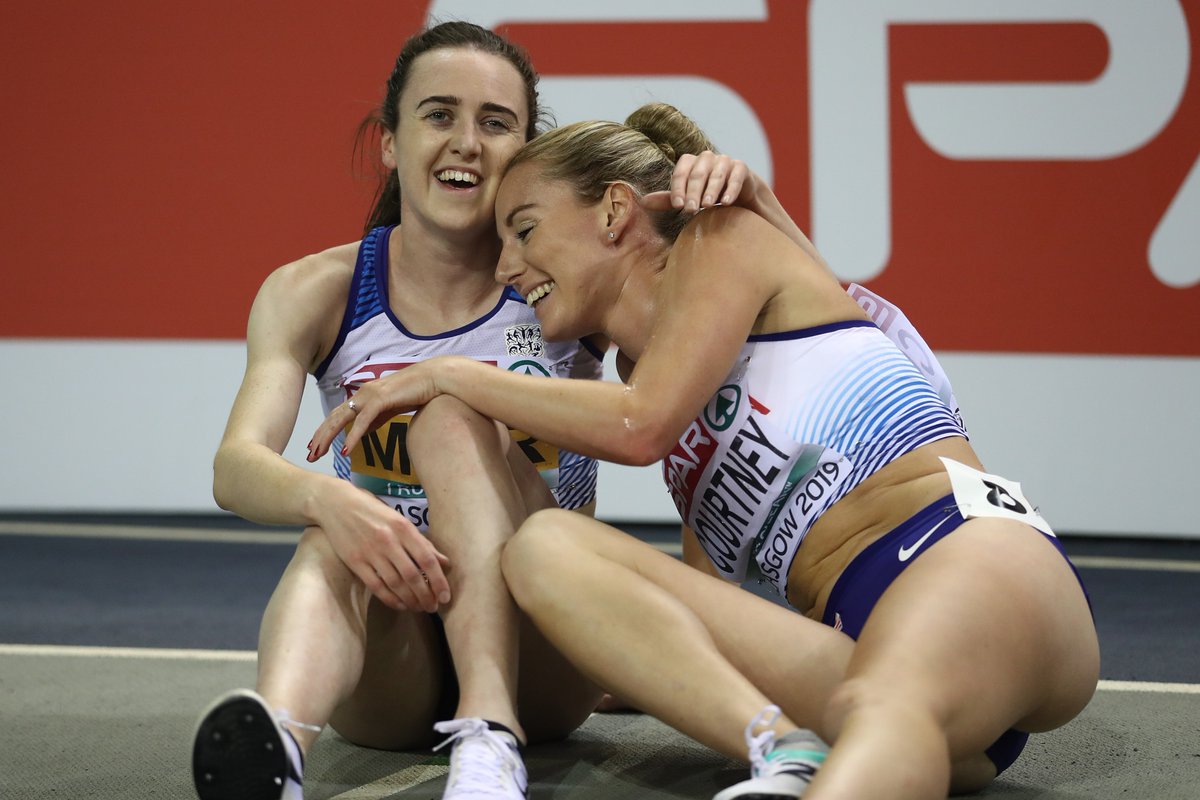 Laura Muir and Melissa Courtney celebrate after their gold and bronze in 3000m at the European Indoor Championships in Glasgow in March.

The Poole AC athlete also ran a huge personal best, smashing her own Welsh 3,000m indoor record in the process as she finished third behind home favourite Laura Muir and Germany’s Konstanze Klosterhalfen.

Courtney is now the fourth fastest Briton over 3,000m, moving ahead of Zola Budd on the all-time list.

The 25-year-old’s time of 8:38.22 was almost five seconds faster than the Welsh record and PB she set in Germany earlier this year.

With Muir and Klosterhalfen having opened up a clear gap at the head of the field going into the second half of the race, Courtney produced a hugely courageous run to hold off another German in the shape of Alina Reh and clinch bronze.

Despite claiming bronze behind the two red hot pre-race favourites, Courtney wasn’t entirely happy with her tactics during the race.

The Commonwealth Games 1500m bronze medallist said: “You know I kept getting myself in the wrong position all the time and all I could think was ‘my coach is watching this thinking what am I doing, why are you going backwards, forwards, why are you in lane two, lane three’?

“But I just had to really try and focus and I missed the kick when Klosterhalfen went. And I thought ‘I need to react to this’.

“I still class myself as a 1500m runner and doing 5k now as well, but I think 3k is the perfect one in the middle. But my coach says I need to be good at 1500, 3k and, to help, the 5k, as they all complement each other. I’m looking forward to competing across all in future.

“It did hurt, it was more like the last k was grinding, but we’ve been doing some tough sessions and I was going over them in my head on the last lap thinking I can do this!”

There was disappointment earlier in the evening for the other Welsh athlete in action on the first day of the championships.

Owen Smith missed out on a place in the 400m final after he finished fifth in his semi-final, clocking 47.39 – just over a second slower than the personal best he set at the British Indoor Championships three weeks ago.

Earlier in the day the Cardiff athlete qualified impressively for the semi-final in his first individual appearance in a senior GB vest.

Smith ran from the front for most of his heat before just being caught on the line to finish second in a time of 47.50 and qualifying automatically for the semi-finals.

Smith clocked 47.50 to see him progress to the next stages.

“I thought I set out really well – I came through at the break and controlled it like I wanted to,” reflected Smith. “I looked at the screen on the back straight and thought ‘OK I’ve got a bit of a gap’ and I thought I’d done enough not to be caught.

“Finishing second takes the stress out of having to wait for those next few heats to go and makes my life a bit easier for the lane draw later on.

“I think I made it up all over the first 200, it’s always hard to close a gap on someone once they’ve opened it in my personal experience.

“I like getting out hard and controlling the race, you’ve got to work that harder to get back on par and then work a bit harder again to go past.”

Big effort from @OwenSmith400 today but just missed out on @EuroAthletics 400m final! Huge steps forward made this indoor season tho & can now get ready for some 4×4 relay fun on Sunday!!

Smith wasn’t available to comment after the semi-final as he went off for medical treatment. Hopefully he will be fit to take his place in the 4x400m relay alongside fellow Welshman Joe Brier on Sunday.

However, there was better news for Smith and Brier’s Cardiff-based training partner Joe Reid, who qualified for the final of 800m on Friday evening.

Reid, who is coached by former Wales and Great Britain one-lap sprinter Matt Elias, finished fourth in his heat in a time of 1:48.56, which was enough to see him into the final.

The Isle of Man international said after his race: “Obviously I didn’t want to qualify as a fastest loser but in the circumstances you just take it anyway you can get it. I’m the last person in the semi but I’m happy.”

The Cardiff Met student added: “Even though my race was only half an hour ago I feel like I’ve learnt a lot from it already.

“Racing against the big boys – it’s my first senior international like this so I’ve been taught a lot of lessons out there I can take into the semi finals tomorrow and perhaps I won’t be as tentative and naïve.

“Maybe if I think I should do something I should just do it, don’t let myself be bossed about by these boys just because they’ve been here before and done it.