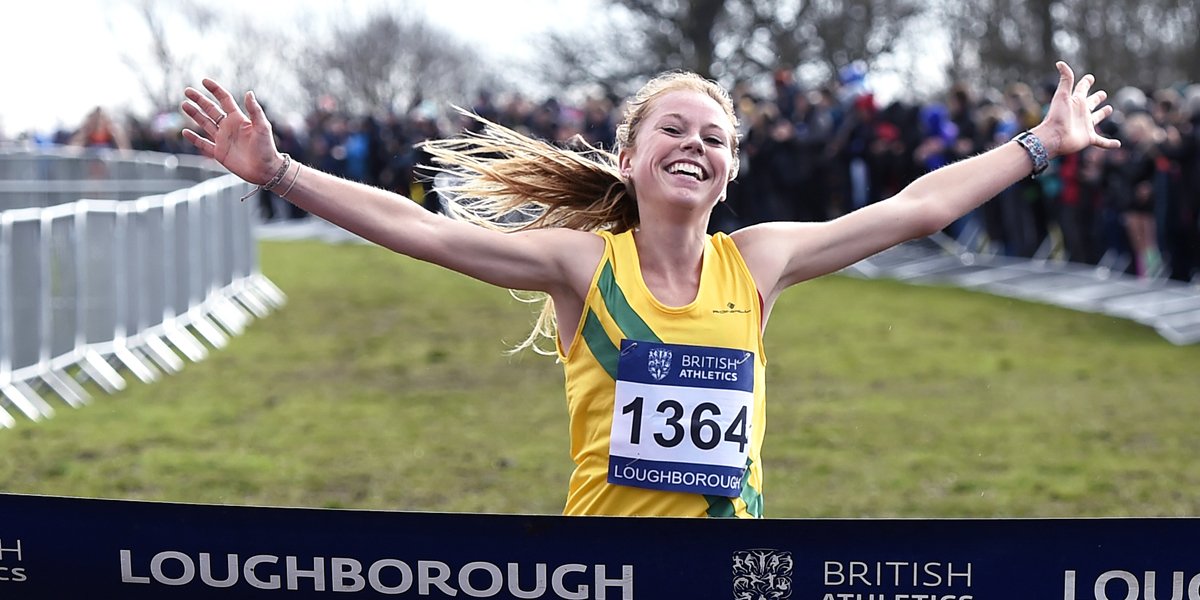 Jenny Nesbitt celebrates after her victory in Loughborough.

Jenny Nesbitt is aiming to graduate from her student athletics career with a medal at next month’s World University Cross Country Championships in Morocco.

Now 25-years-old, this is the Cardiff Metropolitan University student’s last chance to represent Great Britain at university level, having competed for her country on three other occasions.

On her previous appearance at the World University Cross Country Championships, Nesbitt finished just outside the medals after leading for most of the race.

The reigning Welsh cross country champion hopes she can make amends and sign off in style on March 7 in Marrakech.

Nesbitt told Dai Sport: “I’m delighted because this is the last chance to get selected for a world university team because of my age, so to be able to go and represent Great Britain and Cardiff Met for one last time will be really good.

“The last time I went out to the world university cross country championships, I finished in fourth place after leading for 95 per cent of it, so I really want to try and rectify that this year.

“I feel like if I can get there in good shape, you stand on the start line and anyone can get a medal, you’ve just got to get it all right on the day. I’ve had practice at these events before so I know what to expect. I’ll go there and give it the best shot I can.”

The course in Marrakech is unlikely to be anything like Nesbitt experienced in Edinburgh last weekend where she secured her place on the Great Britain team by finishing third at the British Universities Cross Country Championships.

However, selection for GB means Nesbitt will miss out on going for a second successive win at the British Athletics Cross Challenge event in Loughborough, which falls on the same day.

“I’m really gutted not to go up to Loughborough and try to retain my title there,” says Nesbitt.

“Last year was such a surprise to cross the line first and get on the team for the World Cross Country Championships. It’s a shame not to be there, but running for Great Britain was an opportunity I couldn’t really turn down.”

Commenting on the contrast between competing in North Africa and the Midlands, Nesbitt says: “First of all, I think it’s 27 degrees currently in Morocco and sunny!

“I don’t think there will be a spot of mud on the ground. So they will be very different conditions to what Loughborough will be like and how Edinburgh was last weekend.

“I’ve seen a course map and I’ve asked a few people about it, I think it’s on a dusty, race track – that’s the impression

“I’ve had and I know they’ve added a couple of classic mounds and things just to spice it up a bit. I’ll be interested to see what it’s like once I get out there.

“I’ve experienced quite a lot of cross country races abroad and each one takes you by surprise. You’re not really sure what to expect until you get there. In the UK it’s almost quite predictable what the conditions and the course are going to be like.

“But in Europe and around the world, cross country is different everywhere you go, which makes it fun and challenging. You leave no stone unturned when preparing for events like that.”

It’s a busy start to the year for Nesbitt, who recently returned from a warm weather training trip to Spain with the Welsh Athletics endurance squad.

Before jetting off to Morocco, she plans to compete in the Armagh 3K race in Northern Ireland next week before running over the same distance at the British Indoor Championships in Glasgow on February 23.

Unfortunately that means she won’t be able to defend her Welsh Cross Country Crown at Pembrey Country Park the day before.

“I’m going to drop down and do a bit of speed work rather than go back and try to retain my Welsh Championships title.

“I’m gutted to be missing it but excited to be trying something new,” said Nesbitt, who is combining doing a masters in sports broadcasting at Cardiff Met with her busy running schedule.

Nesbitt is grateful for the support and understanding she receives from the staff, particularly Joe Towns, the senior lecturer in sports broadcasting.

“I’m really enjoying it and I’m really fortunate to be able to do it part time,” she says.

“Joe is great in that he doesn’t put any pressure on me to be in on certain days and at certain times and he is very flexible around my schedule, which is helping me an awful lot at the moment.

“Since the beginning of this year I’ve only been in Cardiff on five days! So, they are really supportive.”

Another benefit of being in Cardiff for the former Bath University student is the ability to train alongside the likes of world parkrun record breaker Charlotte Arter and fellow Welsh international Clara Evans, under the watchful eye of national coach Chris Jones.

“All three of us are coached by Chris Jones and supported through Welsh Athletics, so we’re really fortunate to have a great set up,” says Nesbitt.

“I think it’s showing now from our performances and our training that it’s a really good set up and it’s working.

“Both Charlotte and Clara are running really well at the moment. We are really able to push each other in sessions. It’s lovely to have such a nice group that we can all support each other and work with each other.”

Nesbitt hopes all the hard work will benefit her in Marrakech and beyond as she looks forward to an equally busy summer of athletics which will include the European Championships in Paris and the Tokyo Olympics.

“After I’ve done the cross country I’m going to run the Reading half-marathon at the beginning of April to try and secure a decent enough time to put me in the picture for selection for the European Championships in the summer.

“So I want to go there and run as well as I can, hopefully run a PB and see what happens from there. I guess that will decide the direction of the rest of my season.

Asked whether she had one eye on Olympic qualification, Nesbitt said: “More the Europeans, I feel that’s much more the realistic goal.

“British Athletics are yet to put out a selection policy so I’m not entirely sure what the time is that I need to run to put myself in the picture.

“But I feel it should be within my reach come the race in Highgate.”