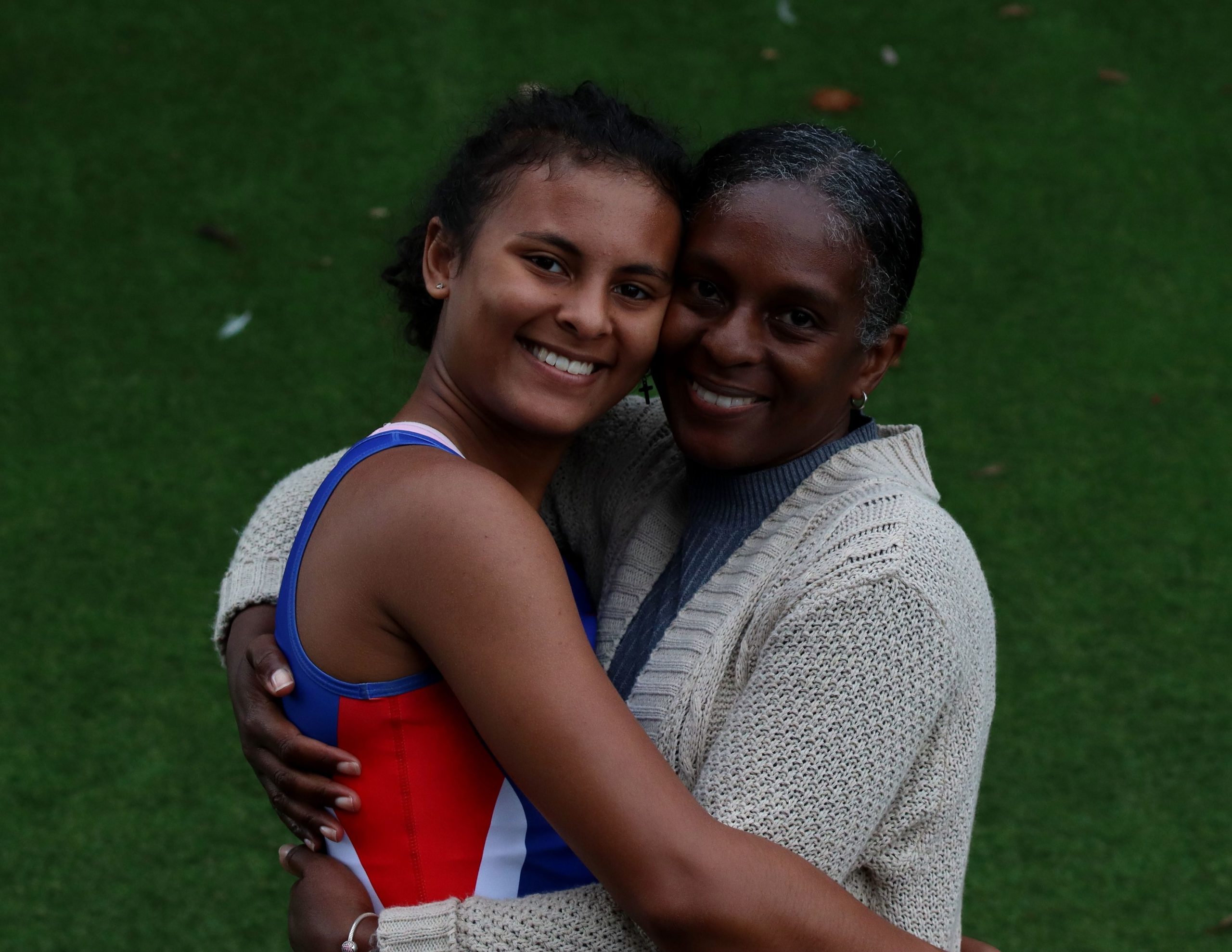 Sadie Graham-Mulvaney and her mum celebrate her win. All pics: Owen Morgan

Owain Lloyd-Hughes won the clash of Wales’ fastest teenagers in a blistering race at Swansea on Sunday.

The Neath Harrier just edged out Jeremiah Azu in one of the highlights at Welsh Athletics’ second post-COVID-19 lockdown pilot event of the weekend.

Lloyd-Hughes produced a fast finish to claim the win against Azu, who was last season ranked as Europe’s fastest teenager having clocked a lightning fast 10.27 at the Loughborough International.

Swansea Harrier Lemarl Freckleton was third in 10.66, which would have been a new PB but for the illegal tailwind.

Lloyd Hughes was delighted with the win and his form since returning from lockdown. Earlier this month he clocked a wind assisted 10.39 as he won in Nuneaton.

The Ystradgynlais athlete said he had been more fortunate than some during the suspension of athletics brought on by the pandemic.

“Luckily, just before lockdown began I installed a gym in my house, so I could carry on training,” said Lloyd-Hughes.

“Plus, I live in the middle of nowhere basically so I could train on the fields. So I’ve had a bit of training.

“I’ve been on the track for maybe the last month or so, it’s not a lot but I had kept my speed up and my endurance, it was just keeping that up during lockdown which was pretty hard. I’m guessing it’s paid off.

“For me, luckily I’ve done rugby in the past so I’ve been used to running on grass. Just before I came to athletics I was doing a lot of rugby and football, so running on fields is second nature to me, it’s really easy for me to run on them.”

But Lloyd-Hughes admitted running under the new restrictions, which were being trialled for the first time in Wales at Sunday’s pilot event, had posed some challenges – especially the distancing between athletes, who have to have empty lanes between them.

In each of Sunday’s races, which were held over 100m, 400m and 800m, only three socially-distanced athletes were allowed in each race.

“Warming up before the races has actually been easier,” said Lloyd-Hughes. “But then when you are actually running you’ve got that gap between athletes.

“Last week, I was running against Toby (Makoyawo) and he was in lane one and I was in lane eight, so it’s basically like running in training, you’re running on your own. It’s difficult. But today, we had three in our race so it wasn’t too bad, but you’ve still got that lane gap.

“It’s a nightmare because you can’t see where you are, when you are driving you can usually see that person next to you but as you come up you have to look across to see where they are and you shouldn’t do that.

“But that’s what it is I suppose. We have to get used to it. It’s going to be like this for a while. We’ve just got to deal with it.”

Cardiff’s Rebecca Chapman displayed her multi-event skills in race two of the 100m. Having competed in the javelin the previous day in Aberdare, the Commonwealth Games long jumper edged out Cardiff Athletics team mates Issie Tustin and Emmanuella Kone in a time of 12.28.

The fastest woman of the day’s races, some of which were mixed in order to seed athletes of similar speed together, was Winter Olympian Mica Moore, who clocked 11.96, finishing behind Cardiff men Eli Onyewu in 10.86 and Alex Azu in 10.97.

Steffan Dylan Jones produced the performance of the day in the 400m races as he held off the challenge of visiting Birchfield Harrier Tor Bennett Williams in a thrilling race.

The Swansea Harrier, who clocked a new personal best of 48.14 in London earlier this month, clocked 48.58 to win on his home track.

Cardiff’s Lana Culliford was the fastest woman over one lap with 57.44, edging clubmate Ffion Mair Roberts into second place in their heat.

Under-17 athlete Moli Lyons was the fastest woman over two laps, finishing in 2:17.79 ahead of Bridgend’s Ffion Higginson.

Like the throwers at Aberdare the previous day, all the athletes were just happy to be in action and adhering to the restrictions brought in to keep them and the officials safe.

There were still no spectators allowed, apart from one person accompanying each athlete, and every runner had to sanitise their hands after each race.

However, on a day when social distancing reminders were plastered all around Swansea University Athletics track, the top two finishers in the final 800m race of the day were separated by just 0.03 of a second.

There was absolutely nothing between Team Bath’s John Howorth and Cardiff’s James Heneghan as they sprinted down the home straight.

But it was England Under-23 athlete Howarth who took the win right on the line in a time of 1:52.00.

However, Welsh international Heneghan could console himself with a big new personal best of 1:52.03.

Social distancing also went out of the window when Sadie Graham-Mulvaney won the first 100m race of the day.

However, no restrictions were broken as the Cardiff athlete was hugging her mum in celebration of what she thought was a big new PB. Unfortunately her time was later revised outside of her best, but it was still one of the highlights of the day when track athletics finally returned to Wales.