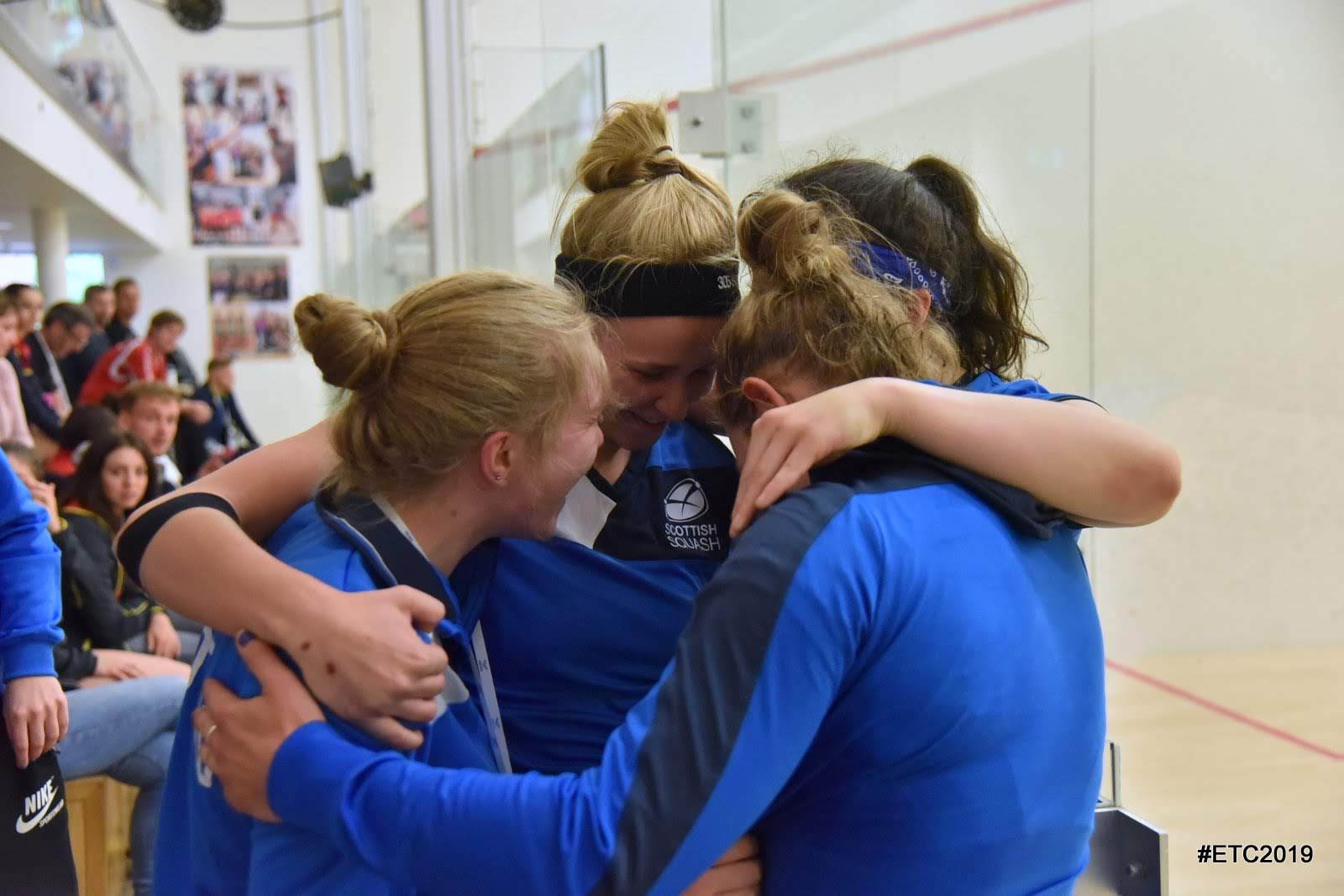 Wales are battling for to finish the European Team Squash Championships on a high at Edgbaston Priory.

Both men’s and women’s teams will finish outside the top four in their events and are in the 5th-8th play-offs.

Wales women slipped to a 2-1 defeat against Scotland with Tesni their winner.

Scotland gatecrashed the semi-finals on ETC day two at Edgbaston.

The second day’s play at the 2019 Championships in Birmingham saw all the Division One teams playing their third and final pool matches, with the outcomes determining the line-up of Friday’s semi-finals.

While women’s and men’s top seeds, England and France, confirmed their places in the last fours, it was Scotland who stole the show with wins to back up yesterday’s upsets to also book both teams into the semi-finals.

The day opened with England’s men taking on Spain. In the opening match Iker Pajares took the game to Declan James, who fought back from losing the opening game and took the third and fourth on extra points.

England took the next three matches more comfortably to record their third win and top Pool B at Spain’s expence.

In pool A, Scotland, who had upset Germany and then snatched a dramatic draw against top seeds France, despatched Hungary 4-0 to confirm their place in the semis.

Meanwhile, France fell behind to the Germans as Simon Roesner fought back from a game down to win.

Baptiste Masotti, as he did against the Scots, let a two game lead slip but this time recovered to take the fifth and put France back on track as they eased through the final two matches to top the group on games countback ahead of Scotland.

“We knew the pool stages would be tough without our top players, so we were ready for that,” said French manager Renan Lavigne. “We made it harder for ourselves with the draw against Scotland, but I’m proud of how the boys came back in to finish top of the group.”

England’s women won their third straight pool A match, beating the Netherlands 3-0, although Sarah-Jane Perry was taken to four games by Milou van der Heijden in the top string.

Second place would be taken by the winner of Wales and Scotland, and after the first two matches were shared a tense decider ensued.

Scotland’s Georgia Adderley prevailed, coming from a game down to beat Stacey Gooding for a second successive Scottish seeding upset and a semi-final spot.

“I feel privileged to be able to lead this team out for the semi-finals tomorrow,” said Scotland’s number one and captain Lisa Aitken, “They all inspire me in different ways. “It’s a pity I couldn’t win the second match so it went to a decider, but the team did great.

Second seeds France, who have met – and lost to – England in the last five women’s finals also won for a third time, but Belgium came so close to creating a massive upset.

Tinne Gilis, who won the decider in their first two matches, put Belgium ahead, and then elder sister Nele took world number four Camille Serme to the brink of defeat.

With Scotland creating double upsets on day two, the last word goes to Scottish national coach Paul Bell says: “This is what we’re aspiring to do, challenging at the major events and this is the first step.

“We’ve come with two young teams and for them both to reach the semis is a tremendous achievement. Hopefully we’re setting our stall out for the future.”