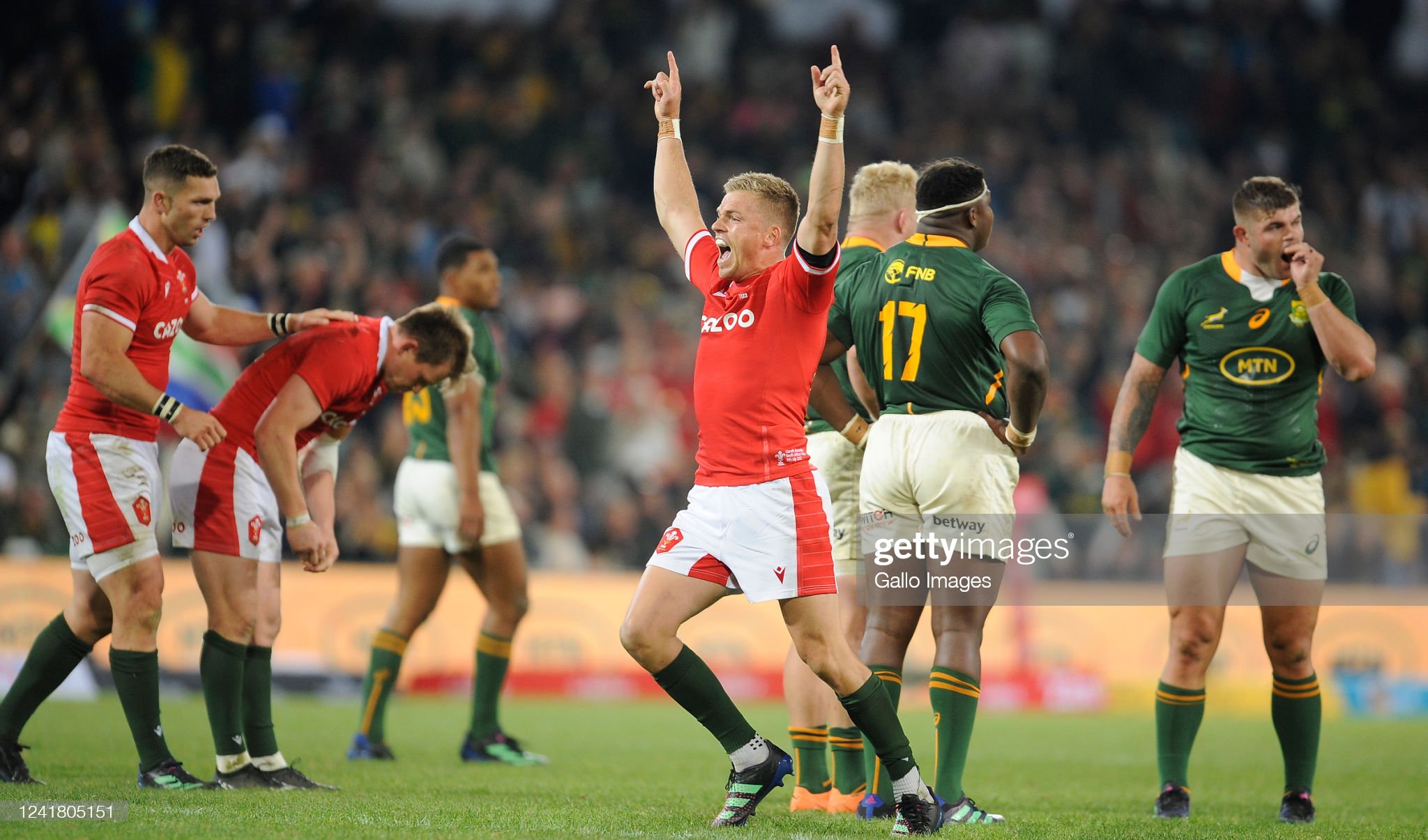 They say respect must be earned, not just given.

It seems the concept has been lost on the South African media, despite Wales claiming a hard-fought 13-12 historic victory in Bloemfontein last Saturday.

That win has set up a much-anticipated series decider in Cape Town this weekend. Who would have thought it?

Not many South Africans, that’s for sure.

A tense encounter in the second Test saw Wayne Pivac’s men display tremendous heart to stay in touch with a much-changed Springboks side before replacement wing Josh Adams delivered a telling body blow with a try in the corner on 78 minutes.

Another replacement, Gareth Anscombe, delivered the knockout punch with a nerveless touchline conversion which sealed the first victory over the Boks on South African soil in Welsh rugby’s rich history.

The victory was the rugby equivalent of rope-a-dope, which boxing great Muhammad Ali perfected during his famous win over George Foreman in the Rumble in the Jungle in 1974.

According to Ali’s trainer Angelo Dundee, the idea for the on-the-ropes strategy against the more powerful Foreman was suggested by boxing photographer George Kalinsky.

“Sort of a dope on the ropes, letting Forman swing away but hit nothing but air,” said Dundee years later.

Welsh Rugby team player, Will Rowlands, says: “We had a chance to meet the kids. I was up on the surgery ward and it was nice to say hello. Doing something like this today is very special.” pic.twitter.com/1nK8oDaNBM

It is hard to imagine a photographer suggesting to Pivac and Co that they should employ the same tactics to ensure a historic Welsh victory.

No doubt, some of Pivac’s harshest detractors may be happy to find some truth in the suggestion.

The build-up to the match had focused on the 14 changes to the South African side. However, many sections of the media chose to label the selection a ‘B Team.’ Rugby great Gareth Edwards even branded the selection ‘disrespectful.’

South Africa’s assistant coach Mzwandile Stick claimed that the critics were ‘disrespecting the Springboks emblem’ and that the side led by World Cup winner Handre Pollard were ready to inflict pain on Wales.

“The funny thing about people talking about our team being a B team is some of those players have played in the URC final and semi-finals. So I don’t want to go to the Welsh side and say they had no teams in the playoffs. Then all of a sudden, they can judge and say these guys are a B team,” said Stick.

Much was made of the intensity Wales would face at a ground nicknamed ‘The Graveyard.’ – or the ‘Die begraafplaas’ as it is known in Afrikaans.

Fly-half and captain Pollard even warned that the supporters were passionate at ‘The Graveyard’ and help create an intense atmosphere at the ground, which Wales would struggle to cope with.

🇿🇦 v🏴󠁧󠁢󠁷󠁬󠁳󠁿3rd Test | Josh Adams: ‘We must be clinical to clinch Test series’

At a media conference ahead of the match, Pollard was asked if his side would ‘bury Wales, to which he just smiled and said: “Yes, that’s the plan.”

So, despite Pivac’s men outplaying the Boks for significant periods of the first Test and coming within a few minutes of claiming victory before losing 32-29, respect still hadn’t been earned.

Boks assistant coach Stick added: “These are proper players that have earned their stripes and deserve their opportunity. If they want to say it’s a B team, they must come and speak to us after the game, and the result will speak.”

Indeed, the result did speak, unlike Stick, who has yet to comment publicly on his side’s defeat.

Many others have spoken, though; it seems South African voices find it tough to give Wales any credit for their historic victory and prefer to lambast the men in green.

Writing in a column for an online news publication, The South African  journalist Craig Lewis wrote:  “In fairness, the national coaches will surely, in hindsight, realise that they made an error by completely overhauling the matchday squad rather than mixing some first-choice regulars with some back-up players who deserved an opportunity.

“It’s clear that the Boks didn’t get their selections for this Test correct in every aspect, but there really was very little to lose in the grand scheme of things.

“For Saturday’s third and decisive Test, there is every reason to believe a full-strength Bok side will achieve a comfortable victory. Ultimately, this would enable them to reflect on the Bloemfontein clash as a worthwhile ‘experiment’.”

Lewis claimed that South African rugby had lost nothing in Bloemfontein.

“Yes, a historic defeat was disappointing, but this will always be that game where the Boks lost because they made just too many changes all at once. Yet, there is no doubt that the Springboks coaches will hardly be panicked by this disappointing result,” he insisted.

Ahead of the match, The South African was more than happy to run the headline: ‘All Blacks sink to lowest world rugby ranking EVER after Ireland shocker,’ following Ireland’s 23-12 victory over  New Zealand.

Little did they imagine that the Boks would slump to third in the world rankings come the evening following their defeat to Wales.

But don’t worry, according to journalist Zelim Nel the defeat to little old Wales is all part of a marketing masterplan devised to generate much-needed Rand for the struggling South African Rugby Union.

“On Saturday, Rassie cashed in that chip to prove a point to his critics, restore the pecking order in the Bok squad and tick a box commercially,” claimed Nel.

“Rassie sacrificed a Test match for things he views as a strategic gain. For starters, the Bok squad in Bloemfontein was loaded with fan favourites that Rassie has no intention of taking to France next year.”

All eyes on the prize 🪄

We will have to adapt an unprecedented game plan if we are to beat Wales this week. #Springboks pic.twitter.com/00B2lk4tEF

“Public interest would have been a key factor in the decision to depower the world champions for the second Test. A Bok win in Bloemfontein would have clinched the series, turning the third Test into a dead rubber and a laboratory for experimental selections,” said Nel.

He went on: “Unfortunately, these are hardly hallmarks of an enticing prospect for potential ticket purchasers. By losing in Bloemfontein, Rassie ensured the first Bok appearance at an open Cape Town Stadium is a decider and a sell-out – a result that will be seen as a masterstroke by his employers.”

So, there you have it.

Oh, and he provided a much-needed cash injection to the SARU coffers.

True to form, South African arrogance is alive and kicking – as if we ever doubted it.

Not even the most shamelessly partisan Wales supporter will for one second dare to suggest that Pivac’s men were well on top in the second Test.

A STRONGHOLD IN THE NORTH
As Bodelwyddan-born tight head Sam Wainwright joins the Wales bench v @Springboks, set to become the latest in a long line of North Walian caps, we pick an impressive team of those to have gone before (& George North!) #SAvWAL
📰https://t.co/eWxM3fBAsK pic.twitter.com/R8NYlIiGC0

Still, yet again, the men in red stood toe-to-toe with the current world champions – this time claiming the victory they have longingly ached for.

They say fortune favours the brave, and boy were Wales brave. The Boks attacked but time and again, the red wall stood firm as South African battering rams repeatedly battered it, trying to find their way over the try line.

Unlike the first Test, where Wales again had the all too familiar ‘brave losers’ crown bestowed upon them, they were brave but victorious this time.

It wasn’t just the fact that the Welsh defensive structure remained unbreached throughout the game. The composure they displayed in the final 15-minutes of a match in which they had been Bok-bashed throughout, deserved immense credit.

The victory – and this tour – represents so much more for Wales and deserves to be given credit.

Players like props Dillan Lewis, Gareth Thomas and Sam Wainwright, along with hooker Ryan Elias, flanker Tommy Reffell and lock Will Rowlands, have all come of age on this tour.

The same can be said for scrum-half Kieran Hardy.

South Africa no longer holds the fear factor over Wales in the way New Zealand continue to.

Whatever transpires in the winner-takes-all series decider on Saturday, Wales have proved that despite their lowly ranking of ninth in the world, they can still dance with the big hitters of world rugby.

Another strong confrontational display from Wales would have South Africa reeling on the ropes.

Another sucker punch to win the Test series would make a statement to the rugby world that few could ignore – but plenty would find hard to praise.