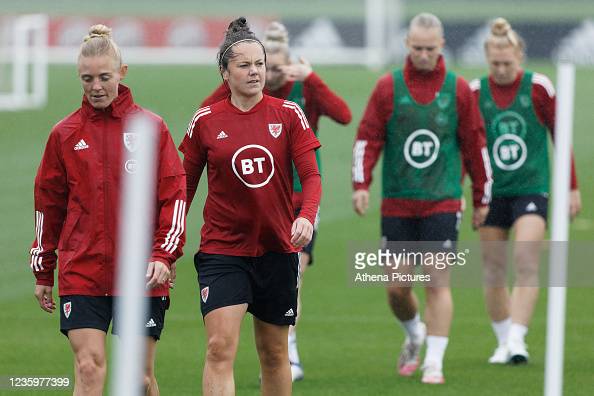 Sophie Ingle’s team sit second in the Group I table after two wins over Kazakhstan and Estonia last month, but preparations are well underway as they take on Slovenia on Friday night, in their 200th match and Estonia on Tuesday, hopefully in front of a big crowd.

Gemma Evans, Ceri Holland, Rachel Rowe, and Natasha Harding scored one each with Kayleigh Green getting two in the back of the net, with Kazakhstan struggling to get out of their half for the majority of the match.

Estonia proved to be a tougher game for Wales.

Natasha Harding scored in the fifth minute but that was the only goal of the game, giving Wales another win.

Wales skipper, Ingle said: “Slovenia were a great side against France, I think they’ll have different strengths compared to the last two teams we played.

“I think they’re really good in their transition to attack when they win the ball back.

“You know, they go towards goals straight away and I think as long as we nullify that as their strength, then there’s no reason why we can’t get the result that we need.”

“They stick to their strengths of you know, their transition team.

“When they win the ball back they go straight towards your goal with numbers coming up you and I think they hurt France in those positions.

“And potentially France were a little naive in my own opinion looking at the game anyway.”

“But yeah, they are a really good team and it’s not going to be an easy game out there on Friday.”

Ingle added, “It does come around quick I think it was only three and a half weeks since the last camp which is crazy but yeah, obviously the girls are excited to get back in.

“Estonia, you know, on paper are ranked a lot below us.

“They defend really well, so every game is different and we have to adapt to that and I think that’s really important.

“With us as a team that that’s what will, you know, we’re getting better at adapting to the opposition we’re playing against”

Hannah Cain could win her first Wales cap after missing out on the first two matches of the campaign last month.

“She was meant to be in last campaign unfortunately had an injury the week prior.” Ingle said.

“It’s obviously hard to notice straight away but she’s mingling around the team.

“She’s talking to everyone, which is a good sign because you don’t want someone to come in and be a bit reserved.

“I would like to hope we’ve welcomed her in to make her feel that way.

“But yeah, she’s an attacking threat and potentially has another threat on board for us.”

This week, in a bid to support female footballers from online abuse, the Football Association of Wales and the Welsh Government have joined forces to tackle online hate towards girls and women.

Ingle said: “It’s massive for us and you know, us as a team, we’re always trying to support and help who we can and I think things like that are happening, you know, on social media is unacceptable and so as a national team, we have these profiles as players that we should be doing more.

“We want to do more and I think coming together as a collective within the Welsh Association and our media team put things in place for us to be able to express ourselves and hopefully support people who maybe feel that they don’t have anyone to talk to but we know it’s very unacceptable to abuse anyone.”

Friday’s match will be Wales Women’s 200th game and the celebrations are already well underway.

From the squad announcement being done by previous players, Ingle said a lot of things have changed from when she first started playing.

Ingle said: “It’s obviously an honour, It’s crazy to think I’ve played over half of those games.

“I still think I’m quite young, but no, it’s It is incredible and it’s just amazing to see the change within the women’s game of the last few years.”

“Even just little things like our kits, you know, when I first joined the playing kit was like a large men’s size say for example, so the sleeves, it was meant to be short sleeve, but it was down my arm, the shorts were massive and now we have a kit that actually fits us.” She added

“The youngsters don’t know that because they’ve never had to be in that position so that’s why we always try and we obviously joke about it, but we try and teach them that how far the game has come and you know, they should be really excited that they have these things in place now.

“Us as experienced players keep telling the younger ones how much it’s changed and how lucky they are now that they’re in this position, but we have to keep pushing on and we have to keep you know, going for more and trying to be better every single camp.”