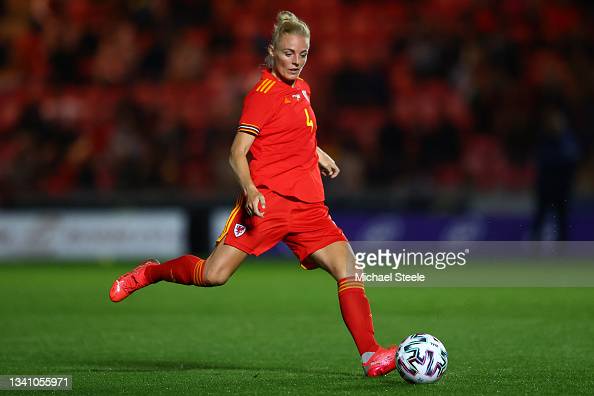 “Training was really good today, a good vibe on the training pitch, and yeah, everyone’s excited to get going again on Tuesday.”

With her team scoring two goals in the first half, two in the second half and two in extra time, Ingle added: “You do feel for the opposition at times, they were struggling and you could see their heads going down.

“We’ve been in that position before so you just have to be relentless and try and get as many goals as you can, because, at the end of the day, it could come down to goal difference.”

🏴󠁧󠁢󠁷󠁬󠁳󠁿 6-0 🇰🇿 | It was a fantastic start for @Cymru in their opening #FIFAWWC qualifier in Llanelli. #BeFootball | #TogetherStronger

Positivity has been radiating from the side since Gemma Grainger took over earlier this year, Ingle added: “That always happens when a new manager comes in, it’s a fresh start for everyone.

“Everyone can put the past in the past and move on and I think that’s shown with Gemma coming in.

“The way we’re playing together and we’re trying to link up play but also still be defensively strong and win the ball back as quick as we can and as high up the pitch as we can.

“We are expected to win and that is a good expectation.

“We should be expecting to win these games, we have to be confident and I think that showed that the other night.

“At times we’re trying to get the ball down and play and link-up play because we’ve got good enough players in the pockets out wide who can deliver the ball into the box, cut back and we’ve got people who can finish as you’ve seen.

“Rachel Rowe’s goal, outstanding, I didn’t even realise how far out she was until I watched it back after the game.”

“Those scores sum up the women’s game, that there’s still a massive gap between ultimately the top teams and the very bottom teams.” Ingle added.

“You’d like to hope, those teams at the bottom are hopefully getting support from their national team and the last few years, the FAW have done everything they can for us as a women’s team to keep pushing and gaining momentum and that’s showing on the pitch now with our results.”

Grainger said: “I think at this stage in any competition, because of the seeding and the size of the groups, certainly the expansion of the world cup this year as well, that’s going to happen.

“I think certainly at the other end, at the tournaments, that’s where we’re going to see the where the margins are even finer.

“I do think there’s some good work being done by EUFA with some of the smaller nations around building their programmes, so I know that’s something that is quite progressive but I guess the reality is that while other teams are catching up, the higher-ranked teams are pushing on which can only be good for the game.”