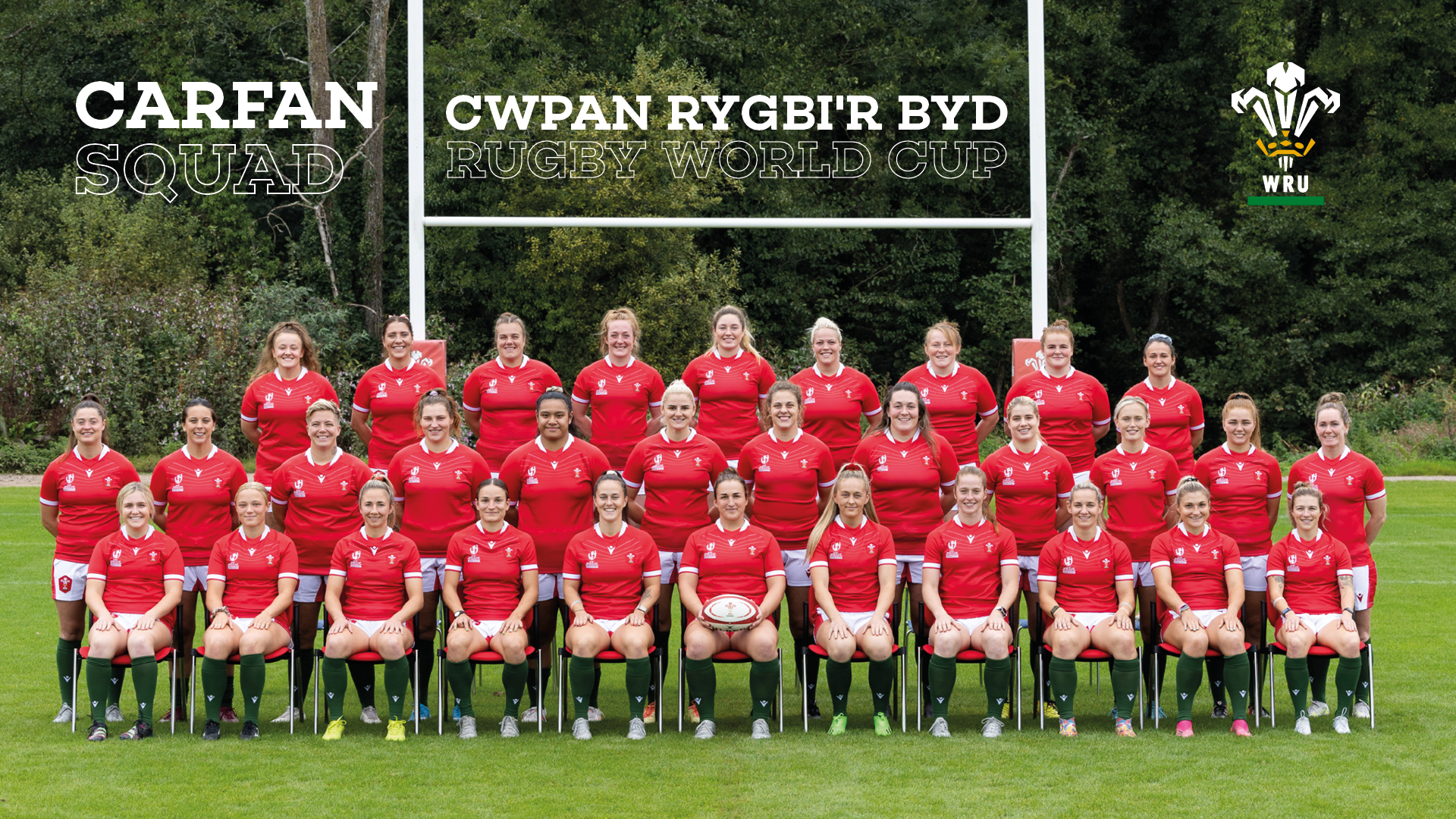 The 32 players Wales will take to the World Cup. Pic: WRU.

Wales coach Ioan Cunningham believes he has two top quality leaders in his squad after naming Siwan Lillicrap as captain and Hannah Jones as vice-captain for the upcoming Rugby World Cup.

Lillicrap will lead the group – as she did in last season’s Six Nations – although Jones took over the captaincy for the team’s most recent Tests against Canada and England.

Wales have been drawn in a pool with Scotland, hosts New Zealand and Australia for the tournament next month, where Cunningham believes both players’ influence will be crucial, whoever is wearing the armband.

“Siwan is a brilliant captain on and off field,” said Cunningham.

“She has a great tactical mind and an understanding of what calls to make at what moment. Her communication with referees and her game management skills are second to none.

“She certainly benefits the team in many ways.

Your 🏴󠁧󠁢󠁷󠁬󠁳󠁿 squad heading to the @rugbyworldcup in New Zealand

“Having said that, we are growing our leadership group and Hannah has led the team by example against Canada and England this summer. Her work ethic is high and she is going to be a strong leader too.

“Hannah is learning a lot from Siwan and the two have worked together in recent weeks. The pair complement each other in many aspects.”

The tournament starts on October 8 and three players – Sioned Harries, Elinor Snowsill and Caryl Thomas – are set to participate in their fourth World Cup.

On the flip side, 19 players could make their Rugby World Cup debuts.

“There were a few robust discussions and you are always looking at combinations, scenarios we could face over a long period in New Zealand and importantly, ways you can get the best players on the pitch but overall we are pleased with where we are,” added Cunningham.

“We’ve had two tough warm-up matches which was exactly what we needed, and we’re just very excited at what’s in front of us.”

The newcomers include Lowri Norkett, whose sister Elli played in the 2014 Rugby World Cup. Elli passed away in 2017 aged 20.

For those who have inspired us on our journey.

The road to New Zealand has only just begun. Take a look at the team 👇🏴󠁧󠁢󠁷󠁬󠁳󠁿https://t.co/f1e2Vb8ZEk@vodafoneuk | #HerStory pic.twitter.com/rF4AmO0bVD

Norkett said: “It’s been a bit of a whirlwind to be honest. From getting my first cap in Canada, to getting a contract up to December to booking my ticket to New Zealand, it’s been an incredible month.

“I think coaches reward hard work and even though I didn’t get a contract the first time around, I kept working hard and it’s paid off.

“My fondest memories of Elli are of going to watch her in France in the 2014 Rugby World Cup when she was just 17. It’s amazing I’m going to do the same now. She’s been my inspiration every time.

“I’ve had to work very hard to achieve this whereas everything came very easy to her. I’m a bit lost for words to be honest. My family and fiancé are obviously very proud.”

Cunningham added: “As a coach, you are always delighted when someone works really hard and forces their way into a team or squad.

New Playing Contracts Should Be Only The Start, Says Wales Captain Siwan Lillicrap

“Lowri Norkett is one of those. She has come in, trained her socks off and fully deserves her place,”

“We have players experiencing their first World Cup and what an opportunity to do that in New Zealand and we will obviously draw on the experiences of Sioned, Elinor and Caryl during the tournament.