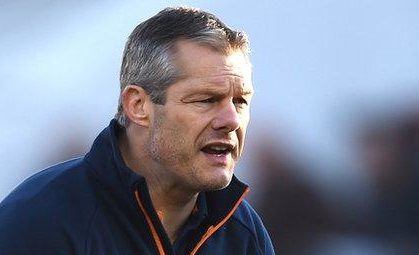 Byron Hayward has left his role of Wales defence coach after less than a year.

Wales‘ defence coach Byron Hayward has paid the price for the poor start under new coach Wayne Pivac and is stepping down from his role immediately.

The former Wales U20 and Scarlets coach joined the coaching team in 2019 but has left his role by mutual agreement ahead of the upcoming Autumn Nations Cup campaign.

The shock news comes just days after Wales finished a poor fifth in the Six Nations just one year after being crowned Grand Slam champions under Warren Gatland’s coaching team.

The existing coaching team will manage the defence for the Autumn Nations Cup which starts against Ireland in Dublin on Friday.

That’s not a good start at all
Byron is a top man and needs time and support like the rest of the coaching team
❤️💚❤️💚🤷‍♂️🏉 https://t.co/kidQlpdVH7

Head coach Pivac said: “I would like to thank Byron for all his hard work with Wales and thank him for his honesty in recent meetings.

“I have worked alongside Byron for six and a half years, he is a dedicated coach that has had great success in his career.

“On reflection of the last campaign it was mutually decided that the best way forward for Wales and for Byron is for him to step down from his role.

“I, on behalf of the squad and management, would like to wish Byron all the best for the future.

“In the short-term, for the upcoming four matches, the existing coaching team will manage the defence based on the foundations already put in place. We will then look to replace Byron on a full-time basis with an announcement in due course.”

Pivac and his new coaching team started with wins over the Barbarians and Italy as they took over from Gatland following last year’s Rugby World Cup where Wales lost to eventual winners South Africa in the semi-final.

But since then they have lost five games in a row and the defeat by Scotland rounded off a disappointing Six Nations Championship where only Italy finished below them.

Wales’ defence came in for harsh criticism after prop Stuart McInally was powered over for the try to give Scotland their first win on Welsh soil in 18 years.

Hayward said: “I have thoroughly enjoyed my time with Wales and it was an honour to coach my country.

“As I have always said from day one, the team comes first and upon reflection of the last campaign with Wayne we felt it was best for me to step aside.

“When I took the role last year I wouldn’t have planned to be leaving as the squad prepare to start the new international season, I believe it is the right decision for myself and the squad as they enter a new campaign.

“I would like to wish Wayne and the squad all the best going forward and I will be fully supporting them.”