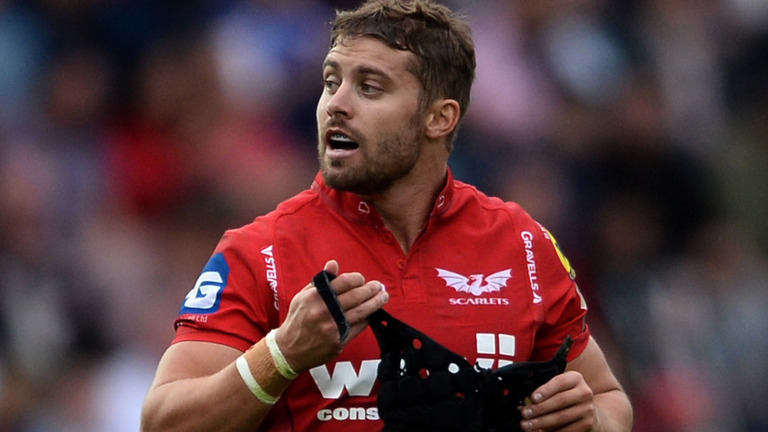 Leigh Halfpenny will be back to boost Scarlets after concussion absence. Pic: Getty Images.

Dai Sport’s rugby columnist Robin Davey is getting  in the festive mood as he looks ahead to the holiday derbies where the grounds, hopefully, will be packed as local rivalries come to the fore, recent defeats in Europe now in the past,  though with maybe a few players looking to lay down a marker as Warren Gatland looks to his Sin Nations options for Wales.

IT’S derby time when grounds will be packed over the holiday period and the battle for who’s best, east or west, will resume.

Largely because of the Dragons’ ineffectiveness – to put it politely – the west has generally proved to be best which would delight the late, lamented Ray Gravell.

First up on Friday night is Cardiff Blues hosting the Dragons followed next day by the Ospreys-Scarlets clash at the Liberty.

The Dragons haven’t beaten their nearest rivals for the past four years and in the corresponding fixture last year at Rodney Parade the Blues triumphed 22-17, at the same time recording the double. They scored three tries to two, one of the Dragons pair a penalty try.

This time around the Blues will be hot favourites even if they go in on the back of a double defeat at the hands of Saracens in the Champions Cup, no disgrace that considering Saracens are top of the Premiership.

The Blues have been hard hit by injuries and now that they’re out of Europe can, as they say, concentrate on the league.

They lie in fifth position in Conference A of the Guinness Pro 14 with four wins and six defeats, though not particularly impressive a whole lot better than the Dragons who lie just one place off the bottom of Conference B with three wins and seven defeats to their name.

They are also in some disarray having just parted company with head coach Bernard Jackman after a series of heavy defeats.

Rather than rush into an interim appointment as Jackman’s successor the board have now decided to bide their time and install a full-time head coach early in the new year.

Chairman David Buttress says they have been inundated with applications and he has already begun the process, confident he will engage a world class replacement at the helm.

Meanwhile, forwards coach Ceri Jones will adopt the unfamiliar role of head coach for the festive derbies against the Blues, the Ospreys on December 30 and the Scarlets on January 5.

Cardiff Blues chief John Mulvihill has highlighted the problems facing the Welsh regions in Europe-basically a lack of money. He claims that of the 20 teams in the Champions Cup competition they rank rock bottom in terms of funding.

That is the harsh reality when it comes to Europe but it still won’t inhibit the appeal or the ferocity of the festive derbies.

The Blues will surely emerge triumphant again especially as the Dragons are yet again without key back row forward Ollie Griffiths whose knee injury will keep him out for six weeks and centre Tyler Morgan who suffered concussion against Clermont last week.

The Ospreys-Scarlets game will probably be on a different level for they are invariably full-blooded clashes between these two volatile neighbours.

The Scarlets did the double last season, edging the corresponding derby 12-9 thanks to an 82nd minute try by John Macleod to the delight of a big 14,509 crowd.

The return was a surprisingly one-sided affair, the Scarlets romping to a record 40-17 victory over their rivals in May.

They will be boosted by the return of full back ace Leigh Halfpenny on Saturday, finally recovered from the concussion suffered playing for Wales against Australia.

There are rivalries all over the field in this one, none more so than in the centre where Scott Williams, also recently returned from injury, will be out to make a mark for the Ospreys against his former teammates while also staking a claim for a Wales recall.

This one promises to be a tight affair with little to choose between them, the Ospreys out for revenge after conceding the double last season.

The Scarlets have tumbled out of Europe after their heroics last season when they reached the semi-finals of the Champions Cup, losing all four of their pool matches, an uncomfortable statistic for them. Victory at the Liberty will help put their season back on course.

Meanwhile, a happy Christmas and enjoy the derbies!