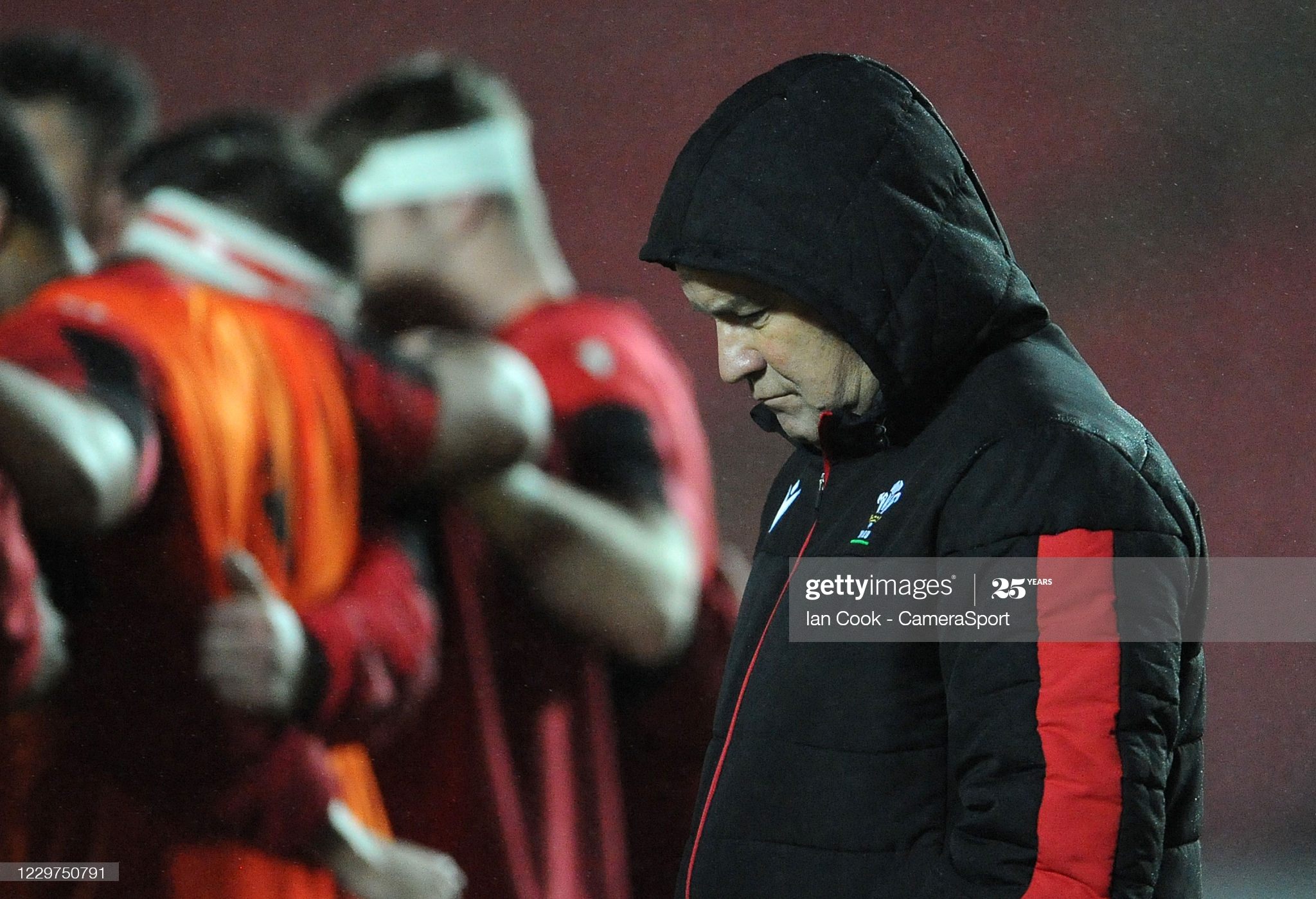 When Wales meet Italy in Llanelli on Saturday, it will be for the less than cherished title of fifth-place play-off winners of the inaugural Autumn Nations Cup.

If that title doesn’t sound too grand then it’s because Wales’ result have not been either, during the fractured year of 2020.

Wales won 42-0 in Cardiff that day but a run of six straight defeats followed as they suffered their third-worst run of results of all time.

An 18-0 win over Georgia snapped the streak and Wales battled hard in going down to a 24-13 defeat to England on Saturday.

The irony was the improvement under their new coaching regime was a nod to the past rather than the future.

That the men in red stayed in the contest against Eddie Jones’ Six Nations champions was almost entirely down to a huge increase in physicality, better collision work, and a never-say-die attitude.

All three of those characteristics were a near constant for Wales under the successful tenure of Gatland. Pivac is trying to evolve that game plan, but he is not there yet which may explain why his team reverted to type in trying to keep tabs on the English.

Wales fans are still waiting to see the expansive rugby Pivac is looking to bring.

There was no sign of it against England. Their try from Johnny Williams came from a Dan Biggar charge down, but other than that they didn’t really look like scoring.

Their attack has been close to non-existent this autumn, predominantly because their forwards have been either smashed to bits physically or been unable to lay a platform from the set-piece.

The second of those faults again reared its ugly head against England. Referee Romain Poite penalised Wales five times at the scrum and the home side also lost four line-outs.

So, is that what it has come to now for Wales – trying to find a way to just stay in the contest?

It was only last year they were putting England to the sword under Gatland to claim a Six Nations Grand Slam. A lot has changed since then and Welsh rugby is no different.

“We are building for 2023 and there is definitely a good mix of youth and experience. The boys have got used to training together and knowing each other,” centre Williams said.

“We are just going to get better and better. I know fans have been going nuts, but just keep your patience with us. We will keep building.

“England was a big improvement. We have made up a lot of ground and we will keep moving forward. We were ready for the physical battle and I think we were physical ourselves.

“Of course we are not happy with the scoreline, but we are happy with how we are building. We have got to be better again than we have been against Italy and we will be.”

Pivac was furious with Poite’s scrum interpretations and will air his grievances with World Rugby this week. He also felt England’s first try from Henry Slade should not have stood because in his opinion fly-half Biggar had been taken out by Sam Underhill in the air during the build-up to the score.

Pivac’s points certainly have at the very least a degree of merit, but at the same time you never really felt England were going to lose. They always seemed to have Wales at an arm’s length.

“We’re under no illusions that it was England,” said Williams’ midfield partner Nick Tompkins.

“We know the rivalry and know how all our fans feel about it so we aren’t happy we lost by any stretch of the imagination.

“It sometimes feels we shoot ourselves in the foot and our mistakes are our undoing, but if we look at the positives we are in these games. We have to figure out better game management.”

Williams – who has scored for England at Twickenham in a non-capped Test – was Wales’ main positive with a powerful centre performance.

Please #WaynePivac can you do the #Regions one favour for the holiday season. All the players you don’t intend to play against @Federugby send them home. Let us have our players back, we need them even if you don’t !

He is likely to start again when Wales will wrap-up a disappointing first year under Pivac’s guidance against Italy on Saturday. The England loss was Pivac’s seventh from nine games as coach.

“I believe the rules that have come in around the breakdown have made it a lot harder to attack,” said Tompkins. “How the rules are and how quick referees are to give penalties away for holding on, it makes you want to kick the ball away a bit more and put a team under pressure.

“It’s frustrating from a backs point of view, but you have to adapt.”

Pivac must win against Italy and Wales probably will do.

The New Zealander continues to insist his team are heading in the right direction, but they are likely to end 2020 without having beaten a tier one side other than the hapless Azzurri.

Pivac will know Wales can do much better. The 2021 Six Nations will be his acid test and the tournament on which his future will be judged.

“I take note of the players and listen to them. Alun Wyn Jones spoke in the dressing room after the game and the players believe we’re heading in the right direction,” Pivac said.

“They believe it’s not far away and we’re seeing the fruits of the labour of the last few weeks. We just need to keep working very hard as a group and believe in what we’re doing.”