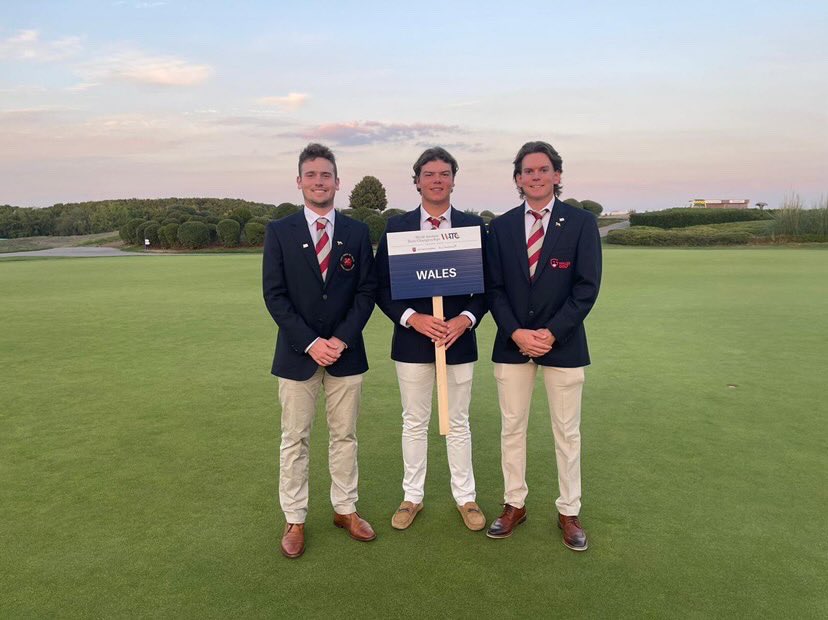 Wales golfers have finished in the top 10 of the world in both the individual and team events at the Eisenhower Trophy World Amateur Team Championships.

The trio of Archie Davies, James Ashfield and Luke Harries finished tied eighth at the team event in France. Davies finished tied ninth on the individual leaderboard, up against the world’s best amateur golfers.

It is the best Wales result in the competition since 2006 when Nigel Edwards, Rhys Davies and Llewellyn Matthews finished fourth. Edwards also finished tied seventh alongside Rory McIlroy that year.

Italy won their first-ever team title, with Sweden and the United States in second and third, while Sweden’s Tobias Jonsson won the individual accolade, edging out Japan’s Taiga Semikawa and Austin Greaser of the US. 71 nations competed.

“They are a special group of players and this was an amazing result, they played well from start to finish – three good players who also get on very well and were a pleasure to captain this week,” said Wales Golf Performance Director Gillian O’Leary.

“The three of them have had good seasons and were well prepared going into the event, there was a quiet confidence within the team at the start of the week.

“It has given them great confidence, showing Welsh golfers can compete and belong on the world stage. We have already identified areas to improve on and are working towards the event next year.

“I must also pay tribute to the support they have had, not just this week but over the previous months and years, from national coach Neil Matthews and the High Performance team. This result is due to the tireless work of everyone involved with Wales Golf High Performance.”

The International Golf Federation event, named after the former US president and keen golfer Dwight D Eisenhower, was held just outside Paris.

Wales were also the highest placed of the Home Nations, with England 14th, Ireland 19th and Scotland 33rd.

The format over four rounds was the best two scores each day counting towards the team event, with Davies’ score counting every day and Ashfield and Harries counting twice each.

Carlisle’s Davies opened up with a 65 to put himself among the front runners, a final round of 71 saw him slip down the leaderboard. Delamere Forest’s Ashfield added a 69 and a 70, with Tenby’s Harries scoring a 68 and 74 in the team cause.

“Archie started well and that gave confidence to James and Luke after that first day as well. Archie was up there in the individual event on the last day.

“He has been managing a small knee injury and was a little disappointed, but overall he can be very happy and it is encouraging for him that he was challenging for a medal finish throughout the week.

“All three men will take confidence from this and it certainly puts them on the radar for the Walker Cup next September.

“It also backs up the vision in our high-performance plan of aiming for our players to win on the world stage, everything we have been doing in the last few years has been about preparing our players for these big events.

“There have been some tough decisions behind the scenes in order to focus on world events, but this validates that and shows we can compete at world level.

“This will bring confidence and opportunities to other players as well, the boys coming through behind and also the women, to hopefully inspire future teams.

“The belief is not just for these three players but for everyone in the Wales Golf system. Our philosophy is to help their individual performance as much as possible and then support them to work together when they form a team.”

The Eisenhower Trophy for men and Espirito Santo Trophy for the women, the World Amateur Team Championships, will be held in the Middle East next year moving the normally bi-annual competition to odd years from then on.