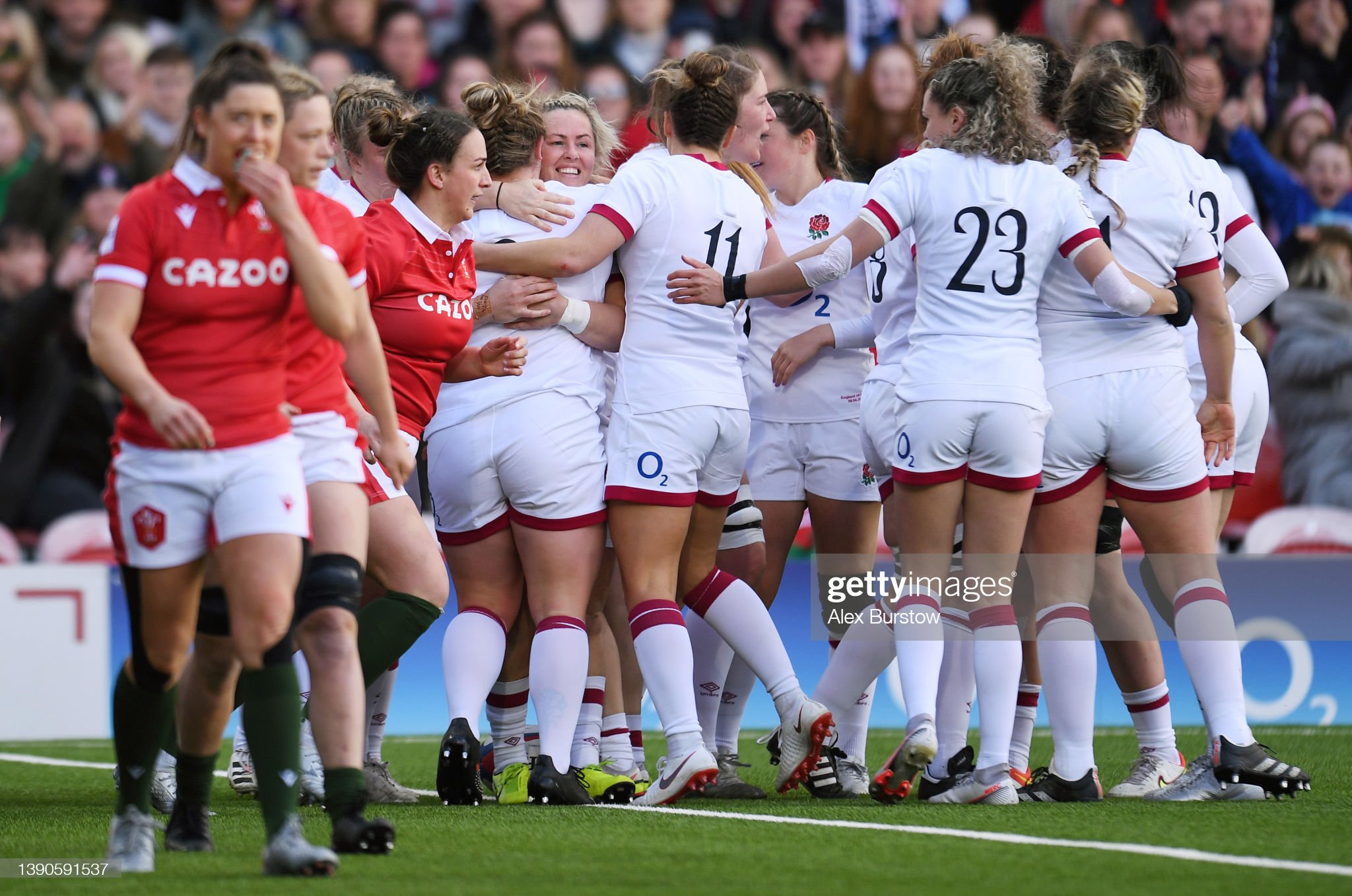 Lark Davies of England is congratulated by Marlie Packer, Sarah McKenna and teammates after scoring their team's first try during the TikTok Women's Six Nations match between England and Wales at Kingsholm Stadium on April 09, 2022 in Gloucester, England. Pic: Getty Images.

England coach Simon Middleton had words of comfort for Wales after his Red Roses handed out a 10-try thrashing to demolish any hopes of a Welsh Triple Crown.

Wales suffered a first defeat of their TikTok Women’s Six Nations campaign when they were beaten 58-5 at Kingsholm in Round Three of the championship.

Wales scored one try through Kelsey Jones in the second half, but for the most part it was dominant stuff from the No.1 team in the world in front of a record women’s tournament crowd of 14,689 at Kingsholm.

But Middleton insisted Wales will close the gap on his side if they are able to continue their progess brought about by an initial batch of full-time professional contracts.

“You can see it already. Wins are hard to come by in the Six Nations and they have had two great wins,” he said.

“I was really pleased with the second half. Some of the tries were fantastic and it was great to get the crowd out of their seat which was hugely important.” 💬

Hear what Simon Middleton made of #ENGvWAL 👇#RedRoses

“You can see the potential is absolutely massive, and it is testimony to them how far they have come in the short time that they have had their contracts.”

Hi opposite number, Ioan Cunningham said he was “super proud” of his players.

“We were really pleased with how we got stuck into England physically, we were up for the battle,” he said.

“We have got to critically look at ourselves on how we can get better and we can take great learnings from this game.”

First-half tries arrived via Lark Davies, Abbie Ward and the returning Jess Breach to put the Red Roses 19-0 ahead at the break.

Into the second period, Davies and Breach each added second scores to their name, while Sarah Bern, Alex Matthews, Shaunagh Brown, Emily Scarratt and Sarah Hunter all crossed for tries too.

Zoe Harrison added four conversions in the victory, with England now heading into a Six Nations fallow week before returning.

England’s most impressive performance of the Six Nations yet was delivered in front of their biggest home crowd for 12 years and highest outside of a World Cup.

Play was held up for several minutes early on after Abby Dow suffered a painful injury that resulted in her being carried from the pitch on a stretcher and she was subsequently taken to hospital.

It was England who responded better to the lengthy break as Davies finished a rolling maul and soon after Abbie Ward was over.

Wales’ scrum was being consistently overpowered but the hosts’ line-out was malfunctioning, while their momentum was also affected by an indisciplined phase.

Turning to the maul once more, however, their pack made 20 metres before the ball was spun to Breach, who was swept over by her footwork.

A second for Breach was sandwiched by two tries for the front row as Davies completed another maul before a rampaging Sarah Bern charged over from a line-out.

A can’t sleep post game reflections and a thank you for being kind tweet 🏴󠁧󠁢󠁷󠁬󠁳󠁿❤️ Diolch pic.twitter.com/3oPciUyArK

England’s dominance up front was complete with Bern and Poppy Cleall leading the charge and replacement Natalia John was sent to the sin-bin because of an accumulation of defensive penalties from the visitors.

Alex Matthews was the next to score, but in the 69th minute, the one-way traffic was finally pierced when Wales finally registered their first points through Jones’ try from short range.

Shaunagh Brown touched down just before John returned from the sin-bin and there were additional scores for Emily Scarratt and Sarah Hunter.

Wales captain Siwan Lillicrap said: “We have come far, maybe the score did not reflect that.

“This result does not define us, it is what helps us move forward. There were glimpses of some good stuff, I felt like we did rattle England from time to time.

“We have just got to work hard and stay united because the feeling in camp and the connection that we have created is brilliant, we cannot lose that now.”