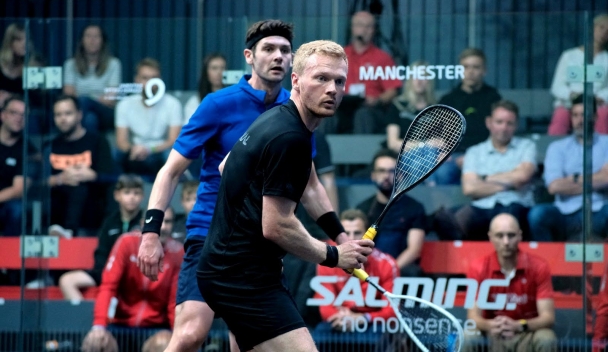 Joel Makin is determined to use his triumph at the British squash championships to kick on higher into the world’s top 10.

Makin became the first Welsh male player to win the British Nationals on Friday and he did it in style, without dropping a game in the tournament.

Makin had reached – and lost – the final in 2019, but this time there was no stopping him as he rediscovered the brilliant form that enabled him to beat former world number one Mohamed Elshorbagy a year ago.

“The last time I got through to the final it was a tough loss for me,” said Makin.

“It gave me a lot to go away with and work on, so I wanted to come into this week and put that right.

“It was before lockdown and COVID, so I had a lot of time to think about it and turn things around. I really wanted to come here, play well and put in a solid and professional performance and 3-0 – I was happy with that for sure.

“I like to out position people, that’s the part of the sport I like. Taking a lot of pace through the middle, volleying and taking early and working people – that’s what I enjoy about it and that’s how I like to play. I got that right this week.

“You could look at last year as being the first final that I’d made, but I wasn’t looking at it like that, I wasn’t happy with it. James [Willstrop] put together a brilliant performance and you have to take that on the chin, he played quality and he exposed some of my qualities but it gave me time to go away and work on it and that’s what you need sometimes.

“It’s exciting having squash back in the UK, especially with a proper crowd and hopefully it grows over the next few weeks.

“We enjoy it as professional players, it’s been a tough year for everyone and we’ve spent a lot of time in Egypt but we enjoy playing the UK events, so I’m looking forward to it and I should be sharp for next week.”

Makin had come through the tournament without dropping a game, while Waller had had to battle his way through two brutal five-gamers to make this stage, against Patrick Rooney and George Parker.

That freshness helped Makin in his bid for the title, and once he had claimed the first game 11-7, it was plain sailing for the World No.10, as he restricted Waller to just three points over the next two games, to complete a dominant and history-making performance.

Waller said: “I’m quite proud with how I battled through this week. The last two matches were really long and really hard, finished late last night, so I’m pretty proud to come through those first three matches but today was probably one match too far and Joel was too strong.

“Otherwise, happy to be back playing and feeling stronger and just going to try and kick on from here in the next few weeks. Try to work forward from here.”