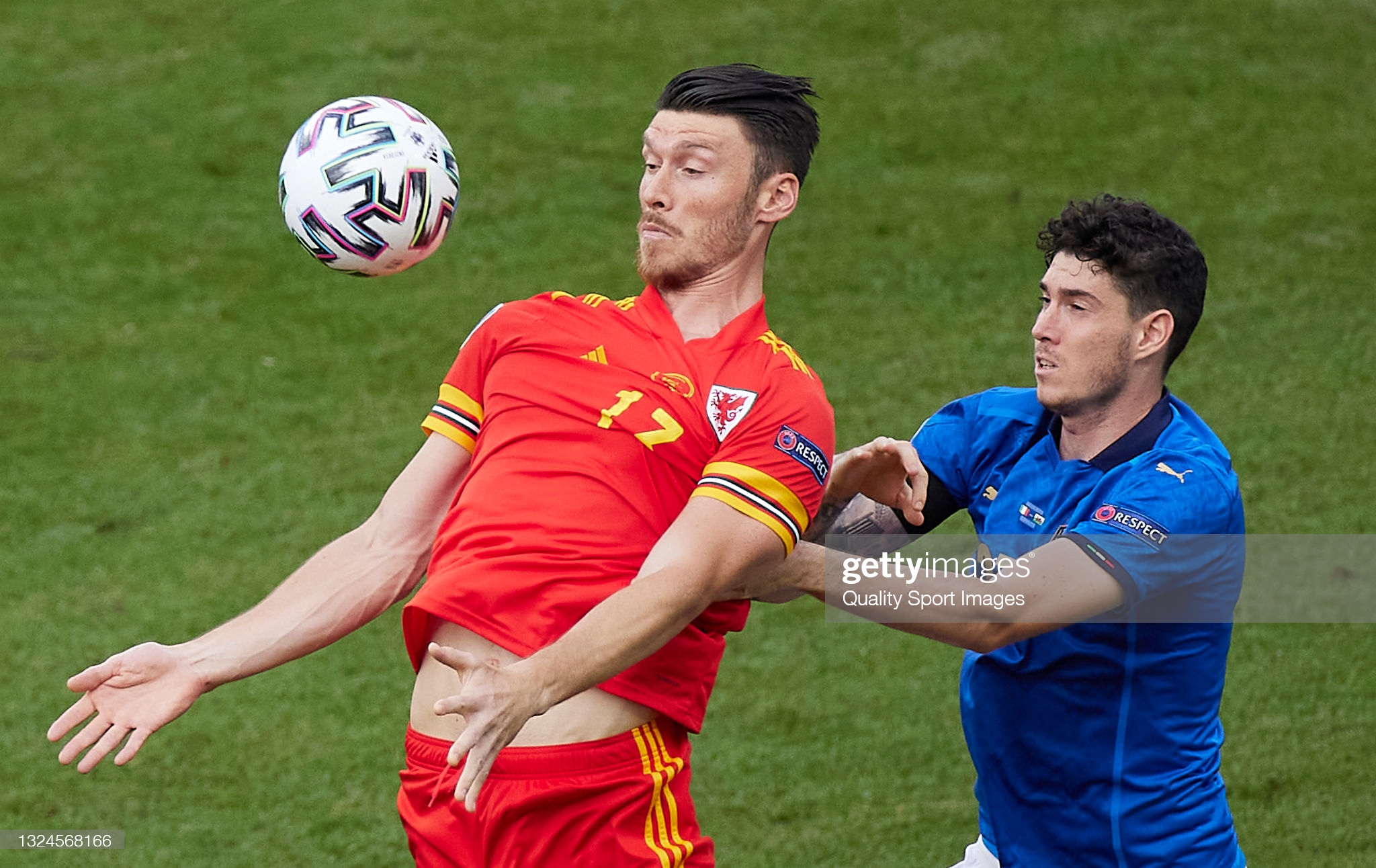 Wales striker Kieffer Moore believes he is an easy target for referees at Euro 2020 because of his size.

The 6ft 5in Cardiff City striker was on the bench for Wales’ final group game in Rome as he was on a booking, and manager Robert Page was aware another yellow card would rule Moore out of their last-16 tie against Denmark on Saturday.

Moore was eventually sent on with Welsh backs to the wall and an attacking outlet needed following Ethan Ampadu’s 55th-minute dismissal, but Page told the forward “to jump with no arms” against Italy.

“When referees look at my stature and my height, I’ve kind of made it to be an easy target,” Moore told Sky Sports News.

“If opponents go down, realistically I haven’t probably touched them, but they’ve thrown themselves to the floor and it looks like I have.

“It’s also about me taking myself out of those situations and look like I’m not doing that really.”

Moore has scored six goals in 20 games since making his Wales debut in September 2019.

The 28-year-old’s arrival on the international scene helped Wales turn around their Euro 2020 qualifying campaign and reach this summer’s delayed cross-continent tournament.

Moore also scored in the opening 1-1 draw against Switzerland a match in which he was booked for catching Fabian Schar in the face with a stray elbow.

Skipper Gareth Bale implored Moore to avoid a booking when he came on for the final half-hour at the Stadio Olimpico.

Asked about modifying his jump, Moore said: “I did do that, but jumping without the arms is very hard.

“In a way, I had to get through to not get yellow carded. It’s all about adapting, if I can not get another yellow card I’ll be happy to keep trying to do that.”

The Wales squad left their Rome base for Amsterdam on Thursday and a third country visited at Euro 2020.

If Wales do beat Denmark at the Johan Cruyff Arena, they will return to Baku – where they played their opening two matches – for a quarter-final against Holland or the Czech Republic.

Wales fans are not permitted to travel to Amsterdam due to travel restrictions, and Moore said: “You can feel we’ve been hard done by.

“But for us obviously finding out the semi-final and final is at Wembley, that’s more of an incentive than ever for us to see if we can reach those heights and get Wales fans back in there.

“The whole experience has been amazing. It’s just a whirlwind of a tournament and to get through the way we did was amazing.

“I’m loving every minute of it and I want us to keep going. I don’t want to go home yet.”

Wales supporters were severely outnumbered in Baku for their second Group A tie against Turkey and having triumphed in that game, manager Robert Page says his team will try and use a stadium of Denmark fans to their advantage.

“It’s all a little bit political isn’t it but at the end of the day it is what it is we can’t influence it, we’ve got to control what we can and all we have to worry about is the game,” said Page.

“Yeah they will have supporters but Turkey had 30,000 fans and we beat them so we’ll use it to our benefit and we can’t wait.”

Reflecting on Denmark’s progression to the knockout stages, Chelsea centre-back Andreas Christensen, who scored with a stunning strike from 25 yards out against Russia, says the whole country has united in their support for Christian Eriksen and the national team after the midfielder was hospitalised following his collapse on the pitch in their game against Finland.

He said: “We have been through a terrible thing. We’ve done it together. We are at home at the Euros and it means a lot to us. To get that start, it was very tough, not just for us as a team but for the whole country and we are missing our best player.

Harry Kane has played 7 games (485 minutes) at the euros and is yet to score.

It took Kieffer Moore 1 game (74 minutes) to get his first goal at the euros. pic.twitter.com/bMtyrCOiaf

“But at the same time because of this, we have come even closer than we were and we have played with a lot of emotions. I think that the energy level, we have hit another level. We are looking forward to every game, and we are trying to show our emotions and how much it means to us.”

Looking ahead to their game with Wales, defender Daniel Wass has warned his Denmark team-mates over the threat posed by Bale and insists Hjulmand’s team will need to ensure he has a quiet evening on Saturday.

Wass said: “He is a fantastic football player. He showed that in Spain and as well in England. So he is going to be tough to stop. Wales have a good team and I think that the X-Factor is Bale. So we’re going to have our eye on him.

“Of course it is going to be different not to have our fans with us from Parken. But again, we knew that was going to happen if we got through from the group. But, we’re going to go to Amsterdam with the same intensity as we have played the last two games.”