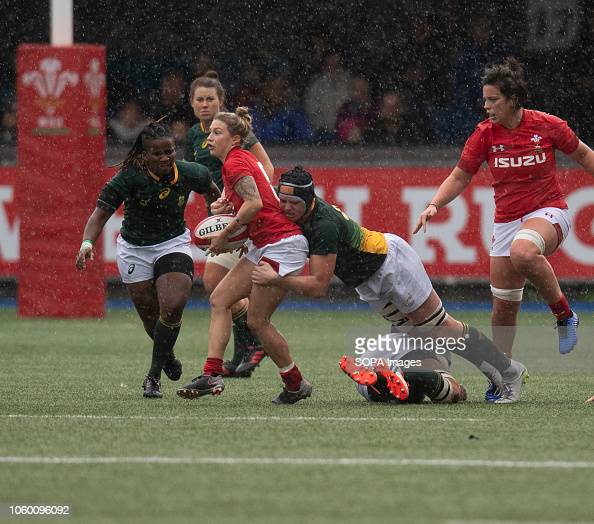 Wales Women’s Keira Bevan is hoping to put her skills to the test against Canada when the two sides meet at Cardiff Arms Park on Sunday.

After being out for a year coming back from injury, the scrum-half is looking forward to being back in the squad.

“All being well, this will be my fourth Test against Canada which is really exciting and after our positive autumn campaign, we are really keen to keep improving and put in a performance to be proud of in our final match of 2021,” she said.

“Canada are one of the top sides in the world. We have made good progress so far but we have learned before that we can’t be complacent against them or it will be a very long afternoon.”

Head coach Ioan Cunningham has made three changes to his side to take on Canada on Sunday (5pm) following the 29-19 win over South Africa last Saturday.

Bevan starts at scrum-half while Caryl Thomas and Lisa Neumann return at loosehead and on the right-wing after missing the South Africa match through injury. Kat Evans has also recovered and will start on the bench.

Keira Bevan: 👁‍🗨”We have more to give”
#WalesWomen hope to step up another gear against third in the world Canada 🇨🇦 on Sunday (5pm)

Wales faced Canada twice in the 2017 Rugby World Cup and then in November 2018, with Canada coming out on top of all three matches.

“The first time we played them in the 2017 World Cup, it was a competitive game for around 70 minutes but Canada scored two late tries to take them 15-0 clear in the end,” she added.

“Then we played them a week or so later in Belfast in a game that they ran away with (52-0). We learned a lot of lessons from that. We knew what we were up against but they took their game to another level, while we stood still. We can’t do that this weekend, that’s why we have to up our game.

“In autumn 2018, we had another enjoyable Test match, similar to my first game against them. We scored some good tries that time and were competitive but Canada again showed their class in the last 20 minutes to win 38-21.

“We know we have made strides but our execution has to be spot on. We have to capitalise on our scoring opportunities or we will be punished. We have to stay focused and keep the intensity up right until the final whistle. It’s just exciting to see how we go against a very good Canadian side.”

“I love playing for Wales. Singing the anthem never fails to give me goosebumps. It is always hard to watch from the sidelines so I really appreciate being part of the team again. This is definitely the level I want to be playing at. When lockdown happened in March 2020, I was involved in the wider GB Sevens squad and felt I was in good form. Then I missed most of the 2020/21 season through two injuries. I feel like I’m getting back to where I want to be now, I’ve been training with GB Sevens again too which has benefitted me but I know I have more to give.

“We’re enjoying our rugby at the moment and we all know exactly what we need to do within the squad. We want to repay the support we’ve had with a good performance this weekend.”

Can’t wait for this one! Wales head into their final clash against world number 3️⃣ Canada on the back of a great win over South Africa! Join us at @ArmsParkCardiff on Sunday!

Sunday’s match is the last of the women’s Autumn Nation Series.

Cunningham said, “Our primary focus is to keep improving. We are pleased with how we went against Japan and South Africa. However, we left a lot of scoring opportunities in the park, that is something we can’t do this weekend. When we create chances to score, we must take them.

“Canada are ranked third in the world for good reason. They have Olympic athletes in the side and World Series sevens players. They will challenge and test us and play an ‘all-court’ game – they are strong upfront and put a lot of width on the ball too. We will have to apply ourselves from the off right through to the final whistle.

“We are pleased with our progression so far and we are determined to finish the campaign on a high. There is healthy competition within the squad and we have rewarded good performances but it was also important for us to grow confidence and cohesion at this point in time.

“The good work is down to everyone in the squad even though some haven’t featured in the series. The standard of training has been high and that’s down to the whole group. We want to keep building and keep the momentum going on Sunday and beyond.”