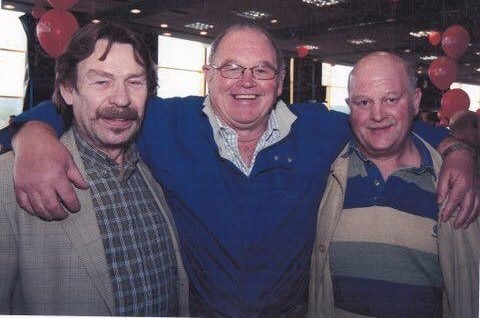 Liverpool-born, Murphy was WRL heritage #294, winning five caps from 1975-79. This included three appearances in the 1975 Rugby League World Cup, one of which was the famous 25-24 win over New Zealand in Swansea – the last time that Wales beat the Kiwis at full international level in either rugby code.

Murphy had a distinguished playing career with clubs in England, Australia and France. A fast prop forward, it was once reported that he could sprint 100 yards in 11 seconds.

Starting his career in rugby union with Waterloo, he turned professional with Leigh in 1963. He then moved to Barrow in 1969 and St Helens in 1972, who he helped with the league championship in the 1974-75 season. During that time he represented Lancashire twice.

Switching to Bradford Northern for two seasons from 1975, he then moved abroad and spent much of the 1977 Australian season with New South Wales side Wagga Wagga. On his return to Europe, he spent time in France with Tonneins XIII and St Jacques XIII.

He then turned to club management and was part of a three-man consortium who rescued Huddersfield in 1988 when the club was heading for liquidation. He persuaded Alex Murphy to become coach, which led to a revival in the club’s fortunes.

His contribution to the club now known as Huddersfield Giants was recognised when he was made a life member, and he attended last Thursday’s Super League match against his old club St Helens.

Not content with just becoming a chairman of the rugby league club, Murphy was eventually given the same position at Huddersfield rugby union, also pulling on his boots again for the 15-a-side club’s Extra C side until the age of 60.

Murphy, who lost his wife Rosemary last June, had a varied career away from rugby, starting out as a teacher, he once stood as a parliamentary candidate in Knowsley, and like a few other former Wales internationals, later turned to television acting.

WRL chairman Brian Juliff said: “I’m very sad to hear that Mick Murphy, another from the Wales Rugby League family has passed away.

“Mick was a strong, uncompromising forward who played with flair and enthusiasm. He was always a character on and off the field and a pleasure to spend time with.

“Everyone at Wales Rugby League send their condolences to Mick’s family during this sad time.”

Jim Mills, Mick’s teammate from the 1975 World Cup and good friend, said: “I was so sorry to hear about Mick. He was a great player and a lovely man and he wore the Welsh jersey with pride.

“My deepest sympathy to his family and friends.”

One thought on “Ex-Wales RL International Mick Murphy Has Died”