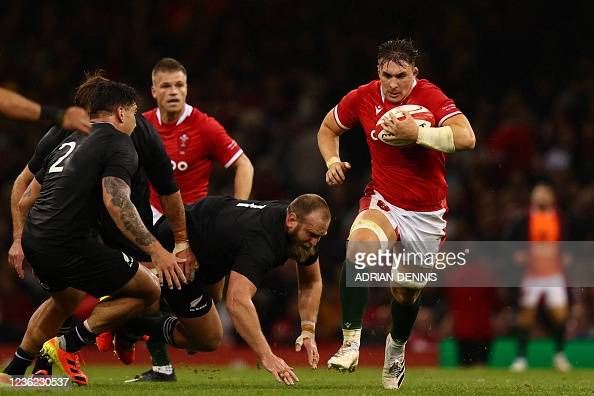 Taine Basham believes Wales can muscle up to stronger effect when they face world champions, South Africa, this weekend.

The Dragons flanker – who made a hugely impressive full debut in the 54-16 defeat to New Zealand – reckons his side can rise to the physical challenge of the Springboks and bring some more beef to the hosts’ menu.

Reflecting on his first start in a Wales shirt and the ferocious challenge the Springboks will bring, Basham said: “I think we could go up another level in physicality. Discipline as well, I think. There were a few penalties there that we didn’t need to give.

“I think in the last 20, discipline let us down, but I feel like the scoreboard didn’t reflect our performance.”

The result may not have gone our way, but hearing this back at a full house is was pretty special.

We’re back next week for our second @AutumnNations fixture against the @Springboks with limited tickets still remaining.

It may have been Basham’s introduction to 80 minutes of Test rugby after three caps off the bench, but he looked very much at home in an all-Dragons back row that included Ross Moriarty and Aaron Wainwright and the 21-year-old was singled out for special praise by Wales head coach Wayne Pivac.

He added: “I just play my game. Nothing changes for me, I don’t think. I go into the game with the same attitude. Even if I wasn’t playing an international, I just go into every game giving it my all.

“Obviously, the seven jersey in Wales is always competitive. For me, I just play my game, and I play with quality players.

“We just need to bring it next week, go up another level. I think we have got another gear in us to go up again, so I am looking forward to it.

“It’s obviously disappointing conceding that many points. We put a good shift in for 60-plus minutes, and discipline in the last 20 didn’t go our way, and I think we should now really look forward to next week and really bringing it to South Africa.”

South Africa will arrive in Cardiff having beaten New Zealand in the final match of the Rugby Championship, 31-29.

But prior to that game, they lost three on the bounce – against Australia (twice) and the All Blacks.

Basham is hoping that playing alongside his Dragons teammates has sharpened his impact on the international game as well as learning from watching other openside specialists such as the Ospreys, Wales and British and Irish Lions star Justin Tipuric.

“Tipuric is obviously a great rugby player and an intelligent player to be around, so I’ve learnt off him, obviously Ross and Aaron at the Dragons as well.

Beauden Barrett scores his second interception try of the game in the closing seconds at @principalitysta rounding off a solid performance on his 100th cap. Conversion unsuccessful. 80 mins.#WALvNZL #AutumnNationsSeries pic.twitter.com/xGJdge3hGc

Basham came through unscathed but Moriarty departed early on with a shoulder injury, with the same fate ending the game early for Wales skipper Alun Wyn Jones.

Jonathan Davies stepped up to take over the captaincy and said: “Credit to New Zealand – they showed why they are one of the best sides in the world. They were ruthless.

“We were able to stay in it in the first half and our physicality was good. We fronted up to them, but the important thing is we keep building for next week.

“We know the more time we spend together the better we get and we are looking forward to playing in front of this amazing Welsh crowd again.

“New Zealand don’t let you get away with any mistakes. We have to make sure we take the learnings from this and keep building.”