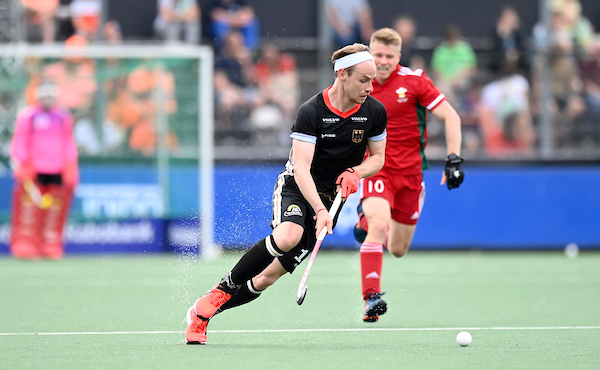 Wales conceded three late goals as their return to men’s EuroHockey action proved a tough assignment against a ruthless Germany.

Wales – who put themselves on the map in this tournament two years ago with a sixth place finish – were given a torrid time against a hugely experienced German side that found a rich vein of scoring form.

A Gareth Furlong goal gave Wales some hope when they were 3-0 down, but Germany’s organised defence was not breached again.

The heavy scoreline will be a blow to Newcome, who took over from Zak Jones last August, but Wales have a chance to make amends when they face France on Saturday evening.

The Germans’ goals mostly came in waves, netting three times between the 12th and 18th minute to build a 3-0 lead from which they never looked back. And then they finished with a flurry in the closing minutes to inflate their margin of victory.

Constantin Staib got them up and running with a sharp rebound, mopping up after a messy penalty corner was half stopped by James Fortnam.

Niklas Bosserhoff got the next with a rocket of a shot, picking up the ball on the right flank from Lukas Windfeder’s pin-point aerial pass.

Paul Philipp extended the lead to three in quick succession as he latched onto some hesitant defending to nick the ball and pump a shot through the goalkeeper.

Furlong showed his corner prowess to get one back in the 21st minute but Windfeder found a similar route to goal for a 4-1 half-time lead.

We have the opening goal of the EuroHockey Championships. Staib knocks in the rebound from close range as the ball comes back off the post #EHC2021

The Germans kept coming in the second half but the damage was limited to just a Niklas Wellen finish from another initial corner that went awry but was worked back into the danger zone by Timur Oruz.

And they finished with a flourish with three goals in the last two minutes; Christopher Rühr’s brilliant run from halfway had a finish to match for 6-1; Staib got another from mid-circle and Timm Herzbruch completed the scoring from the penalty spot.

Germany captain Florian Fuchs said: “To play a big tournament, especially after two or thee years, even being able to play in front of fans, it is amazing.

“The team performed particularly well. It was not just one player; the whole team was outstanding today. We are really happy and this is a good start to move forward from.”