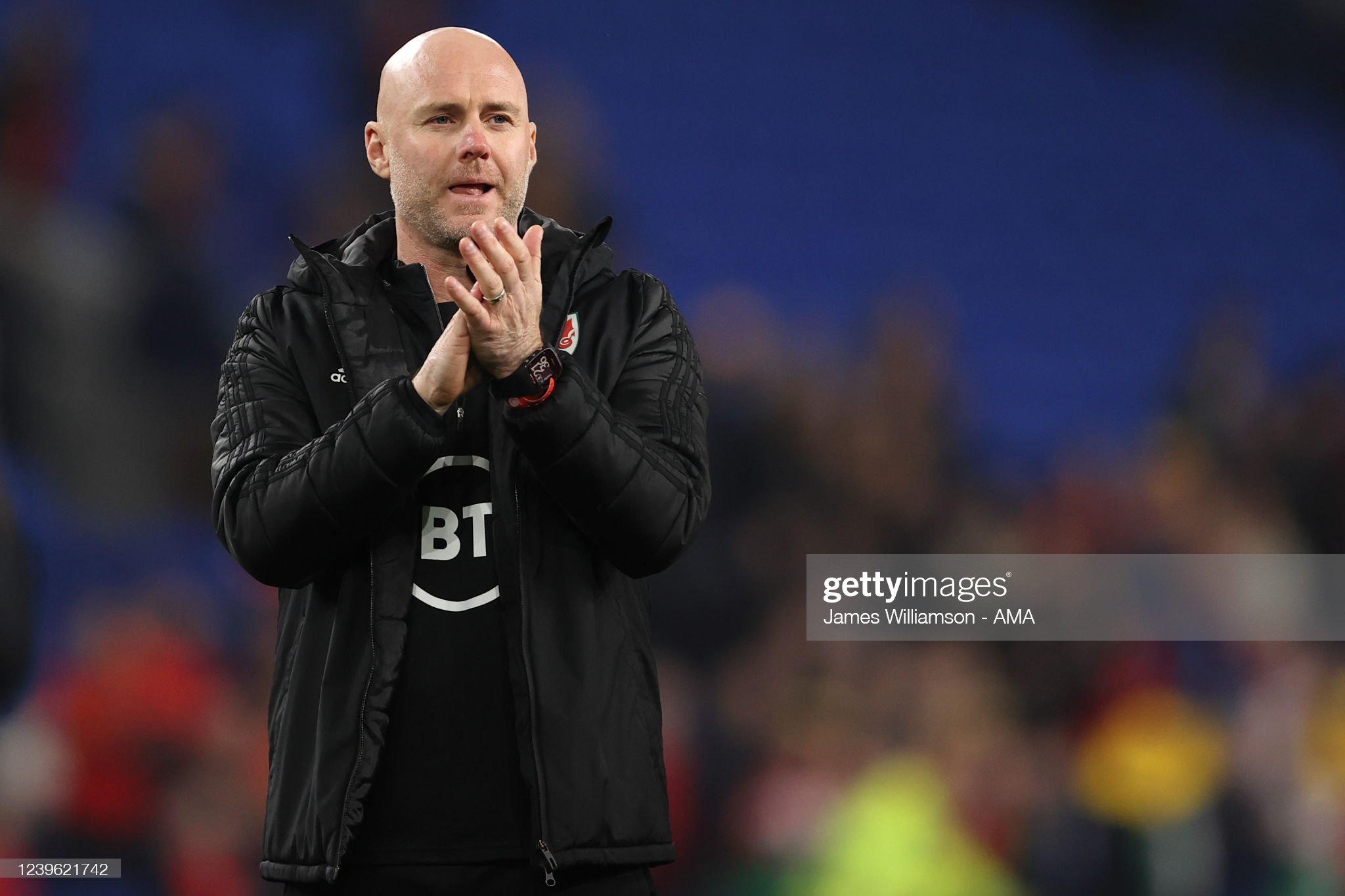 By Jared Evitts
Rob Page has finally got the chance to run the rule over potential World Cup play-off final rivals Ukraine this summer thanks to a decision to allow the top footballers in the under-siege nation to go on a tour of some of Europe’s top clubs.

Wales are scheduled to play either Scotland or Ukraine in the Qatar shoot-out in Cardiff in June with the winners earning a ticket to the World Cup finals.

The war in Ukraine had put in doubt the ability of their national side to fulfil fixtures. No males aged between 18-60 are currently allowed to leave Ukraine and none of the Ukraine-based players have been able to play competitive fixtures. This came after their domestic season was suspended on 25 February, one day after the Russian invasion began, when President Volodymyr Zelenskyy announced martial law.

However, the Ukrainian government’s minister for sport, Vadym Gutzeit, is now set to sign-off special permits that will allow teams from football and other sports to leave the country to play and train abroad.

At the moment, there is no set date for the game between Scotland and Ukraine. That means Page and his Welsh team are having to play a waiting game to find out when they will be able to play the biggest World Cup fixture in Welsh footballing history since 1958.

With four UEFA Nations League fixtures already scheduled for June for all three contestants for the final ticket to Qatar, it is going to be a busy month. In permitting Ukraine’s leading domestic players to leave their war-torn country to train and play overseas it means they should be able to compete on something like an equal footing with the Scots and then, potentially, with Wales.

The first phase of getting many of Ukraine’s top players back into action came in Warsaw on Tuesday night (12 April) when Dynamo Kjiv beat Legia Warsaw 3-1 in a ‘Match for Peace’.

“Thanks to the support of the leadership of our country, Dynamo will take part in an international charitable mission – a series of friendly games with top clubs in Europe,” explained the Dynamo club website.

“All friendly matches of Dynamo will be shown on Ukrainian and European TV channels. The project will also involve stars of Ukrainian arts who will support the charitable mission of our club.”

For their part, Legia Warsaw how the game will be a joint appeal for peace from the two nations. Proceeds from ticket sales, a bucket collection and special auctions will go towards helping the millions of Ukrainian refugees.

“Our thoughts on Tuesday night will be especially with those whose reality has collapsed due to war, forcing them to leave their family homes,” said an official spokesman from Legia.

Tuesday night’s fixture will be the first in a three-month tour during which time Dynamo will play against a number of Europe’s top teams in matches played under the slogan ‘Match for Peace! Stop the War!’

The aim is to let the international community know more about the horrors of the war in Ukraine and to raise funds to support for those so adversely affected by the Russian invasion.

One Ukrainian team has already been back in action, with the Dynamo Kyiv U19 side faced Sporting Lisbon in the Uefa Youth League in Romania on Thursday, 7 April. They lost 2-1 and their players walked out with Ukrainian flags, and a minute’s silence was held prior to the game.

“It wasn’t easy to assemble the team, because at the beginning of the war the players were not only in Kyiv, but also in Poltava, Cherkasy and other regions of Ukraine,” said Dynamo’s deputy director general, Serhiy Mokhnyk, speaking before the game.

“We are doing our best to ensure that our young footballers justify the trust we’ve placed in them and represent Ukraine with dignity. They are grateful for the chance to fight and defend the honour of Ukraine on their battlefield – the football pitch.

“These young Dynamo players are hoping to give Ukraine at least a small moment of joy and sporting pride in the dark times of war.”

On Instagram, he said: “We collect inquiries from all over Ukraine and pass them on to proven people in Spain and Italy – now our main partners. Logistics are organized to transport things to Ukraine, which is not easy now, but nothing is impossible for Ukrainians,” he said.

They have helped to source 500 first aid kits, 50 bulletproof vests and five thermal imagers, which have been distributed to Odessa, Marinka and Mykolayiv.

The defender has joined forces with Heorhiy Bushchan in the scheme since the Ukrainian Premier League was cancelled.

Sobol is a Regular for the Club Brugge team that has finished runners-up to Union Saint-Gilloise in the First Division A League in Belgium, and lost in the semi-finals of the Croky Cup.

Whilst playing for Atalanta against Olympiacos on 24 February, he scored his side’s second goal and revealed an anti-war message. It read ‘no war in Ukraine’. He has also been very vocal on social media since the start of the war, calling for attention and support for Ukraine.

Midfielder – Taras Stepanenko (Shakhtar Donetsk – 32)
With the Ukrainian Premier League suspended, he also hasn’t played since February. During the war, Stepnenko has been an advocate for an organisation called Shift 360, an organisation who are providing money and aid for the people of Ukraine.

Midfielder – Oleksandr Zinchenko (Manchester City – 25)
Midfielder Zinchenko is still bidding for Premier League, Champions League and FA Cup glory with Man City. He issued a plea to save the children of Ukraine and highlighted the suffering of young people on social media.  In an interview with Gary Lineker he stated: “If not for my daughter I’d be there fighting.”

He was recently made captain against Peterborough United in the FA Cup as the club showed solidarity with him.

Attacker – Andriy Yarmolenko (West Ham United, captain – 32)
Although born in Russia (St Petersburg), he plays for Ukraine and is their captain. Yarmolenko cried after scoring a goal for West Ham against Aston Villa and says playing football in the Premier League has “stopped him going crazy at the thought of his family being shelled”. He has since managed to get his family out of Ukraine and into London to be with him.

Attacker – Roman Yaremchuk (Benfica – 26)
Forward Yaremchuck was on the bench for Benfica’s Champions League quarter-final first leg defeat to Liverpool this week. He was given the captain’s armband by Jan Vertonghen when he came on for the final 30-minutes of their game against Ajax in the Champions League and received a standing ovation by the fans that moved him to tears. “My people fight in Ukraine and I need to fight here,” he said.

Attacker – Viktor Tsygankov (Dynamo Kiev – 24)
Amongst other players, is taking part in a ‘match for peace’ for Dynamo Kiev, on April 12th against Legia Warszawa.

Manager – Oleksandr Petrakov (64)
Manager Petrakov has stayed put in Kyiv, rather than fleeing when the invasion began.

“I thought, if they come to Kyiv I will pick up a weapon and defend my city. I’m 64 but I felt it was normal to do this. I think I could take two or three enemies out.”

Oleksandr Zinchenko thanks those who have supported Ukraine and calls for more to help stop the war in his homeland. pic.twitter.com/uSVz2y1rPa

The Premier League stars Zinchenko and Yarmolenko were both caught up in a social media spat with the captain of the Russian national side, Artem Dzyuba, for criticising him for keeping silent over the invasion.

Dzyuba took aim at Yarmolenko and Everton’s Vitaliy Mykolenko by saying: “You sit on you’re a*** in English mansions saying nasty things”.

In a lengthy post on Instagram, Dzyuba claimed he is against war, but went on to accuse people of having double standards in their “anger” and “insults” towards Russians.

“Until recently, I did not want to speak on the topic of events in Ukraine. I didn’t want to, not because I’m afraid, but because I’m not an expert in politics. I never got into it and didn’t intend to (unlike a large number of political scientists and virologists who have recently appeared on the Internet).

“But like everyone else, I have my own opinion. Since I am being drawn to this topic from all sides, I will express it. I am against any war. War is scary. But I am also against human aggression and hatred, which every day acquires some transcendent proportions.

“I am against discrimination based on nationality. I’m not ashamed that I’m Russian. I am proud to be Russian. And I don’t understand why athletes should suffer now.

“I am against double standards. Why one can do everything, but all the dogs are hanged on us. Why is everyone always shouting about sports outside of politics, but at the first opportunity, when it comes to Russia, this principle is completely forgotten?”