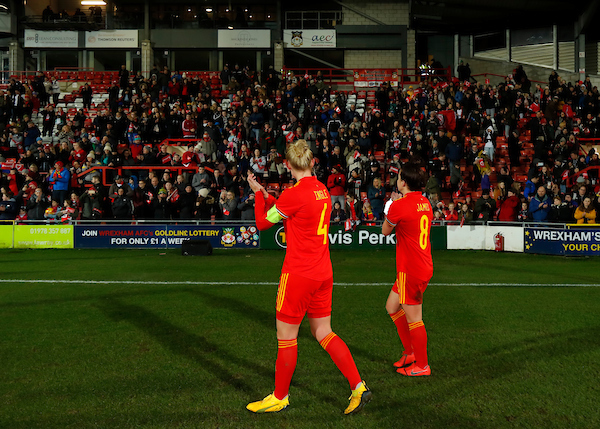 Sophie Ingle has admitted not so long ago she would never have believed Wales could stand on the threshold of a record crowd by means of a fixture against Estonia.

But that is exactly where Wales are poised to be for Tuesday night’s qualifier for the Women’s World Cup which is taking place at the Cardiff City Stadium.

The Football Association of Wales are confident that the current highest attendance for a Wales women’s international match – the 5,052 who saw Wales play England at Rodney Parade in 2018 – will be eclipsed.

Asked how she would have felt three years ago if someone had suggested the record would be broken for a tie against Estonia, Wales captain Ingle said: “I would never have believed it.

“It’s an incredible position to be in and reflects both the success of the team and the progress we have made as well as the massive strides made by the women’s game in general.

“Theere is so much more interest now and that’s being reflected in the attendances.

“They love Wales as much as we do, and we love representing our country. Just having those fans in the crowd cheering us on from minute one, with the anthem with us, that erupts the stadium. It’s phenomenal.

“Knowing it’s not just our family and friends that come anymore, it’s the wider public and they actually enjoy coming to watch women’s football and Welsh football, it’s really good.

“I’ve got at least 20 family coming, a lot of my family are from Barry or Cardiff. I can’t wait to get the crowd in. Hopefully we break the record. I think that’ll be an amazing achievement and what we deserve, really, as a team.”

When Wales hosted England three years ago, qualification for the World Cup was still a possibility for the team managed then by Jayne Ludlow.

Defeat for Wales that night ended the dream, but a new opportunity has been created in this campaign thanks to a hugely encouraging start to the era of new manager Gemma Grainger.

Wales are unbeaten in Group I, with back-to-back victories over Estonia away from home and Kazakhstan at Llanelli, followed by a battling 1-1 draw last Friday in Slovenia.

France have accrued a maximum nine points from their three games and already appear out of sight when it comes to goal difference with a total of 22, compared to Wales’ seven.

But Grainger has rejected the suggestion that Wales are already playing for a runners-up spot and qualification through the play-offs.

“The goal difference requirement suggests we cannot beat France and I think we can beat France,” she insisted.

“We need to keep picking up the wins and, yes, at this moment I would take a gritty 1-0 victory over Estonia if that was on offer.”

Grainger is also convinced that the hoped for record crowd proves that her team – currently ranked 34th in the world – are making progress and attracting a new audience, some of whom watch men’s football but plenty who don’t.

“We do have a collective identity here at the FAW in terms of the men’s and women’s and we’re looking to work closer together, but the two games are completely different.

“It’s about really celebrating the things that make us the women’s game: our fan engagement, the way that we really do connect people, and the time the women’s game takes to do that.

“I think the qualities that the game has does make it more inclusive. Anyone can come and enjoy the game.

🗣️ “One of the sayings we have is ‘leave no stone unturned'”

“Maybe a while ago, people were trying to compare it to the men’s game. I think we’ve started to move away from that now. The women’s game has got some incredible qualities.

“One of them that I’m particularly passionate about is people being able to be who they are and be themselves.

“It’s summarised by the environment: the family feel. One of the things that we have here is family, and I think that probably defines what it will be like at the stadium.

“There’s a real vibe around ‘you can come here and be part of our family’. Because of the connection that we have with the fans and how close we are.

“That’s the beauty of the environment. Anyone is welcome. It’s a very inclusive environment. Even if it’s your first time at a women’s game, you are very welcome.”

Wales will be without Kayleigh Green, who is suspended after she was sent off for receiving two yellow cards in Slovenia.

The Brighton striker has scored three goals in the opening three games of this qualifying campaign.

Tickets start from £4 and are available to purchase online at faw.cymru/tickets.