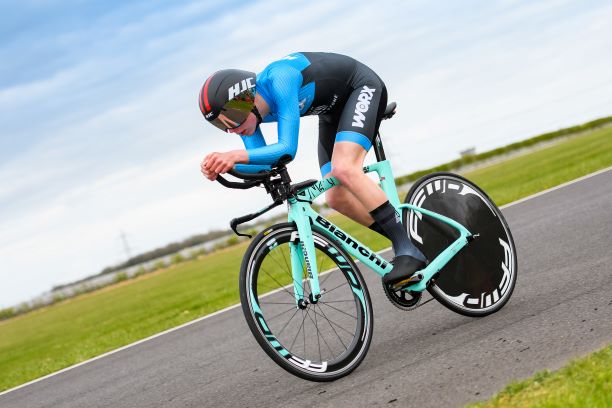 Finlay Tarling is off to the European Youth Olympic Festival.

A Magnificent Seven Welsh youngsters have been selected in the Team GB squad to take part in the 2022 European Youth Olympic Festival in Banská Bystrica, Slovakia.

Team GB are taking a squad of 40 athletes to compete in the competition between 24-30 July. They will be part of an event that will involve 3,500 athletes and officials from 48 European nations who will compete in 10 Olympic sports.

The athletes are all aged 13-18 at the event and will take part in five sports – badminton, cycling, gymnastics, judo, and swimming. Athletics, basketball, handball, tennis, and volleyball complete the sporting programme.

Ffosyffin cyclist Finlay Tarling made a strong start to the 2022 season winning his first five races, including a win in Belgium.

He has joined elder brother, Joshua, in the Belgian FlandersColor cycling team for this year and became the Welsh U16 cyclocross champion at Pembrey.

He is joined in the cycling team by Sam Fisher, who recently finished fifth in the Scottish Cycling Youth Tour where he won a stage. He started cycling at Maindy Flyers, which is where Geraint Thomas launched his career.

NEWS | Holly Devall has been selected to represent Team GB at European Youth Olympic Festival (EYOF) in Banská Bystrica, Slovakia from 24 to 30 July.

Congratulations Holly on this fantastic achievement!

There are two Welsh gymnasts in the squad, 15-year-olds Ruby Evans and Evie Flage-Donovan.

“I’m super excited to have been selected to represent my country. Although I’m nervous, I’m very grateful to be given this opportunity and to experience it with my training partner, Evie,” said Welsh gymnast Evans.

“I recently broke my finger, so my preparation has been very different to normal – I just want to compete at my best, to experience staying in a village, and to meet new people from different countries that I could possibly compete against in a couple of years’ time as a senior gymnast.

“I want to keep progressing and continue competing for my country as it is a great honour. One day I would love to represent Wales at the Commonwealth Games and Team GB at the Olympic Games, so being selected for the EYOF has really inspired me to keep working hard in the gym.”

Swimmer Mabli Collyer makes up the seven strong Welsh contingent. A former triathlete, she now swims out of the Swansea Aquatics club and will compete in the breaststroke.

This will be the 16th edition of the EYOF and at the last summer event in Baku, Azerbaijan in 2019, Team GB claimed second place in the medal table with a total of 25 medals, including 11 golds.