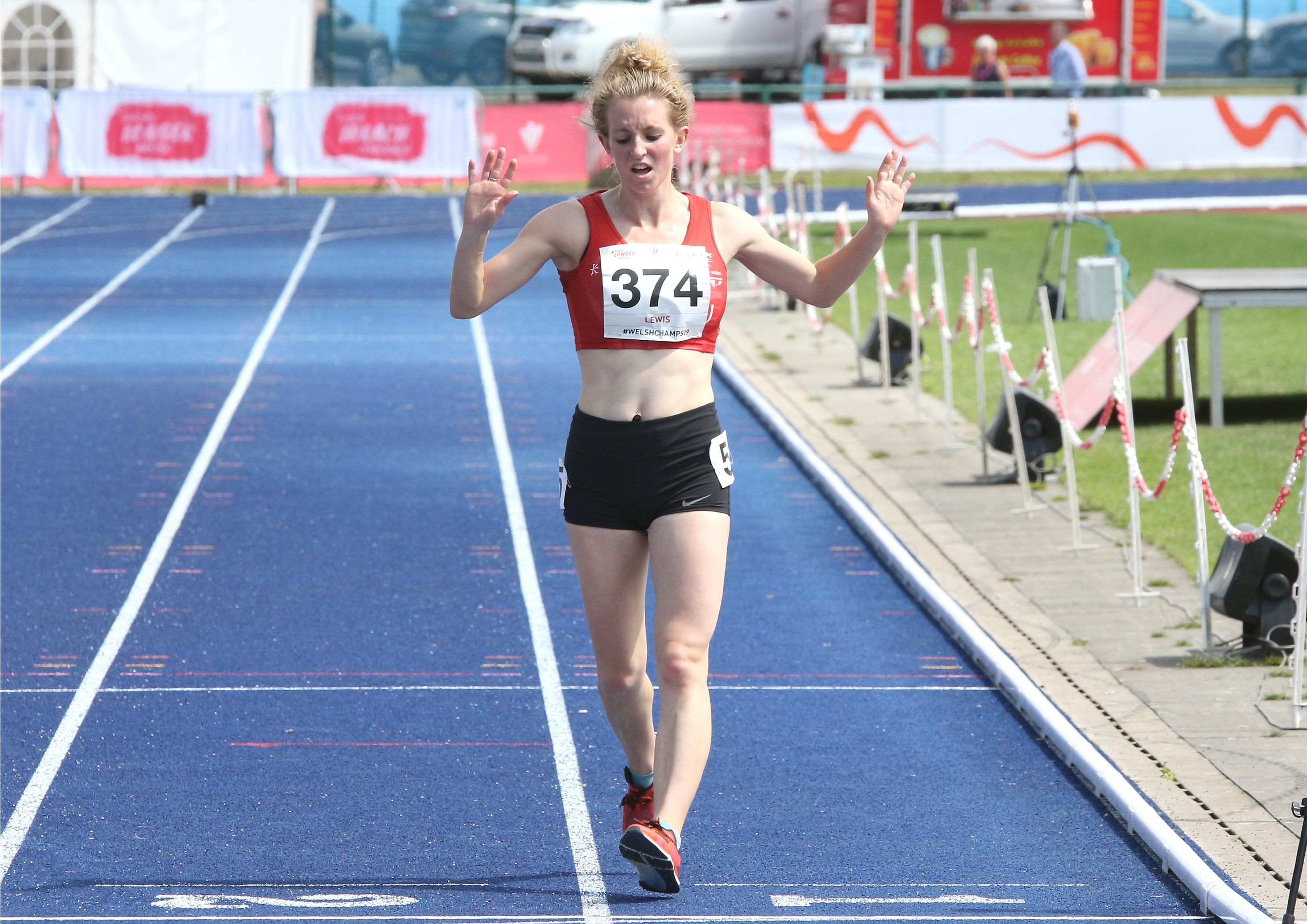 Heather Lewis is hoping to be in for a busy summer.

Like so many international athletes, Lewis leads a hectic double life.

On one hand she is a race-walker with Olympic ambitions. On the other, she helps run her family’s dairy farm and tourism business in Pembrokeshire.

The Welsh race walking champion’s twin ambitions for the coming months are a place on the Great Britain plane to Tokyo and a visitor-filled holiday season at the Clerkenhill Adventure Farm and Frizbee Golf course near Haverfordwest.

The next few weeks could decide whether Lewis’s summer dreams will come true.

On Friday, March 26, the Pembrokeshire Harrier will take part in the Olympic 20K Race Walking Trials on an enclosed loop course in London.

The following Friday, she will be hoping the Welsh Government will announce more news regarding the re-opening of tourism attractions in time for the summer season.

As a result her time is split between training and preparing the family business to welcome back the paying public.

“That’s what I’m doing this afternoon”, said Heather when she took my call. “I’m getting some painting and things like that done. We’re all getting everything ready.

“As soon as we get the go-ahead to open we will be prepared for it. So fingers crossed, something gets opened around Easter, but if not, we’re ready for whenever we’re allowed.”

Just a couple of days before we talk, Heather was making very different preparations on the opposite side of Wales in Newport.

The former British 5k champion was competing in Welsh Athletics’ Elite Only 10K Winter Walks event, arranged to help Lewis and her great Welsh rival and friend Bethan Davies prepare for the Olympic trials at Kew Gardens later this month.

Lewis and Davies have excelled across the domestic women’s race-walking scene in recent years, taking it in turns to claim Welsh and British titles.

They both represented Wales at the Gold Coast Commonwealth Games in 2018 and both have Olympic ambitions.

At Newport, it was Lewis who came out on top with a dominant display and a new track personal best of 46.44.77, while Davies was disqualified late on for falling foul of race-walking’s strict technical rules.

However, the race wasn’t all plain sailing for Lewis either, spending a minute in the “sin bin” for picking up three yellow cards – an offence which meant she just missed out on claiming the qualifying time for the 2022 Commonwealth Games in Birmingham.

Lewis said: “It was just amazing to have a race. Because we’ve got the 20k trials in three weeks time – having that rusty feeling from not racing all the season – it was amazing to be able to have that opportunity.

“But, to be honest, there were mixed feelings because it isn’t just the fitness side and preparing for that, it’s obviously the technical side as well.

“So unfortunately, just over halfway of the race, I did get three cards, which meant, I went into the penalty box.

“I had to stand in there for one minute, which was really annoying. I was a bit disappointed, I thought I was alright, I felt good and everything, I was really comfortable and really enjoying it.

“I was looking forward to really pushing on in the second half, hoping for a big PB and getting well under the Commonwealth Games time – that really did feel like that was going to happen.”

With the threat of disqualification hanging over her following the one-minute penalty, Lewis was forced to change tactics.

“So in my head, I thought what I’ll do is I’ll just sit back now and finish the race,” said Lewis. “Just get through it really. So, I was disappointed that I wasn’t able to push my limits because I’ve been training really well.

“The great thing is that Saturday has given me the confidence to know that I’m in a really good place. Even though I knew my training was going well it’s always nice to race, you’ve tapered and you feel good, so you know then it will all pay off.

“I’m really pleased with my fitness and where I’m at, but just need to really concentrate now on a lot of technical work. The road is slightly different, track is always very hard for a for race walkers, but that still is a massive thing I need to work on, I need to get through really well technically to get a good time and finish it as well.”

Finding the balance between wanting to race as fast as possible and needing to be technically accurate is the dilemma facing all race walkers.

It’s something Lewis fell foul of at last September’s British Athletics Championships in Manchester when she was disqualified within sight of the finishing line and a gold medal.

“Again I was actually in a really good place,” says Lewis of the race in Manchester. “I’d been training brilliantly – Chris Jones, my coach, he’s done such a good job of my training plan – I followed it and listened to him and it’s all been really paying off with the fitness side.

“Unfortunately the technical side is still like a barrier for me, there’s a few little bits I need to really still work on. I’ve got an idea what they are so it’s more just doing it.

“At the British champs, what I decided to do with that was just keep pushing on and trying for a good time and to finish and win. The problem was I got a fourth card which meant I was disqualified.”

That’s why Lewis decided to hold back in Newport and make sure she finished, even if it did meant missing out on the Commonwealth qualifying time.

“I did decide to do it differently this time, which might have not been the best thing. I might have still been okay if I pushed on after the penalty, but I did decide to hold back and just go a bit slower and really focus hard on the technical side rather than pushing hard physically, which is really tough to do.”

Lewis is leaning towards following a similar strategy in London – making sure she finishes first and foremost and letting times take care of themselves – even if that means waiting until later in the season.

The top two finishers in the women’s 20K trial will gain automatic selection for the Olympics if they gain the games qualifying standard by June 27. The Olympic qualifying time is 1:31.00, while Lewis’ PB over the 20K distance is 1:34.49.

Lewis says: “It’s very early in the season for us. But I would really like to get a nice big PB. I think I’m very capable of that. Like I said, because of my technical side, I’m going to have to be very careful in the first half and really focus on a bit at a time.

“So my main aim is to win and then to do more races where I can get the qualifying time, but I would like to get close to the time and I think I am capable of that.

“Just as long as I can technically get through it. I know physically I can do it. I’ve done the training. It’s just going to probably take a few races to find my feet at 20K and learn from it as well. So we’re lucky to have the opportunity this early on in the season just to get an idea of where we are.

“So I’m really looking forward to doing a 20k and hope I can hold a really good pace and get really close to the Olympic standard and do a big PB.”

Despite all the challenges raised by COVID-19 for Lewis – from both a sporting and tourism perspective – she considers herself fortunate.

Although all attractions are currently closed to visitors, Lewis says her family was partly able to open the tourism side of their business last summer.

“It was very strange season,” says Lewis. “We were closed completely through Easter which was really strange. But we did manage to get a summer season, which was very different to normal.

“We couldn’t open the cafe but we’re very lucky because a lot of our space is outdoors, so it was a brilliant place for people to come and really enjoy.

“It was a bit of a short and weird season, but we always close anyway for the winter. So that’s not changed too much for us. We’re in a bit of a funny place at the moment because we’re not 100 per cent sure when we’re going to be able to open but we’ll have to wait and see.”

Thankfully Lewis’ training hasn’t been too badly disrupted during the pandemic.

“I’m really lucky,” says Lewis. “I’m used to being a little bit out of it down here in Pembrokeshire. I live on my family farm, so I’ve always done quite a bit of training from my home and on my own.

“I have missed being around other people and maybe going on warm weather training camps like you normally do in January or February. So I have really missed that. It’s always really great to have company and then a bit of warmth as well.

“But I’m really pleased with how I’ve trained in lockdown. I’m really lucky, I’ve actually got a gym at home. I do all of my training on my local roads so it’s very much similar to normal.

“I’m lucky now to have a bit of support to use the track, but through lockdown that was maybe the only disadvantage, that and maybe having a bit more company to train.”

Lewis says having fellow Welsh team-mate and Great Britain international Davies, who has a 20K PB of 1:31.53, to compete with domestically has helped her own development.

“Without having the competition it’s always a bit harder to really go for it,” says Lewis. “So to have people around you to make it competitive is amazing – you’ve got somebody to push you a little bit harder.

“Bethan is also definitely going in the right direction too, she’s doing really well. So, so yeah, Bethan, Gemma (Bridge) and Erica (Kelly), you know, there’s a few girls that really help with it

“I’m sure they’ll do fantastic as well. So it will be a brilliant 20k I’m sure of that. It’s always great to have competition around and we’re all wanting the same thing at the end of the day.”

Lewis is also hugely grateful to the support she gets from her family, which will be particularly valuable if the summer is as busy as she is hoping it will be at home and abroad.

“My family are fantastic. They are amazing support, I wouldn’t be able to train and manage to work on the farm and the park as well. They’re just amazing.

“I can have the opportunity to go off and go and train, go to training camps and hopefully go to the Olympics without having to worry about anything because my family are just brilliant.

“They really do support everything I do. So I’m very lucky on that on that side of it. It works well. We have a good balance.”

Hopefully Lewis will be able to strike a similar balance on the paths and roads around Kew Gardens on March 26.

Joining fellow Welsh internationals Lewis and Davies in London, will be Guy Thomas, of Tonbridge AC, who will be taking part in the men’s trial.

There will also be a strong Welsh contingent taking part in the men’s and women’s marathon trials which will be taking place at Kew Gardens on the same day.