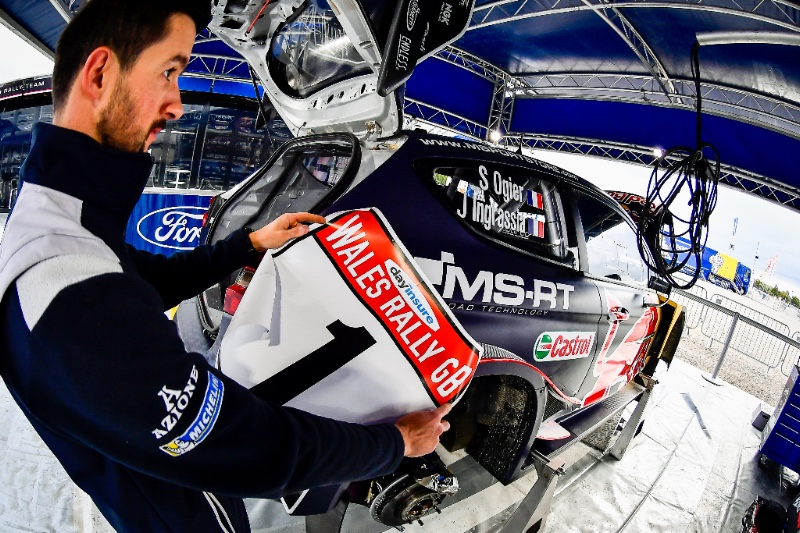 The stages are set for a spectacular scrap for supremacy on this weekend’s Dayinsure Wales Rally GB (4-7 October), after crews completed their final preparations for an event that will pit some of the world’s biggest motor sport stars against both the clock and each other.

One of the most historic and popular events on the FIA World Rally Championship calendar, Dayinsure Wales Rally GB is renowned for pushing drivers and co-drivers to the very limit in their pursuit of the coveted Peall Trophy. This year’s new-look route – featuring 23 gruelling speed tests, totalling just shy of 200 competitive miles – will be no exception.

With a thrilling three-way title tussle in prospect – Hyundai ace Thierry Neuville, Toyota star Ott Tänak and Ford’s defending world champion Sébastien Ogier separated by just 23 points with 90 still in play over the remaining three rallies – the outcome in Wales could prove pivotal to the destiny of this year’s crown.

Having spent the past two days perfecting their pace notes on reconnaissance over the challenging mid and north Wales stages – the final build-up before the competitive action begins tomorrow (4 October) with the traditional pre-event Shakedown in the legendary Clocaenog Forest and a blast under the spotlights at Visit Conwy Tir Prince – the WRC’s ‘big three’ are more than ‘recce to go’.

“Wales Rally GB is one of the classics and an event that everyone wants to win,” affirmed Ogier, who is chasing a sixth consecutive Drivers’ title this year. “It’s one of the most challenging rallies on the calendar; the stages are steeped in motorsport history and the early starts and late finishes make it a true test of focus and endurance. Win in Wales, and you know that you have mastered the challenge.”

“Dayinsure Wales Rally GB is always an enjoyable event,” echoed championship leader Neuville. “With different characteristics to the other gravel rallies and very long days, it will be a tough challenge – physically in particular. I’ve had two podiums in a row in Wales, so it would be nice to continue that streak.”

Tänak has registered the most victories so far this season, with four wins from the opening ten events, and he arrives in Wales off the back of three consecutive triumphs. The Estonian is confident he can keep that impressive run going.

“This is a rally that I like,” he acknowledged. “During our recent test here, we were able to do quite a lot of work to try and further develop the car and get more performance. I believe we did a good job and I’m looking forward to seeing how we compare against our rivals. Everything is possible now in the championship, and I have a good feeling about what we can do in Britain.”

Dayinsure Wales Rally GB is a particularly special event for M-Sport’s Elfyn Evans. Not only is it the Welshman’s home rally – he hails from Dolgellau, and will drive virtually right past his front door on Saturday’s Gartheiniog stage – but it was also where he famously claimed his maiden WRC victory last year. Eleven months on, he has his sights focussed firmly on a repeat.

“Competing at home always brings special motivation,” the 29-year-old enthused. “We have some of the best stages in the world in Wales, and when you see all the Welsh flags and fans cheering you on you can’t help but feel a real sense of pride.

“The win last year is something that we will never forget. There’s always something special about that first victory, but doing it on home soil with all of our family and friends there was really special. This is an event that everyone wants to win. The stages are fast, and mistakes aren’t easily forgiven. Experience counts for a lot here, and we’ll be looking to put all of our local knowledge to good use.”

Following Thursday’s curtain-raiser at Tir Prince Raceway, Friday will see the WRC’s finest tackle a series of new and extended speed tests in north Wales, before attempting to tame the famous mid Wales forests on ‘Super Saturday’. Taking full advantage of the recent closed roads legislation, Sunday’s ground-breaking finale will see cars racing through the streets of Llandudno for the very first time – completely free of charge to view.

Though grandstands and hospitality are sold out, tickets are still on sale with the option of buying online – at significantly discounted prices – or on the gate subject to availability. When purchased now, adult admission starts at just £15 for the Thursday evening curtain-raiser at Tir Prince Raceway, with the premium four-day event pass remaining at £99 for the ninth successive year.

Day Passes for Friday and Saturday cost £28, with Sunday’s Day Pass priced even more attractively at £23. These passes not only give access to all speed tests on that day but also include all booking fees, a copy of the Official Programme (cover price £9) plus car parking on a ‘first come, first-served’ basis.

Full information can be found on the official www.walesrallygb.com website and via the event’s social media channels.