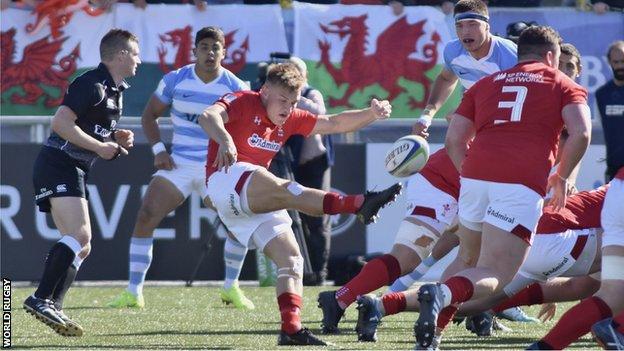 The whiff of revenge is very much in the air in the Wales camp at the World U20 Championships in Argentina.

Hot on the heels of their magnificent 30-25 opening victory over the host nation, avenging their 39-15 reverse against the same side at last year’s tournament, they now have reigning champions France in their sights on Saturday.

Dewi Lake’s side were beaten 32-10 in their opening Six Nations game in France four months ago and if they can overturn that result in similar style to their win over the young Pumas then they could shock a few sides over the next two weeks.

“It is a happy moment for us, and I’m very proud of the performance, but it is only one of five games,” warned Lake after the victory at the Racecourse ground in Rosario.

“But we pride ourselves on our defence, just like the senior Welsh side, and it has come a long way in the five weeks we’ve been together. We dug in there till the end.”

They did that and more in a game in which the lead changed hands no fewer than six times. And there could have been a decisive seventh had the thin red line not held firm as the home side bid for glory off one final scrum after the clock went past 80 minutes.

There was no way through and for the second tournament in a row Wales kicked off with a massive victory based on the boot of Ospreys outside half Cai Evans. Having kicked 16 points in the 26-21 win over Australia 12 months earlier, he kept his cool to land six penalties and a conversion to enable his side to come from behind three times in the match.

Evans kicked the first of his magnificent seven kicks in the fifth minute to give Wales an early lead shortly after they lost the services of Dragons centre Aneurin Owen.

The lead didn’t last long, though, as the pumped up home side hit back with an 11th minute try from prop Francisco Minervino that outside half Geronimo Priscantelli converted before kicking a penalty to make it 10-3.

Wales may have been under pressure, but they kept their shape and composure and managed to work their way into the lead by the break. Some great work by No 8 Jac Morgan at the back of a turning scrum freed up scrum half Harri Morgan and he raced over half-way.

His astute kick over the top of the home defence was latched onto by speedy Dragons wing Rio Dyer and when he was caught in the 22 he lobbed a pass back inside to the supporting Harri Morgan, who side-stepped past the last man to score.

Evans missed his only kick of the match with his conversion attempt, but more than made amends seven minutes later when he kicked his second penalty.

That gave Wales what had at one stage seemed an unlikely lead, 11-10, to take into the second half.

The Pumas turned a defensive scrum on their own 22 in a thrilling try at the other end of the field a few minutes into the second half. Having wheeled the Welsh feed to steal the put-in, they broke clear and kicked across field for right wing Rodrigo Isgro to score.

That was the third change of lead and two penalties in the space of three minutes from Evans’ boot, one of them a monster off the half-way line, edged Wales back in front on 50 minutes.

Things got even better four minutes later for Wales when Argentina lost Ramiro Tallone to the sin-bin and Evans stepped up to hit the mark and make it 20-15.

But the home side weren’t finished yet and hit back with the try of the match from full back Ignacio Mendy moments after Carreras had been denied a try for a shove on Welsh full back Ioan Davies as he raced for the touchdown.

Mendy picked up on half way and somehow weaved his way past four defenders to reach the posts to claim a wonder try. Replacement outside half Joaquin de la Vega landed the conversion and the Pumas were back ahead at 22-20.

It was nip and tuck all the way to the end, but the decisive moment came when Scarlets wing Conbeer raced in to pick and go after a superb 20 metre driving maul by his forwards and stun the home defence with his speed. Evans had no problem with the conversion and then stretched the lead to nine points with his sixth penalty.

There was just time for the Pumas to claw back three points with a De la Vega penalty, but their final shot at glory from a scrum 30 metres out as the clock went into the red zone ended in a knock-on as the Welsh defence stayed strong.

“It was a very good game and getting the first win is very important. We’ve still got four games left, but this was a big win for us,” said Conbeer.

“When I went in to scrum half for my try everyone was worried. But I saw a gap, backed myself and went straight through.

“Going in ahead at half time was big for us. We said the game wouldn’t be won by then and we stepped up in the last 20 minutes.”

Wales’ other try scorer, Morgan, was outstanding throughout and can’t wait for the next assignment this weekend.

“It isn’t easy to play Argentina on their own patch and it’s a massive win for us. We dug in deep in the end and now we need to kick on from this and move on to France this weekend,” said Morgan.