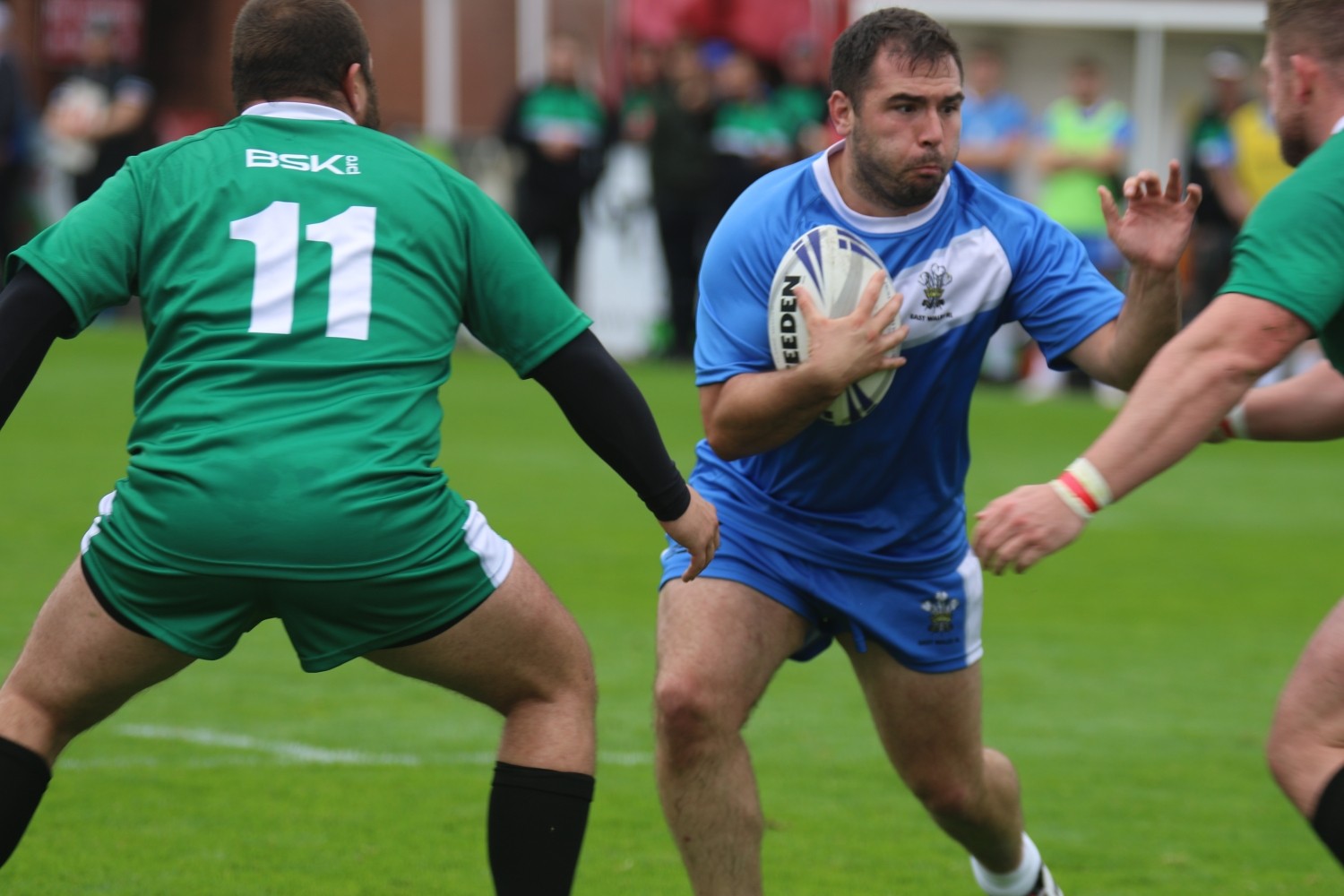 Action from the Games of Origin match between the East (blue) and WEst (green). Pics; www.ianlovell.com

By Ian Golden at Stebonheath Park

In a pulsating Welsh Premier League Origin match, West and East fought out a 24-all draw despite West being down to 12 men for half of the game.

The match, which was played as a curtain raiser to the League 1 encounter between West Wales Raiders and Coventry Bears, was one of the most anticipated South Wales based Origin matches in recent years.

For the first time ever, the selection almost replicated the original Australian concept of mate versus mate – the sides being split into locations (albeit current home addresses rather than birthplaces) instead of dividing the six Welsh Premier League clubs in two.

With the South-East currently dominant in numbers in the Welsh Premier League, it was decided by the clubs themselves at the start of the season to “draw the origin boundary” down the A470, then onto the M4 and then down the A4232.

This has led to a very interesting player selection where club friendships ceased to matter and new rivalries were fought.

West took the lead on 10 minutes. Following a scrum, the ball was worked out to Sam Pridgeon sprinted down the wing to ground. Chris Harries converted.

East levelled six minutes later after Mike Hurley crashed over, converting his own try, before taking the lead midway through the half through a Jarad Hinnem try that Hurley improved.

The scores may have been even at the break but the numbers weren’t for the second 40 minutes, the referee giving West’s Yousif Suliman a red card for punching on the stroke of half-time.

Despite East’s one man advantage, the second half was a tight affair with defences on top.

West actually regained the lead inside two minutes through a Ben Jones try that Harries converted.

East leveled when Hurley twisted his way over for his second try and added the extras and they led again with seven minutes to go when Adam Barlow played a nice one-two with Duane Iles to go in under the sticks. Hurley converted but missed a penalty two minutes later that could have secured things.

West pounded the East line in the final few minutes. Mark Jones was held up over the line but from the next play, Ben Jones scored under the sticks and Harries quickly converted. West were looking for a drop-goal to win it but time ran out.

Next Sunday, the side East face North Wales Origin at Sardis Road, Pontypridd (kick-off 2.30pm) before North host West on Sunday 2nd September at Queensway Stadium in Wrexham in the final match of the series, to be played as a curtain-raiser to North Wales Crusaders v West Wales Raiders.