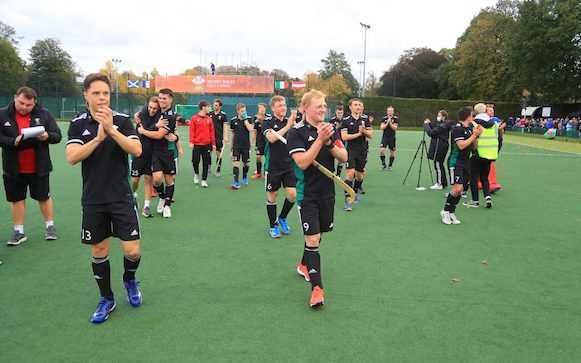 Hockey Wales chief executive Ria Burrage-Male is hoping the men’s recent qualification for the 2023 Hockey World Cup can help inspire the next generation of players in Wales.

The national team qualified for their first Hockey World Cup after an eight team qualifying tournament held at Cardiff’s Sophia Gardens saw themselves and France book their tickets to India for January 2023’s showpiece event.

It was a momentous occasion for Welsh hockey and Burrage-Male wants the achievement to kickstart a new wave of hockey stars in Wales.

“Sport needs role models and the success of qualifying has certainly risen the profile of our senior men, as well as hockey in Wales,” said Burrage-Male.

“You cannot be what you cannot see – hopefully we have inspired a future generation to pick up a stick and enjoy some quality social interaction through hockey, whilst keeping fit.

“We have a great domestic set-up in Wales, with accessible clubs across the whole country and we encourage families, schools, and our communities to get involved in this brilliant game.”

There is a busy 18 months coming up for the Wales team with the 2022 Commonwealth Games, 2022 European Qualifiers and the 2023 Hockey World Cup all on the horizon.

Burrage-Male is under no illusions on how tough this will prove to be financially for the organisation.

“We are extremely grateful to Sport Wales and the National Lottery for the grant we receive to deliver performance sport.

Men defeated Ireland to qualify for the 2023 World Cup🥳: https://t.co/bbMug3lRvX

“Unfortunately, this grant does not cover the whole programme which means the players part-fund the remainder.

“Whilst success breeds success, it also costs money. A trip to India to compete in the World Cup

is a prime example.

“We’re seeking support from commercial partners to help fund both aspects and ensure our men are fully prepared to compete.”

Now that qualification has been achieved, the players will return to their club sides before regrouping in December, in preparation for next year’s Commonwealth Games in Birmingham and the European Qualifiers.

The players will then attend a warm weather training camp in December of next year as the final step of preparation for the World Cup.

One of the players aiming to be heavily involved is Lewis Prosser. He gained his 159th cap for Wales at the qualifying event in Cardiff last month and became Wales’ most capped player in

Welsh Hockey Is Gearing Up For A Year Like No Other, Says Lewis Prosser

Despite the excitement of qualifying for the World Cup for the first time, Prosser is keen to stress that Wales won’t be looking too far ahead into the future.

“With the World Cup still being more than a year away we have a lot of things going on before then,” he said.

“We’ve got the European Championships, the Commonwealth Games and potentially a few more competitions. Performing the way we have recently will hopefully get us invited to more events leading up to the World Cup.

“It’s an amazing feeling qualifying for the World Cup, the fact it’s the first time its ever happened is such an accomplishment for the group.

“With it being so far away it is hard to set any goals right now. We’ll go there with plenty of confidence and look to compete with the top countries.

‘The events in the next year should be good preparation for us.”