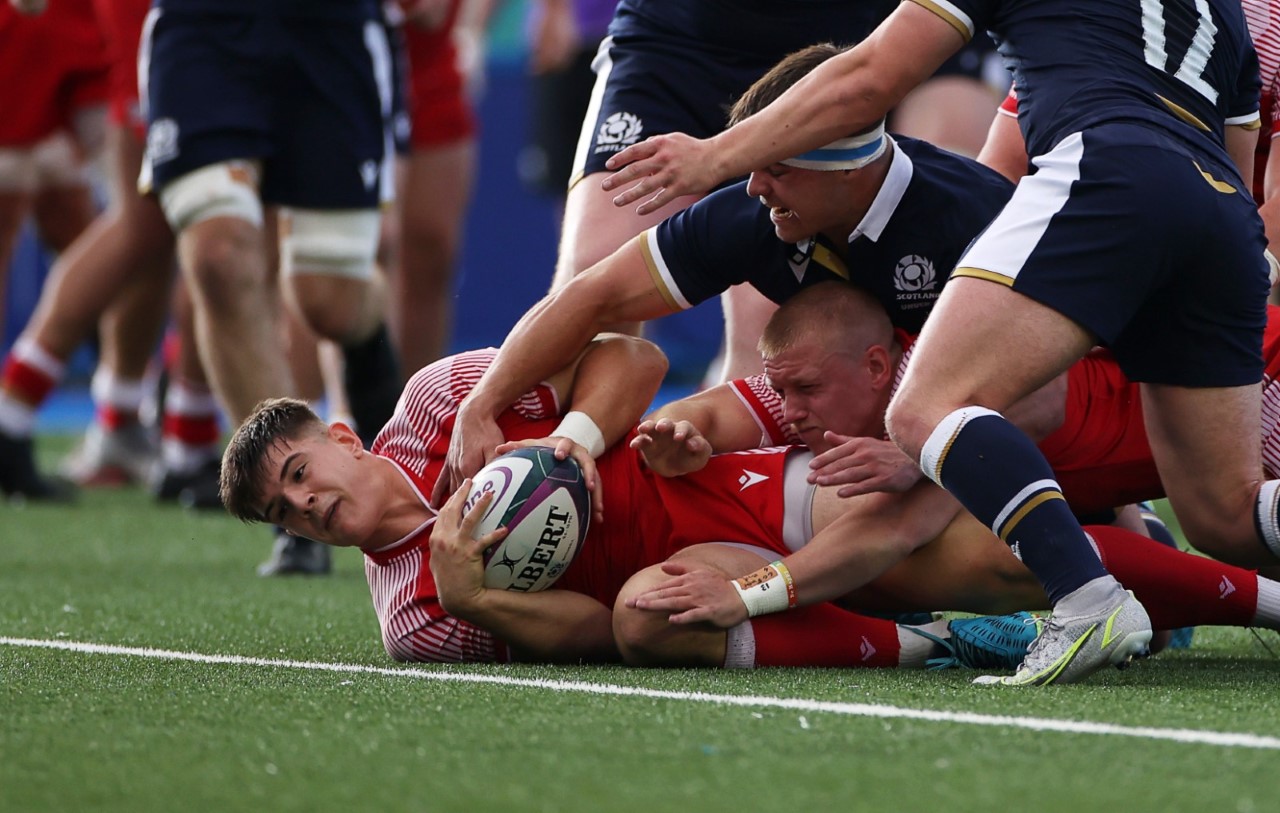 Sam Costelow kicked a match winning 10 points in his 18th and final appearance for Wales U20s as he steered his side to a 32-24 win over Scotland.

It meant Wales finished their U20 Six Nations campaign in fourth place in a frantic match which saw the lead change hands seven times and a total of eight tries. This defeat left winless Scotland with the Wooden Spoon.

The man of the match was Wales Hooker Efan Daniel, he was delighted to end the campaign on a high.

“The boys worked really hard all week and put everything into the game,” said Daniel.

“I think we deserved nothing less, we really worked for each other out there and came away with what we wanted.

“We had great spirit, great heart and dug in to grit it out.”

Wales head coach Ioan Cunningham is pleased with how much is players have learnt during the tournament and is optimistic about the future.

“Credit to the boys, we showed a lot of fighting spirit through this campaign and that shone through at the end when we were fighting to win the game with 14 men,” said Cunningham.

“There has been massive strides made with the learning of these young players. They have learnt how to win, the importance of discipline and how that effects territory.

“Most of these boys will be back next year so hopefully they can use this as a platform to build upon.”

The first half was a fast paced affair but the second took a different course and was very stop-start with lots of stoppages for injuries and TMO checks.

A lively start for Scotland sees them take the lead through a Cameron Scott penalty in the fourth minute. They earnt the penalty after several attacking phases deep inside the Wales 22.

Shortly after, this end to end match saw Scotland hit back through hooker Patrick Harrison who scored in the left corner. Cameron Scott then converted from out wide to give Scotland a slender three point lead.

Another crash over the line, this time from Joe Hawkins! End to end here in the final game of the competition.

This constant flow of points showed no sign of slowing down as Wales soon edged back in front. Scrum-half Ethan Lloyd delivered a crash ball to Joe Hawkins who barged over to score another converted try for Wales. Wales now led 14-10.

This crazy run of relentless points scoring continued through Michael Gray who took advantage of some weak Welsh tackling to give Scotland a 17-14 lead.

Unbelievably, Wales instantly hit back again as prop Cameron Jones bundled himself over after some patient build-up play where Wales came close to scoring on many occasions. Costelow failed to convert but Wales were now in front by 19 points to 17.

The final 15 minutes of the half saw the points scoring ease, but Wales started to get a bit of a stronghold in the game and could have easily scored again if it was not for a few unforced errors. Ioan Cunningham’s men then took their precarious two-point lead into the half-time break.

The second half began in unfortunate circumstances for Wales with winger Carrick McDonough being stretched off with a serious looking injury after colliding with Scotland winger Ollie Melville.

My biggest fear is losing my vision, would never intentionally touch anyone eyes. Sorry

Wales had to play nearly 35 minutes of the second half with just 14 men after flanker Harri Deaves was sent off for making contact to the face of Scotland’s Tom Banatvala.

Scotland then made almost instant use of their man advantage when number eight Ben Muncaster powered over from close range. Scott once again converted to give Scotland a five point lead.

Just like the first half, this spirited Wales side responded quickly and regained the lead through a penalty try. Morgan Richards stepped inside but was tackled high by Ollie Melville and consequently dropped the ball over the line. Melville was then also sent to the sin bin for 10 minutes. Wales now led 26-24.

Five minutes later, Wales extended their lead through the reliable boot of Costelow who struck over from 45 metres.

During the final 15 minutes, 14-men Wales showed some real grit and determination to defend superbly to keep their opponents at bay.

With three minutes left, Costelow struck over a penalty from near half-way for Wales to win this pulsating match by eight points.