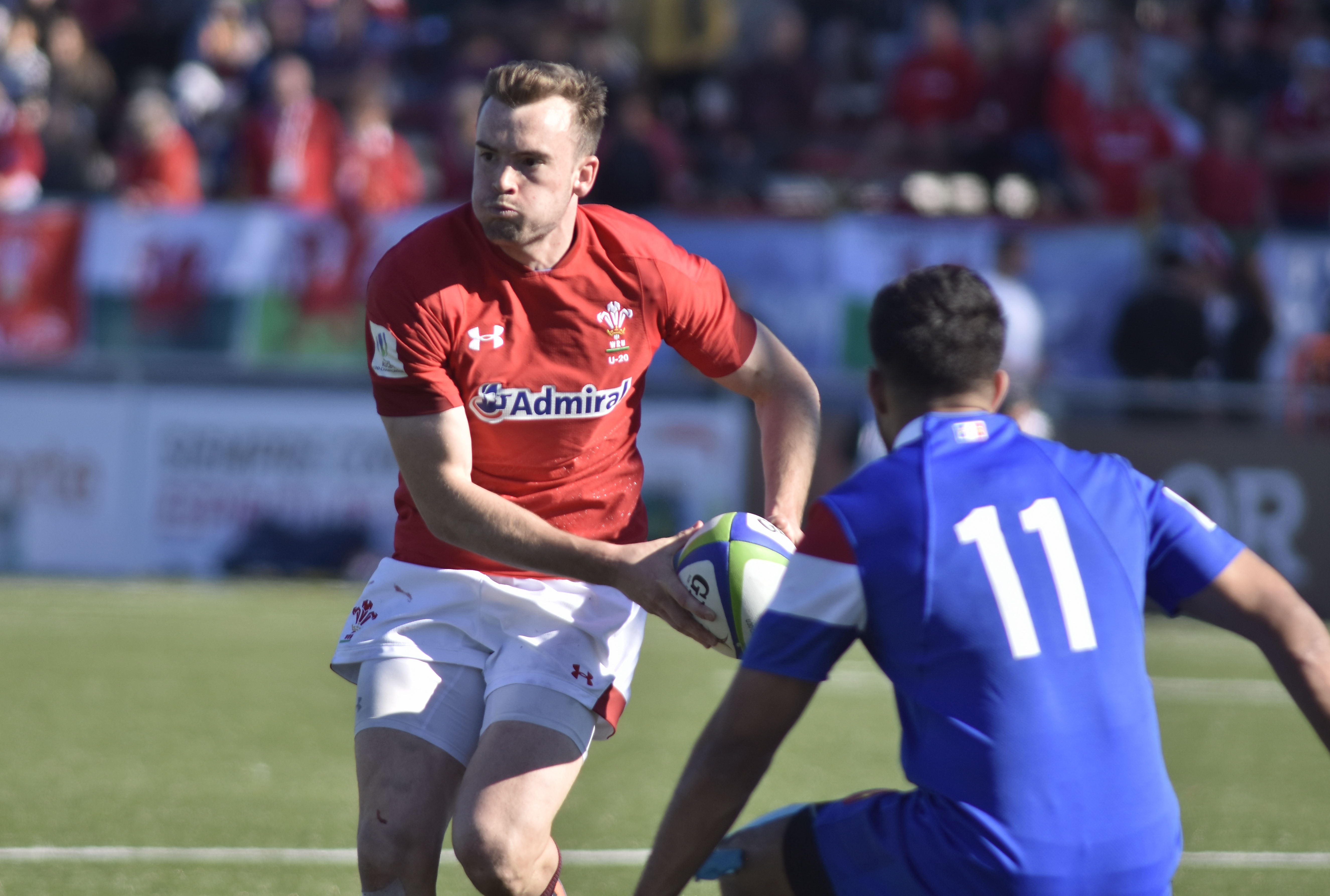 Wales fly-half Cai Evans tries to find a way through the France defence in their Pool A match at the Racecourse Stadium in Rosario on day two of the World Rugby U20 Championship 2019 on 8 June. Photo: Leo Galletto/World Rugby.

Wales were overpowered by the reigning world champions, France – 32-13 – in their second outing at the World U20 Championships and will have to beat Fiji on Wednesday to stay in the running for a top tier finish.

Welsh hopes were high after their impressive 30-25 opening day win over the host nation, but they were simply brushed aside by a power-packed French team who repeated their four try, 32-10 Six Nations victory earlier in the year.

Fiery up front and fluent behind, the French forced Wales to miss more than 30 tackles as they conjured up 25 off-loads as they dominated possession and territory. Against a weaker, less cohesive side they would have run riot.

Wales got off to a great start when a brilliant midfield break by Ospreys centre Tiaan Thomas-Wheeler led to the first of two tries from Scarlets wing Tomi Lewis. But as the French won more and more possession they began to dominate the game.

By half-time they were 10-8 ahead thanks to a penalty from outside half Louis Carbonel and then a try from the No.10 as he raced 20 metres to the posts to round off a thrilling midfield break by hooker Rayne Barka. He also added the conversion to make it 10-5.

Cai Evans then knocked over a penalty to cut the gap to two points before the interval, but the second half became one-way traffic as France enjoyed 72% possession.

Barka had a try ruled out by the TMO for a forward pass, but moments later Carbonel unlocked the Welsh defence with a neat chip over the top on half-way.

Full back Alexandra De Nardi ran onto it and, after he was hauled down in the 22 by Ryan Conbeer, the ball was recycled for wing Vincent Pinto to stretch out to score.

The French were able to add two more tries before the end to snatch a vital bonus-point.

Carbonel increased his side’s advantage with a 55th minute penalty and the third try came10 minutes later when replacement full back Matthis Lebel went over wide out on the left.

Carbonel added the extras, but Wales made the most of their one big scoring opportunity of the second half in the 73rd minute from a five metre scrum in front of the French posts.

When the forwards were held up on the line on the left flank, the ball was switched from to the right for Lewis to score again.

Replacement centre Julien Delbouis wrapped things up with the bonus-point try from the last play of the game and Carbonel kicked the conversion to stretch the winning margin to 19 points.