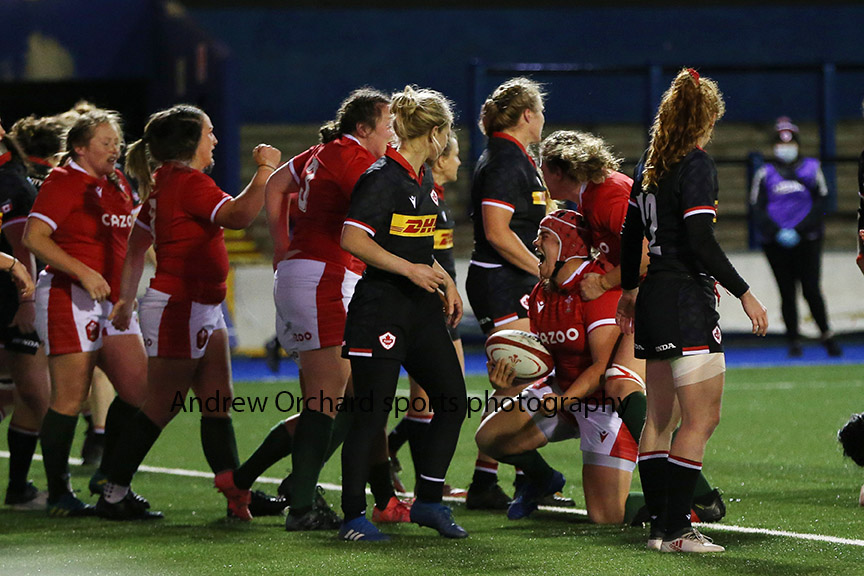 Wales women’s coach Ioan Cunningham has praised his team for their autumn efforts – even though they were reminded how far they still have to go by a formidable Canada side.

Cunningham saw Wales lose 24-7 at Cardiff Arms Park on Sunday night, even though the Canadians played for the last 50 minutes with just 14 players after captain Olivia DeMarchant was sent off for a dangerous tackle.

The North Americans showed why they are ranked the third best team in the world as they shrugged off the loss of their skipper and prop to outscore Wales by four tries to one.

“I thought we were excellent for the first 40 maybe 50 minutes then their bench made a big difference,” said Cunningham.

“We’ve got great learnings to take from the game and the girls have been excellent throughout this campaign.

“It has been excellent putting the new structures in place, a new coaching group, spending quality time together as a team and improving from Japan and South Africa. I’m happy with the whole campaign.”

After winning comfortably against Japan and South Africa, the defeat means Wales stay at 11th place in the global pecking order.

Wales were at an advantage early on with Tyson Beukeboom getting a yellow card, leaving Canada down to 14 players before their red card.

Recently recalled Wales hooker Carys Phillips scored the first try of the match. Elinor Snowsill was successful with her conversion, putting Wales seven up early on.

DeMerchant then received her marching orders for a high tackle on Wales flanker Bethan Lewis, leaving Wales facing 14 players for the remainder of the match.

Wales held their 7-0 lead until half time, but the second period belonged to the tourists despite their numerical disadvantage.

Canada got dangerously close to the line and earned their first try through Courtney Holtkamp, followed by an unsuccessful conversion. The comeback was clearly on.

An impressive second half from Canada’s Senior Women’s 15s squad sees them finish their Fall Tour with a 24-7 win over Wales! 🍁#RugbyCA pic.twitter.com/R8ipmHsO9s

Canadian DaLeaka Menin then crossed for Canada, with Alexandra Tessier successful with the conversion, leaving the score 7 -12 to the visitors.

Wales saw this as a good opportunity to get some replacements on with Cara Hope coming on for Caryl Thomas, Donna Rose on for Cerys Hale, and Gwen Crabb on for Natalia John.

But Canada extended their lead with a try from Sabrina Poulin, and although Phillips returned to the pitch, a crucial line out loss resulted in Canada scoring their fourth try.

Ngalula Fuamba went over and a successful conversion from Tessier lengthened Canada’s lead to 24-7.

Megan Webb then came on for Kerin Lake, Flo Williams made her debut and came on for Elinor Snowsill, and Kat Evans came on for Carys Phillips

There was a special moment at the end of the game when Wales centre Hannah Jones was proposed to in front of her team mates by her now fiancée, Llandovery and Italy U20 prop Dino Dallavalle.