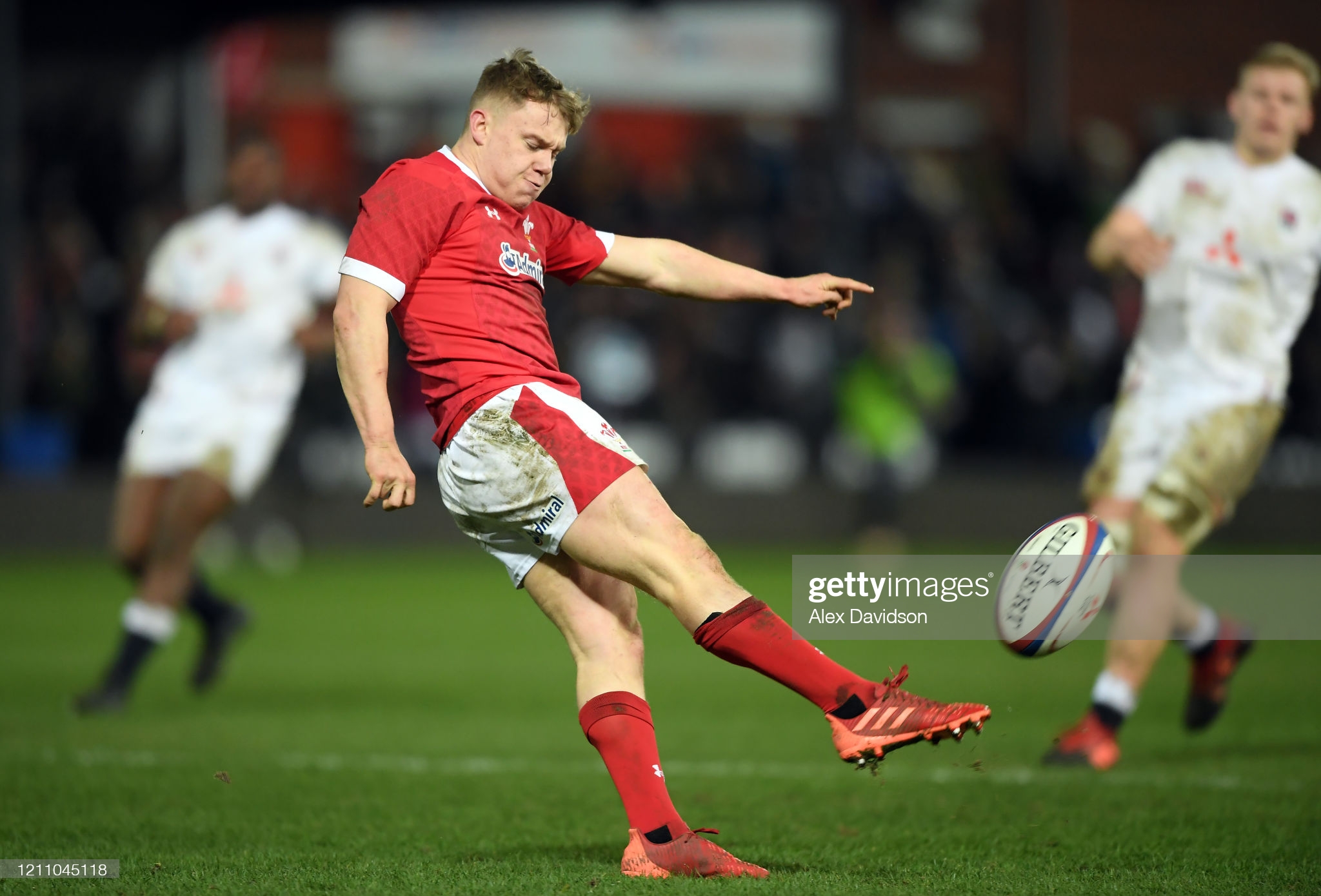 Sam Costelow in the kicking groove for Wales U20. Pic: Getty Images.

Most English eyes will be focused on Wembley tonight, but for age group rugby fans there’s another significant showdown happening at Cardiff Arms Park – Wales v England. The U20 Six Nations clash sees unbeaten England looking to take a penultimate step towards a Grand Slam and Wales aiming for their first win, nicely chilled thanks to a certain TV show as Tom Prosser reports.

Wales U20 star Sam Costelow has been preparing to kick England out of their Grand Slam villa by watching Love Island.

The Scarlets youngster has revealed he and the rest of the squad have relaxed ahead of their Six Nations showdown by nightly dates with the ITV show, interspersed with occasional games of table tennis.

Wales fans will be relieved to know that Costelow has also found time to hone his goal-kicking skills, which will need to be at their sharpest if Wales are to spring a surprise at Cardiff Arms Park on Wednesday.

The clash – which is live on S4C – couples up flustered Wales, who have lost two of their three games so far, against smooth-talking England, who have delivered their lines perfectly and are unbeaten at the top of the table.

The Wales U20s went to watch the senior side in action on Saturday against Canada and then bonded over a certain reality show.

“We went to watch Wales versus Canada as a group and then when we got back we watched the Lions, so that’s always good to keep everyone occupied,” said Costelow.

“We also have lots of ping pong tournaments and Love Island at nine o’clock is always a bonus.

“It is tough in the bubble. I don’t think I have ever been away from home for this long before, but I have had time away when I was with Leicester.

“But a lot of the younger boys in the squad haven’t really been away much so it’s important to keep conversations high.

“We had a Zoom call with Lloyd Ashley from the Ospreys, who speaks well about mental health. He said it’s important to have lots of conversations and keep spirits high so that’s what I’ve tried to do.”

If Costelow was having to look for votes to remain in the age group side then he could quickly point to his abilities as a kicker.

Not only did he kick 18 of Wales’ 25 points in their one victory over Italy, but his accuracy with the boot, whether kicking at the posts or out of hand, has also been a notable feature in his handful of appearances at regional level.

“I think my kicking is definitely a weapon for us. If you can get three points it starts to put pressure on teams as it keeps the scoreboard ticking over.

“Ultimately, it’s up to Alex Mann, the captain. I look at him, he gives me the nod and then puts the ownership on my shoulders.”

At Parc y Scarlets, Costelow is able to learn from one of the best kickers in Welsh rugby history in Leigh Halfpenny, but his admiration for players who can combine a running game with a deadly ability to punish opposition offences goes back to his childhood.

“The boys have trained well all week and are ready to go,” says Ioan Cunningham as he names his side to take on England.

“I started playing rugby when I was four at Pencoed RFC. I liked watching the likes of James Hook and Dan Carter and just generally watching the games they were in. The more I can take on board the better.

“After training at the Scarlets, I’ve been kicking with the likes of Leigh Halfpenny and picking up loads of tips up from him.

“It’s great spending as much time with him as possible. It’s important to pick up lots of advice.

“It’s just consistency, I’ve been doing it for years. It’s important for it to feel like second nature so it’s easy to be at my best in a game situation.”

It’s not difficult to imagine Wales will need to have Costelow at his absolute best on Wednesday if they are to unseat England’s chariot ride to the age group Slam. A few others in their forward pack, would help the cause, too.

You can watch live on @SixNationsU20 YouTube/England Rugby’s Facebook page with kick off at 20:00 BST 📺

The Red Roses have looked powerful, dynamic and ruthless when they have needed to be in beating France, Scotland and Ireland so far.

Harlequins hooker Sam Riley has been one of England’s main threats, scoring four tries in those three matches.

Coached by former Wales and Lions prop Adam Jones at Quins, Riley looks  destined for big things and has won a man of the match award and the try of the round accolade so far.

Other England players of note include Joe Lancaster, who is the son of former England head coach Stuart, Jack Clement of Gloucester, who was man of the match in their crucial win over Ireland, and Orlando Bailey, who featured regularly for Bath last season.

Flanker Clement – who was good enough to play 11 matches for Gloucester last season – said: “At the end against Ireland, the character of the boys shone through and we showed how tight a group we are and how much we want to win this tournament.

“We’ve got two more big tests in Wales and Italy and we won’t underestimate their quality because they’re good teams and will challenge us in different areas.”

Join the Clwb Rygbi team live at the Arms Park for live coverage of the rugby match between Wales and England in the Under-20 Six Nations Championship. English commentary available. K/O 8.00.