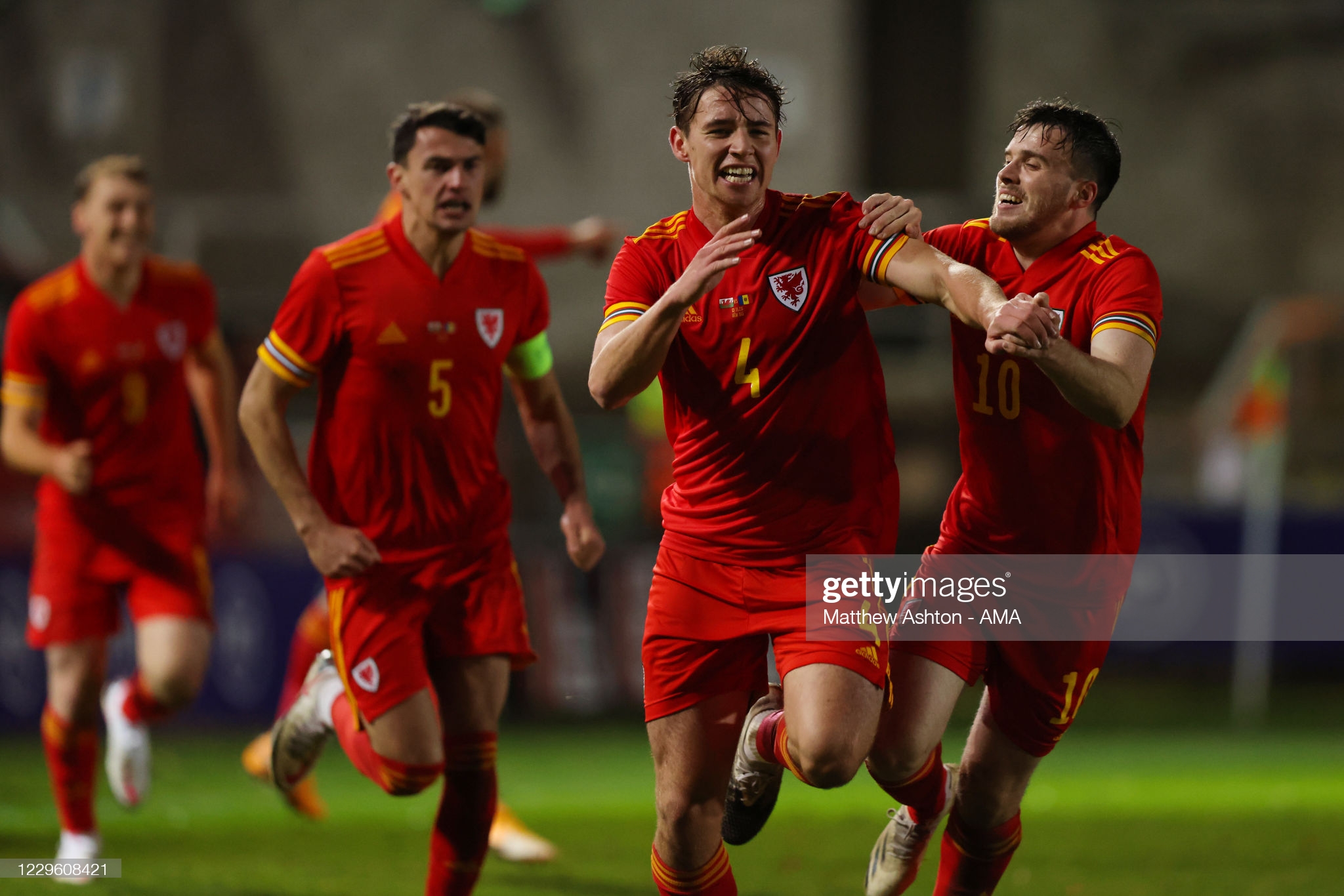 Terry Taylor of Wales U21 celebrates after scoring during the international friendly against Moldova on November 13, 2020. Pic: Getty Images

Terry Taylor hopes the influence of Jimmy Floyd Hasselbaink can help propel his Wales U21 side to victory over the Republic of Ireland in Wexham today.

The young Wales midfielder has come under the gaze of the former Chelsea star after Dutchman Hasselbaink returned to manage Burton Albion in January.

Hasselbaink signed Taylor from Wolves on a two-and-a-half-year contract in the last transfer window – becoming the seventh player brought in by the one-time Cardiff City striker.

“It’s been great to work under him [Hasselbaink] and It’s one of the questions that I get asked most,” said Taylor.

“When he speaks, you really listen because you know he’s got such a good knowledge of the game as he’s been there and done it before.

“He’s got the experiences of being a top player and he’s helped me a lot in different ways. Obviously, he was a striker and I’m a midfielder, but he still always helps me out because he has a great knowledge of the game.”

Taylor spent the first half of the season on loan at Sky Bet League Two side Grimsby Town, for whom he made 14 appearances across all competitions prior to his recall in January.

He has since played seven games for Burton and believes the opportunity of playing regularly at club level will stand him in good stead when it comes to gaining international duty.

Wales take on Ireland at Colliers Park, as the squad begin their preparations for the 2023 U21 European Championships, the qualifiers for which begin in June.

Taylor made his senior debut for Wolves last season, coming on as a substitute in a Carabao Cup game away at Aston Villa, and then made four appearances for Wolves U21s in the Papa John’s Trophy.

Born and raised in Aberdeen, Taylor qualifies to play for Wales through his mother’s family and is keen to gain more club outings in order to underpin his international ambitions.

“It was great to make my full debut last week. It’s still a long way to go, but I’m enjoying my football at the moment.

“Obviously, when I went into the club at first, they were struggling a bit, and they just had a new manager bringing in young players like myself. We’ve gone on a good run since which has been enjoyable.

“It’s been a real positive couple of weeks since I’ve joined, so I’m really enjoying it there and looking forward to what lies ahead.

“There were mixed feelings for me when leaving Wolves and it was really tough decision as I’d been there for nearly three-and-a-half years. But I thought it was the right thing for me to do in order to kick-start my career.”

Since Taylor arrived at the club, Burton’s change in form has seen them move up to 18th place in League One and they are now looking up the table rather than down.

Even though he is still a teenager, Taylor was a part of a Wales senior training camp in May 2019, working alongside some of the best in world, including Gareth Bale, Aaron Ramsey and Joe Allen.

And he hopes that experience can inspire him to keep performing on both the domestic and international stage.

“It was a great week and probably the best experience I’ve ever had in football as it’s something every player dreams of doing,” he added.

“I went to a camp in Cardiff a couple of weeks prior and impressed and the manager picked me up and offered me the chance to train with the national side in Portugal, so that was hugely inspirational for me.

“Seeing the level that they are at and knowing that was where I wanted to get to was a real inspiration and something that still continues to motivate me now.”