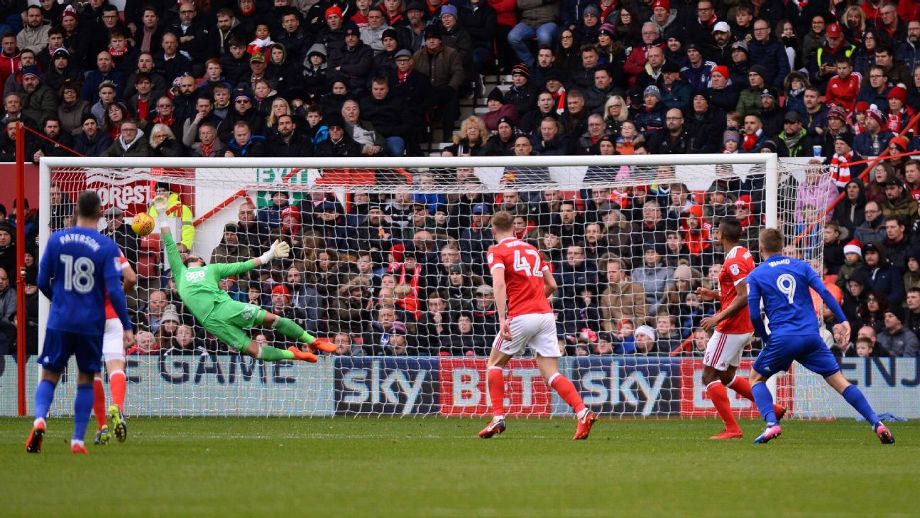 What a belter! Danny Ward's cracker of a goal for Cardiff City at Nottingham Forest. Pic: Getty Images.

Yorkshireman Ward, a former Rotherham striker, is keen to show he is 100 per cent fit after having surgery on a knee last season and taking a bang on the same spot at Torquay United.

Bradford-born Ward had only been on the pitch for 16 minutes and was keen to play on, but manager Neil Warnock, who confirmed it was a minor impact problem, opted not to take any risks.

Danish ace Zohore needs match minutes because he could only play 45 minutes during the week-long tour to Devon and Cornwall after his first child, Kenzo, was born.

He joined the tour in midweek and started in the 1-1 draw against Torquay before being replaced by Gary Madine at half-time.

The likely scenario is that Zohore will play at centre-forward with Ward playing wide and Bobby Reid filling the number 10 role.

Ward, 26, has not played a competitive match in 2018, having injured a knee in December, and is keen to make a big impression preparing for Premier League football.

“It feels great to be back playing football,” says Ward. “I was out for a long time and just being out on the pitch feels great.

“It was an okay start for me last season, but I didn’t play as much as I would have hoped. Then the injury hit me hard.

“I felt part of what was going on because there is great togetherness in our group and that is whether you are in the team or not.

“The guys made me feel part of the season. Okay, football wise it wasn’t good, but it was brilliant to be part of a promotion season.

“Now I’m back and will work as hard as possible to give myself best opportunity of playing. There are no problems with my knee, none at all, and I’m feeling good.

“My preparations for the new season started well before we reported back for training and the knee is feeling really good.”

Ward has scored four goals in six starts and 12 substitute appearances, netting his first against Fulham and his best during a 2-0 win at Nottingham Forest.

He netted City’s second goal, cutting in from the right, driving towards the penalty area and then smashing his shot into the net from 20 yards.

“That was, without doubt, the highlight of my season,” says Ward. “I enjoyed my first Cardiff goal, against Fulham, but the strike at Forest felt special.”

Manager Warnock has added new signings Reid, Josh Murphy, Greg Cunningham and goalkeeper Alex Smithies to his squad, while he is intent on bringing in a midfield player, probably Marco Grujic from Liverpool, and a striker.

Both will be loan deals and Ward says: “The gaffer has already brought in some top players with great quality.

“The new guys have fitted in perfectly and have not changes the group dynamic at all. It’s looking really good.

“My feeling is that the squad we had at the end of last season was good enough to keep Cardiff City in the Premier League and the new guys have added extra. We have competition for places which keeps everybody on their toes.

“We know how hard it’s going to be in Premier League. After all, we had a taste of it last season against Manchester City in the cup.

“We have looked lively in pre-season and there are good tests coming up.

“Team spirit will be a massive plus for us. We will stick together no matter what. We have a strong core and there are no cliques.

“Bluebirds fans were great last season and we hope they will give us the loud backing that can really lift the players.

“Personally, I can’t wait to start the new season and I’m working flat out to ensure I am in tip top condition.”

Aron Gunnarsson, who was Iceland’s captain during their World Cup campaign, is set to make his first appearance against Rotherham, although Warnock’s coaching staff have worked him hard in training.

The Bluebirds will make a late assessment on Gunnarsson, who may be held back until Saturday’s match at Burton Albion.

Michael Smith scored twice and took his pre-season tally to five, while Jon Taylor was their other scorer.

New signing Billy Jones was given his first run-out, while striker Jamie Proctor made a tentative comeback after nearly a year out through injury.

One thought on “Ward, Zohore Both Want To Lead Way For Bluebirds”