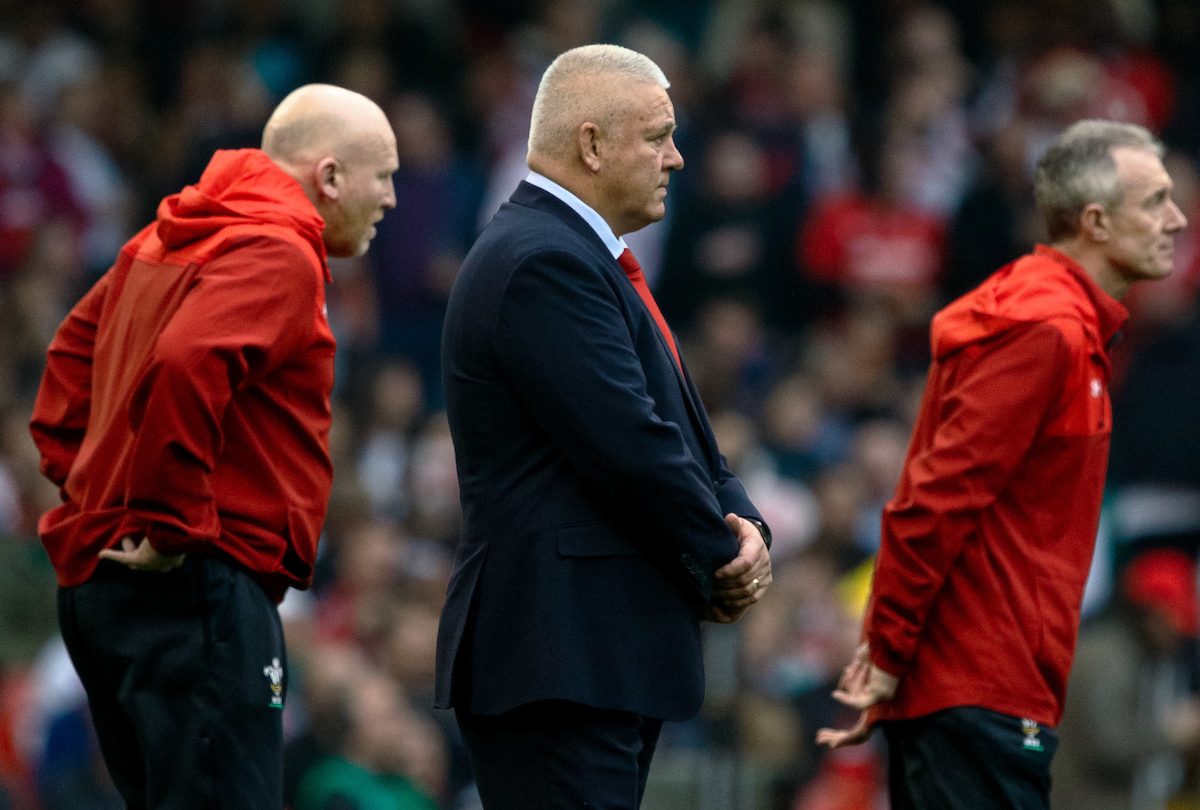 Warren Gatland is back next week – for one night only – when he takes charge of the Barbarians against Wales. For Geraint Powell, Gatland’s final farewell should focus minds on what the New Zealander believes is still flawed within Welsh rugby.

The Gats is gone. Long live the Gats!

Well, not quite, for Warren Gatland will be coming to Cardiff a week tomorrow as coach of the Barbarians for the uncapped match against a Welsh side under his successor and fellow Kiwi Wayne Pivac, but you get the point.

He is likely to receive a warm send-off, given the trauma of the 1990s and 2000s for many fans and the madness of the 2007 World Cup that led to his being appointed.

His record and reputation with Wales since 2008 has hardly been diminished by adding another Grand Slam and World Cup semi-final to his tally this year.

The frustration at Wales not being able to safely and successfully get outside the South African blitz defence was put into context by the way the Springboks subsequently dismantled the English set-piece and then their entire game plan.

Several of my more cynical friends have pointed out that, even now, Gatland’s influence upon Welsh rugby might not be finished.

For, if Wales do not have good Six Nations campaigns in 2020 and 2021, his selections as British and Irish Lions coach could well either relieve or pile the pressure upon his successors.

Gatland now heads home to New Zealand and the Chiefs regional franchise in Super Rugby, headquartered in the heart of his beloved home Waikato province, where he was a technical consultant in 2006-07.

In an era when many feel that the Welsh semi-professional and grassroots club games have been left to wither on the vine – and the seriously flawed and uniquely Welsh regional model has almost continuously imploded – the Test team that financially drives Welsh rugby has become, for many rugby fans, an oasis of relative stability.

The conservative playing style, at times very conservative, of his Welsh teams, essentially a “defence plus” model overseen by Shaun Edwards, has seldom appealed to the Welsh romantics and who hunger for “the Welsh way”.

Whatever that is, given the enormous variety of playing styles across Wales. It usually means throwing the ball around “willy nilly” and, in the modern game, getting smashed back across the gain-line, playing unacceptably high risk rugby and the scoreboard deteriorating alarmingly over the final quarter.

Many fans demand that Wales head coaches not only win, but also win prettily. Some fans would even prefer pretty rugby to winning rugby.

That was never the Gatland way, for his teams have to earn the right to go wide, and his Welsh teams have increasingly become difficult to beat on the scoreboard, even in those rare matches where Wales are well beaten on the pitch.

Australia and South Africa, if maybe not New Zealand, no longer view a visit to Cardiff as an easy leg on an end-of-season tour in November.

Gatland’s teams have also reflected the reality of the health of the domestic supply chain in Welsh rugby, especially before the WRU used international rugby caps to deter many players from taking lucrative club contracts in England and France.

It is fair to say that many Welsh backs over the last decade have, at regional level, had to live off a pretty thin gruel of good attacking ball against teams from the well-structured Irish provincial game and the best of the Anglo-French clubs.

And yet, at Test level, Six Nations silverware has been achieved on four occasions with limited but heavily structured game plans.

Is Warren Gatland disclosing that he personally agrees with Terry Cobner’s sensible intended NSEW regional/provincial template for domestic Welsh professional rugby, before all the tribalism, parochialism and politics took over in 2002-03, actually that “radical”…? https://t.co/rmp4wazix1

Sometimes the rigidity could go horribly wrong, such as one too many downfield kick chases – to avoid an English attacking line-out and driving maul – in the final minutes against England in 2017, albeit in the sabbatical absence of Gatland, but usually it was just prudent risk management.

Given his propensity to launch the occasional “verbal grenade” at Test match press conferences, and with a book to sell, it was perhaps unsurprising that Gatland might throw a couple more and disclose his personal opinions on some topical tribal Welsh rugby issues.

He didn’t evade when Gareth Rhys Owen interviewed him for a BBC Wales podcast earlier this week and asked him about a number of big picture/long-term questions mentioned in his book – namely on the state of the tribal and parochial Welsh regional and semi-professional club games.

Although many would argue that he was mostly merely stating the bleeding obvious on numerous issues, particularly the widespread concerns over a seeping short-term football mentality, and the need to prioritise putting in place long-term elite performance training and preparation environments across the regions from coaching to nutrition, this being Welsh rugby in 2019 the interview was still considered controversial.

Neither did he shy away when queried about his personal opinion upon the undoubtedly catastrophic blunder in 2003-04 in not setting up a North, South, East, West (NSEW) model of regional/provincial rugby for the entire country i.e. for the many, not the few.

By getting the original boundaries wrong, and in so doing excluding the northern half of the country and alienating many in the south and especially in the eastern Glamorgan and Gwent valleys, the model has never become remotely viable and it was good to see him openly discuss the problems and the reasons behind the failure to compete with the Irish provinces.

Many of us actually feel sympathy for Llanelli and Neath/Swansea fans, because their clubs at least made a better job of things under the flawed 2003-04 model than those clubs further east (albeit with substantial state aid through new stadia).

✅ Always keep a good and close relationship with your medical team
✅ RTP day may not be predicted accurately every time pic.twitter.com/3ptpkMwgQS

But the status quo is neither sustainable nor in the best interests of Welsh rugby, and half of the Ospreys region is in the wrong region altogether just because nobody wanted to give the entire “one too many” Celtic Warriors’ region to the Blues (the region where Bridgend and surrounds belonged all along).

Bridgend is clearly a dormitory town of Cardiff, even if some commute to Swansea.

His only real controversial suggestion, under a logical regional rugby model, was re-allocating the District C of the eastern Glamorgan valleys to the Dragons and leaving the Blues as essentially a city and Vale of Glamorgan region only.

I actually floated this idea on my private blog several years ago and ran smack into the problematic reaction I expected.

Not only did it offend deeply ingrained Welsh sensibilities over rewarding a poor attitude towards regionalism and be contrary to Welsh egalitarianism, and would arguably result in three regions and with the South being more of a ‘super’ club, but there would be no real affinity in District C to a team headquartered in Newport.

On a player development level, how could the Dragons’ age grade additionally accommodate the Rhondda, Pontypridd, Cynon Valley and Merthyr schools district alumni?

Perhaps more pertinently, how would the Blues even fill their age grade with sufficient quality following this loss?

He also frankly admitted that he had focussed on his own orbit and integrated more with WRU age grade and sevens teams, rather than try to change and properly structure the external regional game not under his direct control.

So this is the Queue outside Chepstow Books waiting for Wales coaching legend Warren Gatland – Thanks for all that you have done for Welsh rugby over the last 10 years, and very best wishes for the future – looking forward to the Lions tour in 2020 pic.twitter.com/SlIQcMaX72

This was undoubtedly the same approach taken by his arch Kiwi rival, Steve Hansen, during his time in Wales 2002-04.

He also provided his opinion on the Indigo WRU Premiership, and how he would have liked to move towards an eight+eight, two tier model to support the regional game.

But therein lies the problem, with many such club fans not remotely additionally invested in the regional game so not inclined to take unpopular action at club level to support the regions.

The practical issue of financially sustaining such a semi-pro club, and facilities, on potentially so few fixtures, is merely compounded by those fans not additionally having a regional team they can support.

Many would argue that New Zealand rugby has been very tribal at times, particularly at provincial level, but the NZRU have not in the professional era allowed their regional structures to develop in a way that triggers and supercharges their tribalism.

Gatland, love or loathe his era, will never be forgotten in Welsh rugby.

One thought on “Warren Gatland Fixed A Lot In Welsh Rugby . . . Despite A Tool Box That’s Not Fit For Purpose”