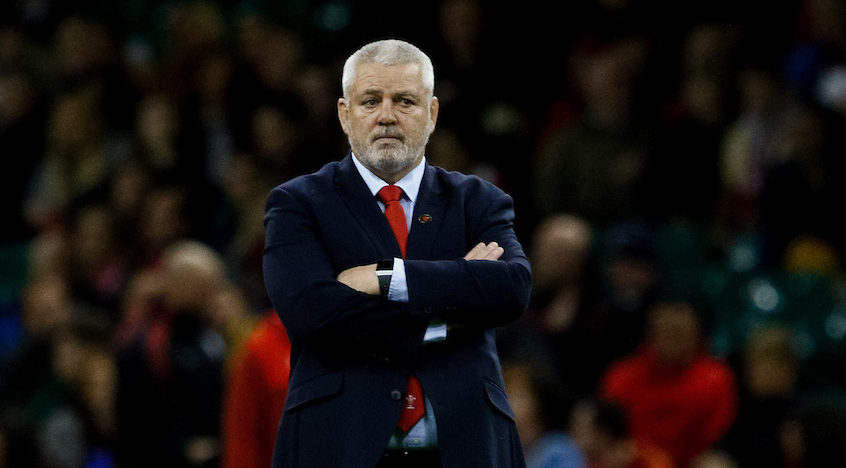 Warren Gatland praised his players’ mental toughness after Wales shrugged off a potentially catastrophic build-up to record an 18-11 victory over hosts Scotland that kept them on track for the Grand Slam.

Gatland had named his team two days early on Tuesday after the coach admitted their preparations had been disrupted by a midweek furore over merger plans involving the Ospreys and Scarlets.

“This is a fantastic group of men, they’re pretty tight and close but there’s no doubt Monday and Tuesday had an impact on the players,” Gatland said.

“In fairness to them after that early part of week they’ve got on with their jobs, I take my hats off to them about how they’ve dug deep,” he said.

Gatland said the players’ defensive drills on Tuesday had been subdued and poor, as both the 13 players in the Welsh matchday squad directly affected by the talks and the wider team struggled to cope with uncertainty over the regional sides’ futures.

The proposed merger, mooted as a way of heading off the difficult financial circumstances facing the regional sides, later in the week collapsed despite an earlier statement from Welsh Rugby Union’s Professional Rugby Board saying a deal had been struck.

Wales had to show similar fortitude on the pitch, weathering a sustained Scotland comeback in the second half that at one point looked like it might end the visitors’ dreams of a first Slam since 2012.

Wales now eye a Six Nations title decider at home against Ireland on March 16, hopefully bolstered by the reassuring presence of Liam Williams despite the influential fullback going off with his arm slung in his shirt in the second half on Saturday.

“It’s just a stinger and he’s come through, it’s nothing serious,” Gatland said.

Gatland also hit back at the idea of reducing the Six Nations to a five-week tournament with back-to-back games.

“I don’t think the Celtic nations could survive in a five-week tournament. England and France could cope but Scotland, Ireland, and Wales have not got the numbers, we wouldn’t cope with just the four [Welsh regional] teams,” he said.

The unbeaten tournament leaders will complete their first clean sweep since 2012 if they can beat Ireland in Cardiff next Saturday, but they had to ride their luck in Edinburgh as Scotland mounted a second-half fightback.

Tries from Josh Adams and centre Jonathan Davies helped Wales to a 15-6 half-time lead but the wheels threatened to come off after the break.

Darcy Graham’s score set up a blockbuster finish but Wales hung on for an 18-11 victory that leaves Gatland on the verge of becoming the first coach to win three Grand Slams.

But the Kiwi confessed his side were guilty of eyeing up their decisive showdown with Ireland during the second half against Scotland.

“We were pretty comfortable during the first half but in fairness Scotland came out and put us under a lot of pressure in the second,” said Gatland.

“We’ve lost the second half 5-3 but we’ve shown some real character. There were a couple of moments towards the end when Scotland were attacking but we drove them back.

“Any team that’s won a Grand Slam – and I think back even to last year with Ireland and that Johnny Sexton drop goal – you look back at certain games and know you’ve had a little bit of luck.

“Maybe from a coaching perspective we needed to be a bit tougher at half-time. We talked at the break about being pretty comfortable and going out to deliver a second-half (performance). As a result, maybe we were thinking about next week and that Irish game.”

Scotland have now lost three successive games and face the daunting prospect of a trip to Twickenham next week to finish off their campaign.

Injuries to Tommy Seymour, Blair Kinghorn and Graham rubbed salt into their wounds and coach Gregor Townsend admitted he is still unsure whether star full-back Stuart Hogg will be back in time from a shoulder injury.

But his main frustration was the performance of French referee Pascal Gauzere, with Townsend questioning why he did not issue the visitors with a yellow card despite seeing them concede five penalties within their own 22.

He said: “We would obviously have liked to have won that game. We had errors – probably caused by the defence’s pressure. But we had chances.

“There were five penalties in the 22, and to not get anything from that seems like their indiscipline was rewarded and our pressure wasn’t.

“Was I surprised there was no yellow card? Yes. If teams are giving away penalties close to their own try line through cynical play, then you expect that to lead to yellow cards. That is how international rugby is refereed throughout the world.”