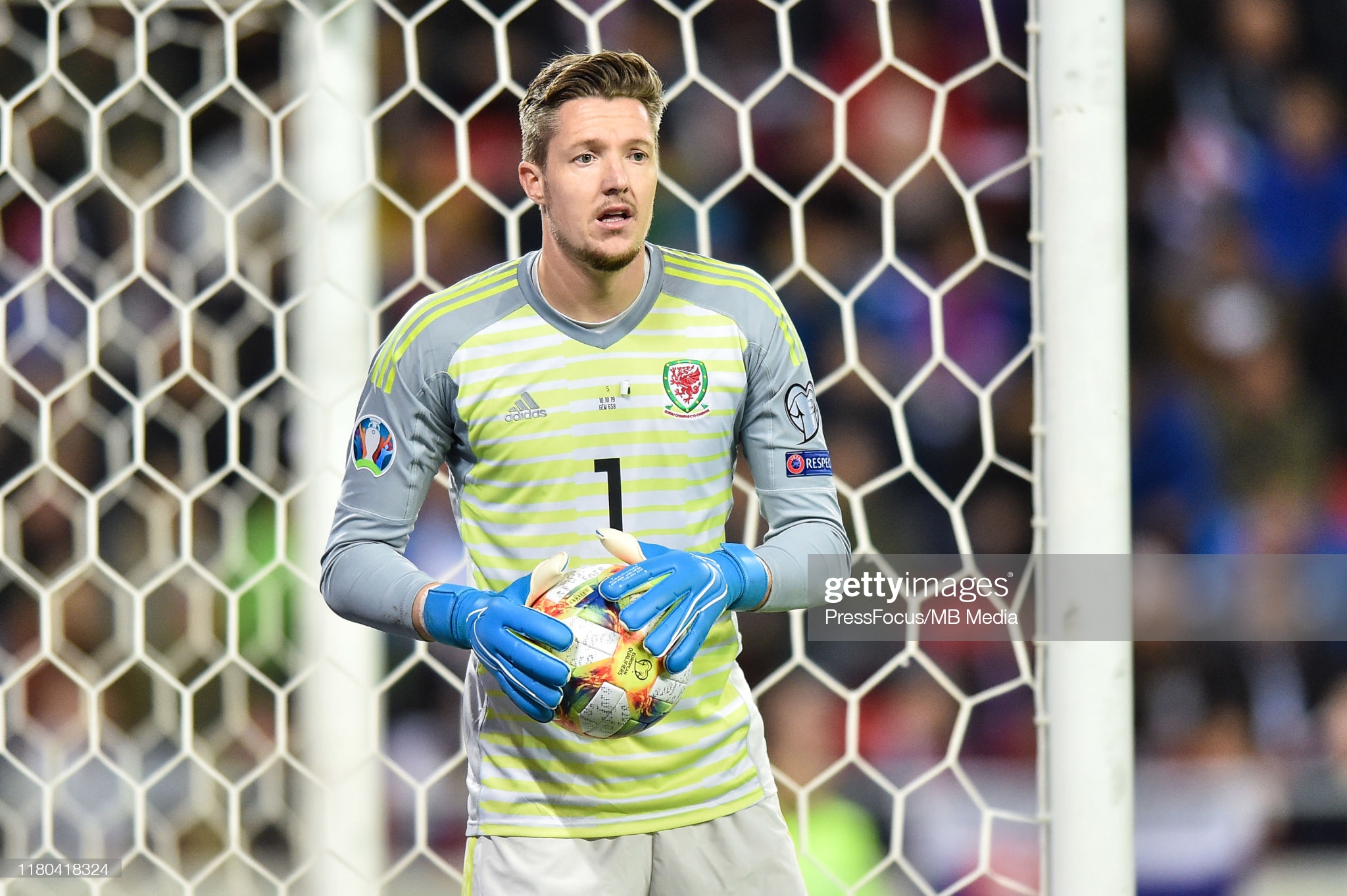 A year behind schedule and 3,000 miles from home, Wales’ Euro 2020 finals adventure begins when they face Switzerland in Baku on Saturday afternoon. It will be a landmark occasion in many ways, but if goalkeeper Wayne Hennessey gets selected then it would also prove another step towards a significant personal milestone, as he tells Rob Cole.

Wayne Hennessey is dreaming of another Euros adventure with Wales – one that could take him into the 100-cap club alongside founder member Chris Gunter.

Hennessey is currently trying to fend off the challenge of Danny Ward for the goalkeeping starting spot against Switzerland on Saturday, when Wales open their tournament campaign in Baku, in a match that is live on S4C.

If the Crystal Palace keeper – who was such a foundation rock for Wales at Euro 2016 – can retain the jersey ahead of Leicester City’s Ward then Hennessey will move on to 96 caps for his country.

That will put him just four short of three figures, a landmark that only Gunter has managed among male players for Wales.

With three group stage matches to play, another thrilling journey into the knockout stages could see Hennessey join Gunter as a centurion at the quarter-final stages.

Hennessey says: “I have already played 95 times for Wales. I would love to play in five more.

“If that comes in a game in this tournament that would be just amazing. To get five more caps and join Chris Gunter on a hundred would be special.

“I was absolutely over the moon when Chris got to 100 caps. He’s a fantastic player and a fantastic lad. For him to get to that number has been a brilliant accomplishment.

“For myself, I am taking it game by game. If I play one game, I’ll be over the moon. Everyone knows what playing for my country means to me.

“Qualifying again for a major tournament felt like a dream had come true. To now get the chance to represent my country at a massive tournament finals again is amazing.”

Gunter reached the 100-cap mark in a friendly against Mexico in March and has since moved on to 101.

Although he 31-year-old remains in Robert Page’s squad for this tournament, he is unlikely to make the starting line-up against the Swiss.

Gareth Bale – who is fourth in the Wales all-time list with 91 caps – is certain to be a starter and carry the captain’s armband, but Hennessey is arguably under more pressure for his starting place now than at any time since the 34-year-old made the position his own.

It comes after a frustrating season at club level in the Premier League, where Hennessey made just one appearance for Palace as manger Roy Hodgson preferred Spaniard Vincente Guaita.

There have been benefits, though, says Hennessey, who insists he has arrived at this tournament feeling fresh, fit and injury free.

“It is difficult when you are on the bench and not involved,” he says. “But it has been one of my best seasons, fitness-wise.

📸 Fingertip save from Wayne Hennessey

“I have been training a lot and I feel really fit and sharp. It has not been ideal or what I wanted to play so few games, other than when I have played for Wales.

“But the goalkeeper there, Vincente, has been playing really well. He won player of the season, which shows how he has kept me out.”

With his contract up at Palace, Hennessey may already have played his last match for the Eagles and he knows this tournament could well prove a useful shop window.

“My contract is up and I have had a fantastic time at Crystal Palace. I have loved the club, the fans, Roy Hodgson has been fantastic. But who knows what comes next?

“But once I put that Wales shirt on, I am representing my country and that’s all I’m thinking about.”

Five years ago, an injury meant Hennessey missed Wales’ opening victory over Slovakia in Bordeaux. But he returned to play in the matches against England, Russia, Northern Ireland and Belgium – providing reassuring calm and a safe pair of hands – until the eventual semi-final defeat to Portugal.

This time, few people have tipped Wales to extend their stay as long but Hennessey insists Robert Page’s squad has the capacity to spring more surprises, starting with Saturday afternoon against the Swiss.

“I can’t see why we can’t cause more surprises. The squad we have is a very strong one. There is a good mix of older and younger players.

“We have some fantastic attacking players, so we are well equipped to cause problems for other teams.

“Robert Page has come in and done fantastically well. This opportunity is well deserved for him and we have now had a good amount of time together.

“If we can repeat what we did back in 2016, that would be incredible. But why not aim for that achievement again?

“We have fantastic managerial staff, back-up staff and players so there’s no reason why we can’t.

“But we need to take it step by step. It’s one target, then the next.”

Join Dylan Ebenezer and the S4C team for live coverage of Wales’ opening match in the UEFA EURO 2020 Championship, against Switzerland, in Baku, Azerbaijan.