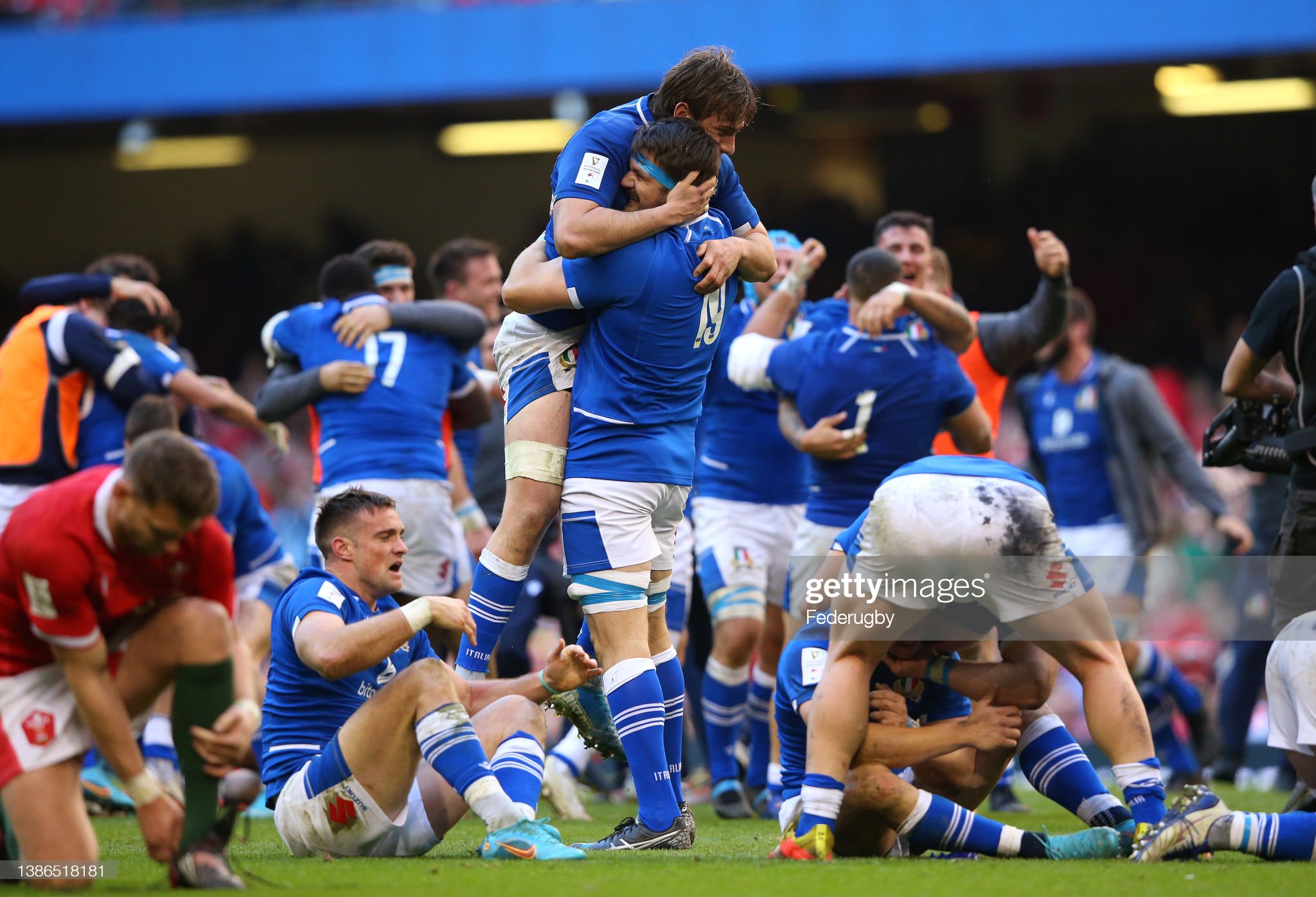 Wayne Pivac insists he will get it right again with Wales and is still the man to take them to next year’s World Cup.

His defiance came after the head coach suffered his worst day in the job – a shock 22-21 defeat to Italy in Cardiff.

It meant Wales finished fifth in the final Six Nations table a year after winning the title as Italy won for the first time in the tournament for seven years.

“Nothing changes in terms of where we’re at and where we’re working towards,” said Pivac.

“Obviously, that was not part of the plan, to lose this match. Certainly, it’s disappointing.

“What we do as a coaching group is review this game and probably spend more time looking at it than we’d liked to have.

“We have to look at why we didn’t have the energy or the urgency that the Italians came with. On such a great day, with the sun shining and milestones to motivate us, we have to go away and work out why we didn’t get the performance we were after.”

Josh Adams gives his POTM medal to Ange Capuozzo after his sensational display helped Italy to their first ever win in Wales 🙌#GuinnessSixNations #WALvITA pic.twitter.com/CTj9q8JJvg

Wales faced the embarrassment of becoming the first side to lose a Six Nations clash to the Azzurri since 2015.

To put this defeat into context, this was Italy’s first victory in the championship in 37 games, while they hadn’t previously won in Cardiff.

Last season’s champions were poor throughout but looked to have got away with it when Josh Adams sliced through the Italian defence to fire Wales into the lead.

But with two minutes remaining Italy full back Ange Capuozzo raced clear to put Edoardo Padovani over for a last gasp try.

It was enough to ruin the post-match celebrations Wales had planned for Dan Biggar – who reached the milestone of 100 caps for his country – and Alun Wyn Jones, who was setting a staggering mark of 150 games in a red shirt.

Pivac’s next job is to prepare a squad to go on tour to South Africa this summer, on the back of just one victory – over Scotland – in the tournament.

He will then work towards 2023, a year which culminates with the World Cup in France.

The game winning try for Italy 🏉

There are bound to be calls from some quarters for the New Zealander to stand down but he remains convinced he can turn things around – just as he did last year after a fourth-placed finish in his first season in charge.

“We’re not going to lose focus on what the big goal is here and the big picture is. Yes, today is a bitter pill to swallow for everybody.

“We have to learn from the performance and get better. I’m hoping we take a step forward in the summer against the world champions in their back yard, which is going to be a challenge.

“We go there with an idea of how far we are from the world champions 12 months out from a World Cup.

“So it’s not a bad place to be when you look at it from that point of view.

“We’re gutted with the result. No one is happy with a performance like that, especially when you give away 12 points through discipline in the first-half, score three tries in the second-half, get across the line, have moments where we could have pinned them back but let them slip. That’s pretty frustrating for everyone.”

We talk about an English arrogance often too, but Wales looked like they believed today was a formality.

At times they looked like they were going through the motions.

Italy deserved that and probably more than Wales didn’t #WALvITA

Captain Biggar admitted certain players are unlikely to survive this defeat, although Pivac himself was more cautious about writing of the international careers of those who have failed to convince this season.

Biggar confessed: “We’ve said in the huddle now, that’s probably the last chance for a lot of players.

“It’s so poor to lose it from where we were. We’ve played poorly all day but to not finish it off from 70 metres from our line.

“Too many boys were not quite up to speed. We were second to loose balls and balls in the air.

“It’s really disappointing that something that we pride ourselves on that requires no talent is work ethic.”

The result would have been different if replacement prop Wyn Jones did not have a try chalked off by the television match official with five minutes remaining.

I don’t see Pivac getting sacked or leaving before the World Cup. But there’s no denying Welsh rugby is in trouble. From pro game down to grassroots. Wales’ success has papered over the cracks for years.

Maybe now the governance will be properly scruntised. Or maybe not…

After Adams put Wales into the lead with a well-taken try, the hosts looked like they had finished the job when Jones powered over from short range.

But referee Andrew Brace couldn’t see any clear grounding which came back to haunt Pivac’s side.

Biggar believes the try should have been given. “I think we were a little bit unlucky on the try,” he said.

“Wyn thinks he scored it when it’s gone to the TMO. If that gets given then the game’s different but it wasn’t.”

Test matches at the highest level turn on such incidents, and Wales head coach Pivac was left scathing by that decision.

“I think it’s in the wording; on field no try,” said Pivac. “I thought it looked as if he got across the line.

“He’s a big man so if it didn’t touch a blade of grass, I’d be very surprised. When you ask an inexperienced TMO to have a look at it but the on field is no try then it’s always going to be no try.