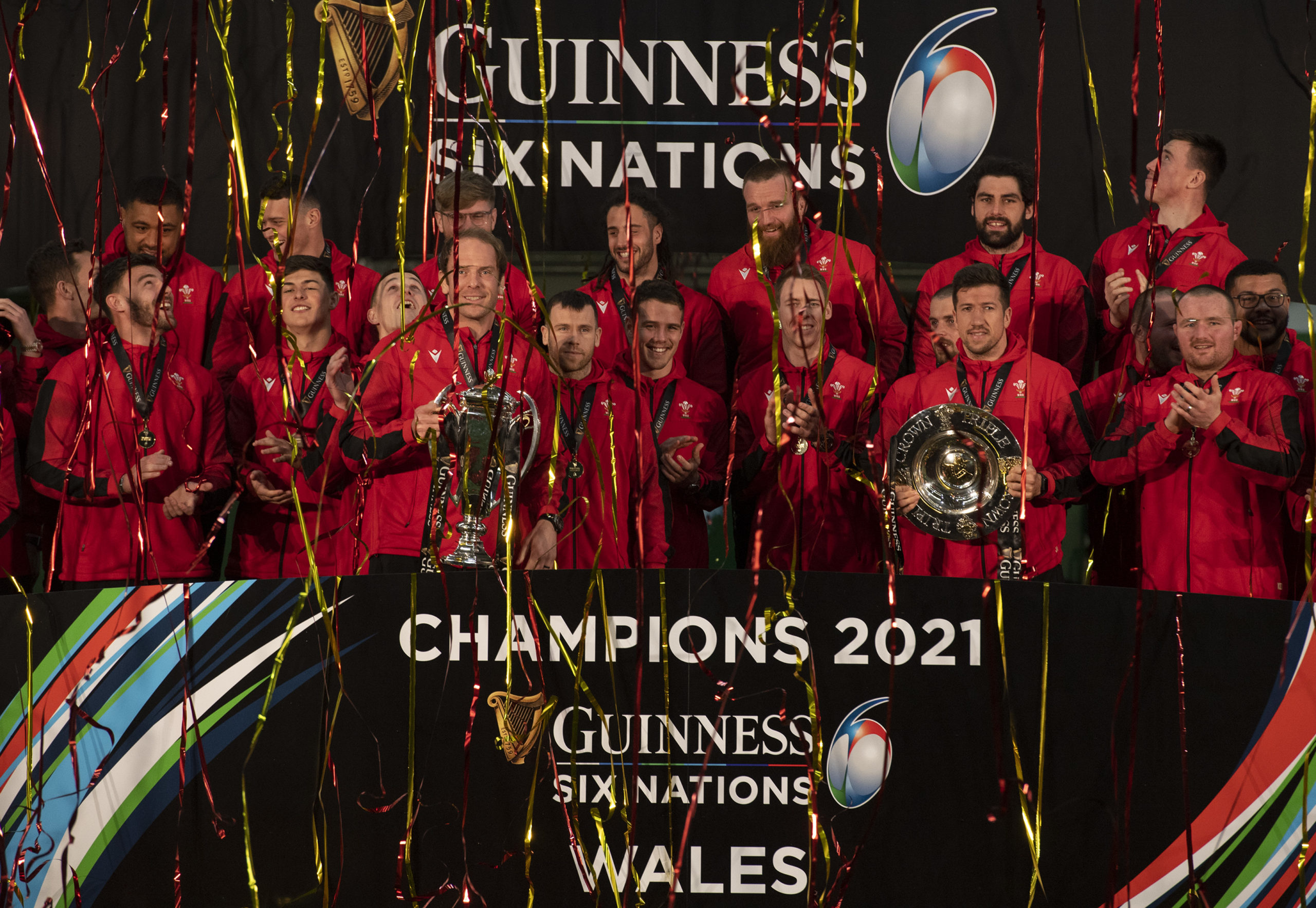 It’s curtains for anyone who accused new Six Nations champion coach Wayne Pivac of lacking style in his domestic arrangements.

Wales lifted the trophy on Saturday afternnoon – but not before Pivac managed to pull himself together and defend the choice of curtains in his house.

Pivac’s backdrop during a live Friday night television interview after Wales were confirmed as champions attracted plenty of interest.

The floral-patterned curtains, complete with tassles, could possibly not be described as cutting-edge decor.

And the Wales boss had clearly received plenty of ribbing from players and management before he attempted to draw matters to a close.

“I just want to clarify the questioning of the decor of the house that I live in,” a smiling Pivac told reporters ahead of the trophy presentation at Wales’ training base.

“The curtains weren’t selected by me or my wife Mikaela – we rent the property – so I just wanted to get that out there and clear it up!

“They are not curtains of choice, but they are very thick and they keep the cold out and the warm in, so they do their job.

“Hopefully, I will be able to get some sort of sponsorship deal from a curtain place! There has been a lot of feedback on the curtains from all over the globe. It has taken off. I seriously hope I am going to get a windfall from that.”

Scotland’s victory over France on Friday, meanwhile, meant it was not curtains for Wales’ Six Nations campaign as they landed a sixth title.

It was an emotional rollercoaster the last seven days,” Pivac said.

“We put in by far our best performance against the French, and I thought we had done enough midway through the second-half to have won that game, but it wasn’t to be.

“To lose it in the last play of the game was devastating. The boys really wanted that Grand Slam, so we had the lows of not achieving that.

“Then we didn’t know if it was good enough to win the championship. Waiting (almost) seven days for that match and then having to go through that match with so many moments that kept us on our toes.

“The last week, it probably took me until Wednesday or Thursday to really want to come out of the house, purely from the point of view that it was a sickening feeling for the players who had worked so hard.

“We desperately wanted that Grand Slam for so many reasons for the hard the work that went in, the style of rugby we played, and to win that way would have been fantastic, but we really wanted to do it for the people of Wales.

“They have had to put up with a lot in the last 12 months and we’ve all had to live through this thing (coronavirus pandemic). It was really hard to take, I have got to say, but the sun does come up in the morning, as people say.”

Wales are now just one behind England in terms of overall Six Nations title triumphs and their latest success came after a poor 2020 when they won just three Test matches – beating Italy, twice, and Georgia.

It was Pivac’s first year at the helm since succeeding Warren Gatland, and Six Nations silverware underlines how impressively things have been turned around.

“It’s not about me, it’s about the team. We are very much a team,” Pivac added.

“The (Welsh Rugby Union) board have been very supportive. We laid out a plan to the (2023) Rugby World Cup at the start of this tenure, and we’ve stuck to that, and I have been regularly updating my board.

❝We’re going to be very proud when we look back❞

“I know the rugby public hurt when we don’t win a Test match, just like how we hurt. That is expected, it goes with the territory. But moments like this make up for the bad times.

“We are not the finished product. We will keep on improving and fine-tuning. We are measuring up quite nicely but we can’t get ahead of ourselves.

“Everybody knows their rugby history in Wales. Young rugby players grow up dreaming about pulling the jersey on, and when they do, it means so much to them.

“We understand that we are just custodians for the jersey for a period of time, so we want to do the best by it and make a nation proud.

“It’s a privileged position to be in, where you represent a country where your sport is the number one sport.

“It is not lost on this group of players. I was privileged to be in and around them in this competition. Hopefully, we can have many more tournaments like it.”