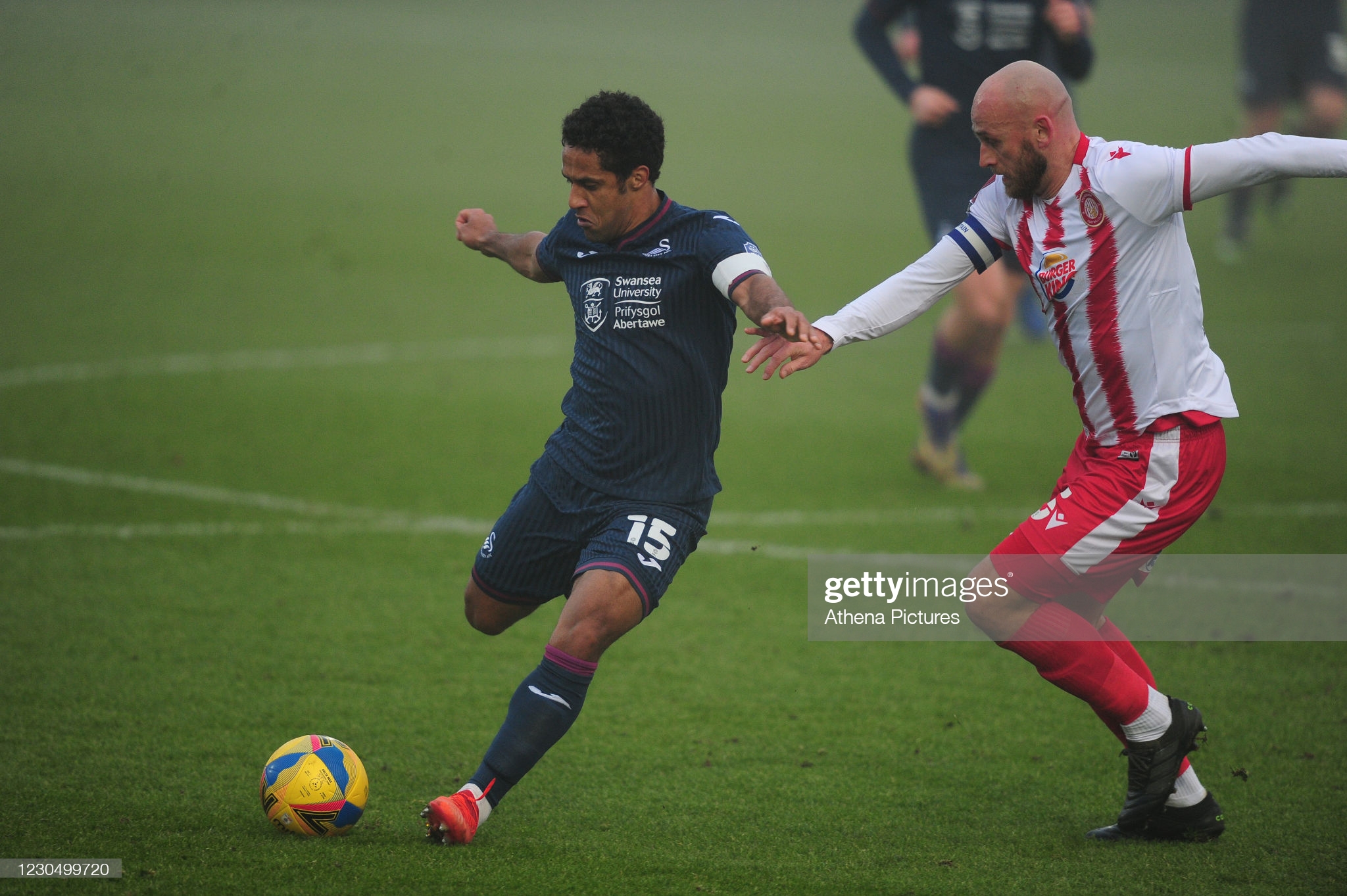 Steve Cooper insists Wayne Routledge can carry on playing for Swansea City just as long as he likes.

The Swans head coach paid tribute to Routledge as the evergreen winger helped see off Stevenage 2-0 in the FA Cup third round.

Routledge featured in Premier League Newcastle’s humiliating 3-1 defeat in Hertfordshire 10 years and one day ago.

But the 36-year-old’s early strike helped the Swans quash any thought of another cup upset and Cooper hailed Routledge’s contribution as his side push for promotion.

“The objective was to win the game, all our preparation was normal,” Cooper said.

“We changed the team, we appreciated it would not be a free-flowing performance. To win 2-0 away from home is a positive.

“It wasn’t as free flowing as we would have liked but we predicted the game would go like that.

“Wayne could have played anywhere. We are so fond of him, he’s such a good guy and player. He has a big heart, he’s a big role model. He’s there when I need him.

“I can always count on him and there is a bit to go with Wayne, that’s for sure.

“I don’t want to lose Wayne now, he’s part of the fabric and I can’t imagine not coming into training and seeing him. He’s been a proper player for the club.

“I cannot pay enough respect or give him enough credit. He is a remarkable guy, and he has had a great career.

“He is so well liked and valued at the club. He would probably like a few more minutes than I am giving him, but he is brilliant to have around and he can still play.

“Every day in training he will do something that impresses us, and if we need to start him in games he will be ready to do that, as he showed today.

“He’s a real bridge between myself and the dressing room, I think the professional in him will always want to play, but he knows the contribution he is making.”

Swansea lost 5-1 at QPR at this stage last season but there was to be no repeat this time around.

Routledge headed in from Yan Dhanda’s seventh-minute cross, his first goal of the season in his eighth appearance.

Stevenage started the second half well but were caught out on 50 minutes with Gyokeres’ glancing header finding the net.

In foggy conditions, the hosts should have pulled one back nine minutes from the end as Gyokeres handled in the area but Luke Norris’s spot-kick was brilliantly saved by Freddie Woodman.

Cooper will now spend the next few days trying to bring in reinforcements to his squad after the return of Morgan Gibb-White and Kasey Palmer to their parent clubs and a long-term ankle injury to goalkeeper Steven Benda severely weakened the coach’s options.

“We are getting closer but until something gets over the line we won’t get too excited,” Cooper said.

“We work really hard. We know what we want to do. If the things we are trying to do come off, I think it will be good.

“It is important to add players, but it’s got to be the right players and the right characters.”

Benda had been due to play in place of Woodman at Stevenage until the 22-year-old German got injured.

“Steven is going to need an operation on his ankle so it’s going to rule him out for a few months unfortunately,” Cooper said.

“Lewis Webb who was on bench today is a fine young goalkeeper, but we are going to need to add another in now and we are working hard on that.”

Stevenage boss Alex Revell saw enough from his side to convince him they can succeed in their League Two survival battle.

Swansea City are in the hat for the #FACup fourth round! 🎩

This is how they beat Stevenage 👇#bbcfacup

“I felt that apart from the two goals, which were disappointing, we played some really good stuff, we were positive and we looked like we could be a threat,” said Revell.

“The final pass let us down. We got the penalty at a great time and if we had scored it things might have been different.

“We need to realise it was a good performance. We are together as a club and a team. We needed to improve and my job is to make sure this club never has a season like last one.

“We are working hard to ensure that does not happen again. We need to build and improve but I feel we are together. We will get away from our position and build the club to where it should be.”