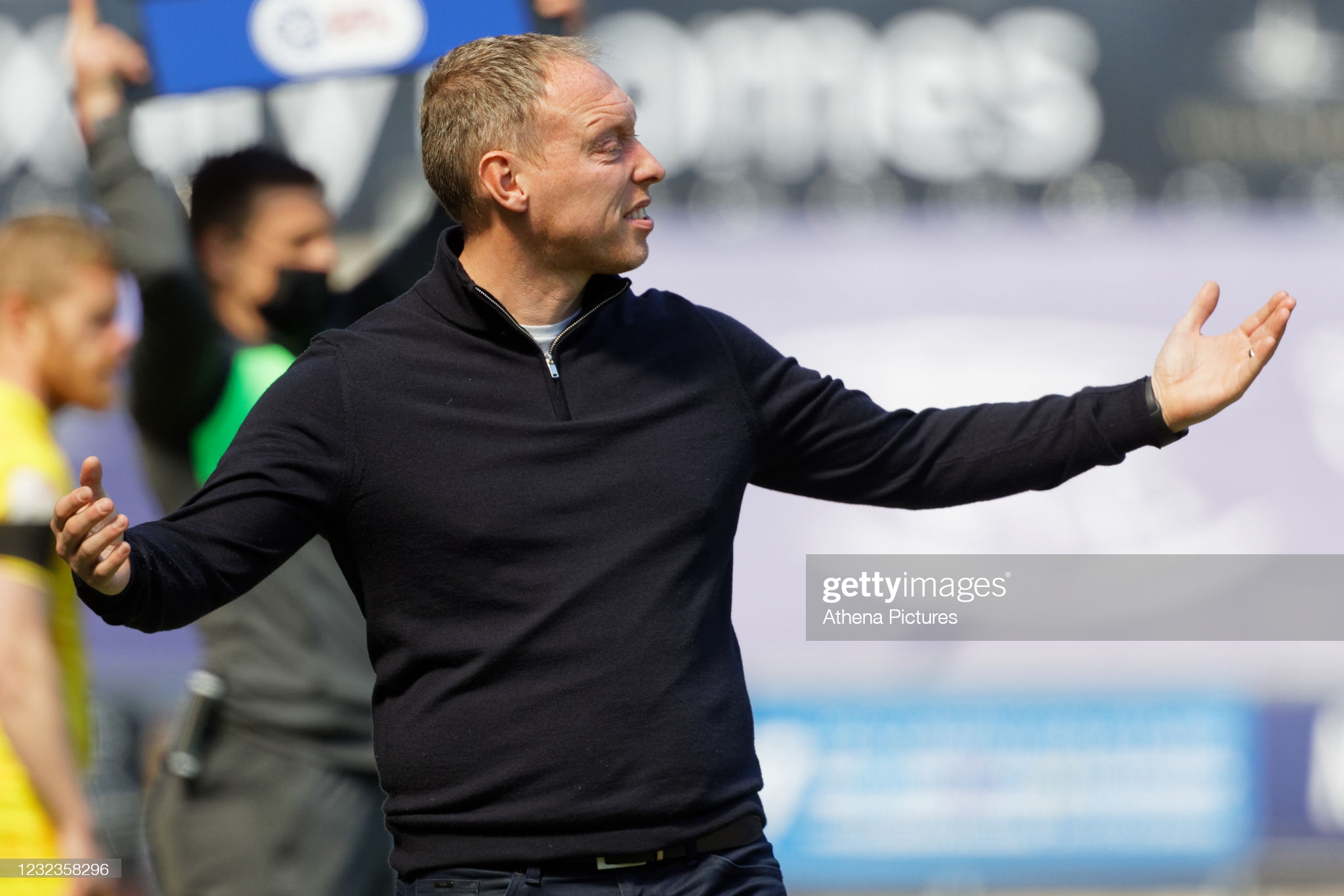 The gap between Swansea and second placed Watford is now down to six points after the latter surprisingly lost at Luton.

Both contenders have four games to play and are due to meet at Vicarage Road on the final day of the season.

Brentford sit two points behind Swansea following their goalless draw with Millwall, but with a game in hand.

Swansea themselves were heading for what looked a certain defeat after trailing to early second half goals from Admiral Muskwe and Gareth McCleary – before Jamal Lowe’s 80th minute penalty was followed three minutes later by a headed equaliser from the returning Liam Cullen.

The final whistle brought mixed emotions for Cooper’s side. On paper, they failed to fully capitalise on Watford’s defeat at Luton but in reality, it was an unlikely point gained from an afternoon where the visitors were by far the better side.

After Andre Ayew limped off early on, Gareth Ainsworth’s team dominated physically and carried the greater threat, and when Muskwe blasted home from 20 yards in the opening seconds of the second half, it was fully deserved.

Five minutes after that McCleary cut in from the left flank and fired in through a crowded area.

Even after Swansea’s late show, there was further drama in injury time when former Liberty Stadium favourite Adebayo Akinfenwa headed against the post for Wycombe, and Muskwe somehow put the rebound wide from point blank range.

At the other end, Ryan Manning had huge claims for a second Swansea penalty turned down when he took a tumble in the six-yard box.

“In a way, both,” said Cooper, when asked afterwards if he was pleased with a point or lamenting two dropped.

“It was a missed opportunity because the objective today was to win. We’re playing a team fighting for something else and they needed to win as well and we felt there would be enough space and gaps to hurt them.

“But the first half wasn’t good enough and the start of the second was really poor – I was disappointed to say the least. Whatever minute of whatever game you have to do the non-negotiables well and we didn’t.”

Cooper could at least praise a fightback which ensured the hosts salvaged something.

“We were 2-0 down and the players have shown a lot of heart and courage, and good play, to get back in the game and we shouldn’t lose sight of the obstacles we got over.

“So in the end it’s real mixed emotions. The result could have been worse but in saying that we created more than enough chances.

“Connor (Roberts) got in a couple of times in the first half and between their goals Jamal’s had a chance that’s hit the keeper’s legs. Anywhere else and it was a goal.”

300 appearances in a Swans shirt for Wayne Routledge.

Watford still have to play Norwich, Millwall and Brentford before that showdown with the Swans on May 8th, and Cooper said his players will be giving everything to catch them.

“I’ve always said that whatever there is to play for, we’re going to go for it.

“We will always think we can catch Watford. We’ve done a lot of work on mentality since I’ve been here and what it takes to win. Time is precious at the moment so we need to make the most of our games and go for the wins.

“But what a place to be in with four games to go. I’m disappointed we didn’t win today but I can take a deep breath, look at the bigger picture, and it’s exciting.

Swansea next host QPR on Tuesday and Cooper admitted Ayew was all but ruled out, but said it would take 48 hours to know the extent of what appeared a hamstring injury.

Norwich City are promoted to the Premier League thanks to Brentford & Swansea dropping points! pic.twitter.com/dF3O7eE6J4

As for his opposite number Gareth Ainsworth, he spoke of his pride for the way his team, bottom of the table, continue to improve and show fight.

“The frustration (of not winning) is always quickly gone with the pride of a team like Wycombe.

“I thought we were fantastic, we scored the better goals, and I’m amazingly proud of my boys. We have a lot of free transfers and I’ve barely paid for a player in our squad so to come here and do what we did to a team like Swansea is fantastic.

“Steve Cooper is one of the most respected managers in this league for me. Like his dad he’s humble and down to earth, I’m just sorry we didn’t beat him today.”