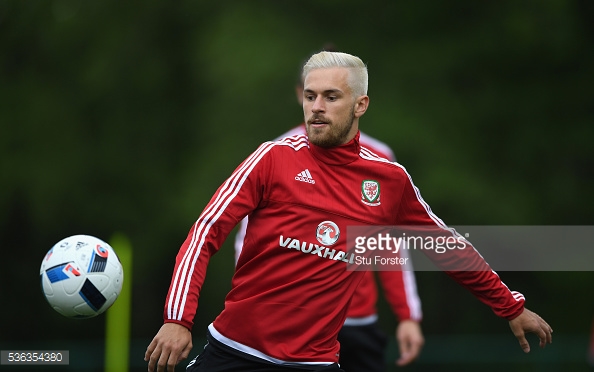 The Welshman was and still is a God to Juve fans. When Charles returned to Turin years after his hugely successful playing spell in Italy supporters fell to the ground in front of him and tried to kiss his feet.

What then will the passionate and committed Juve fanbase make of Aaron Ramsey if, as expected, he does opt for Juve? His nickname won’t change – Rambo it is and Rambo it will stay.

Jimmy Greaves, Denis Law and Ian Rush were other top quality footballers who experienced football in Italy. Ramsey is a completely different style of player to any of them – and he has the skill and expertise to be a massive hit for Juve.

I first chatted to Rambo when we both lived in Caerphilly. Teenager Aaron was born-and-bred in the town, while I am an Englishman who moved to Wales during the early 1990s.

He has always been approachable and we would chat when our paths crossed at Caerphilly Leisure Centre – or the petrol station at Asda. Rambo could not be missed – he drove a lime green Fiesta with a black and white check roof at the time.

The first time he saw the Arsenal players’ car park it was clear the Fiesta was surplus to requirements, saying: “That was the first thing that had to go. Secretly, though, I hoped nobody knew about it.”

Aaron loves his home town – and Wales – with a passion and will miss both if, or when, he moves to Italy.

“I am passionate about being Welsh,” he says. “It’s the culture, the way people are in the community. It is very tight and has always been like that.

“It is just different – London seems so busy and people don’t have time to talk. They rush off to do their own thing.”

It seems astonishing to me that Arsenal are willing to allow the talented playmaker a free transfer to Juve, but that seems to be the case and the likelihood is that his next club, with no transfer fee to pay, will make him the best-paid British player of all time.

Reports say Rambo has agreed a five-year deal with Juventus worth £36m and will join the Italian champions at the end of this season.

He will not be signing a new deal with Arsenal after the Gunners withdrew a new four-year offer in September for football and financial reasons.

Had fate not intervened Aaron might well have been playing the Wales rugby team instead of the national football team.

He was a schoolboy winger with Caerphilly Rugby Club at the age of 16 before he turned to football.

“I was a rugby winger at the age of eight was pretty quick,” Aaron told me during a sit-down interview in Portugal.

“Rugby was my first sport then. I played touch rugby and one year of tackling, at fly-half or on the wing.

“I was lucky that I got that opportunity to play for Cardiff at such a young age.”

The Bluebirds were on a pre-season tour to Lagoas Park in Estoril and teenager Aaron said: “I wanted to try all different sports at that age and football was one of them.”

Ramsey attended Welsh-speaking schools since nursery and took the chance to play at a tournament organised by Welsh language youth movement Urdd.

“Gary Lewis is one of the Urdd coaches and he also worked for Cardiff City,” he explained.

“He took me to the club at the age of eight.”

Rambo spent much of his time in Portugal with other teenagers in the squad, Chris Gunter and Matt Green.

Yet he also showed great maturity in the way he integrated, settling into a 25-strong party both in terms of football and around the team hotel.

At the time, Aaron was still living at home in Caerphilly with mum Marlene, dad Kevin and brother Josh, who was then 14.

He had just left Ysgol Cwm Rhymni to join Cardiff as a first year scholar and said: “I used to go and watch Cardiff City with my dad.

“He has been the biggest influence on me, taking me to football and kicking around with me at every opportunity.

“Graham Kavanagh was a favourite player of mine, although at that age everybody at school would follow a Premiership club as well.

“I chose Manchester United and Roy Keane was my favourite.”

Ramsey, a Welsh-speaker, made his league debut against Hull in 2007 when he became the youngest player to play for the Bluebirds, aged 16 years and 124 days.

It was former Cardiff City coach Terry Burton who alerted manager Dave Jones that Rambo was ready for a first team call-up. He had been due to go on a pre-season tour to Scotland with the youth team, but impressed during a friendly at Merthyr Tydfil.

“He had just left school and was only two weeks into his career when we drafted him into the team for a friendly at Merthyr,” said Burton. “He was excellent and had a maturity and vision above his years.”

Burton got straight on the phone to Jones, and told him Ramsey had to be included in the first-team squad for their pre-season trip to Portugal.

“I spoke to Arsène just before Arsenal signed him,” added Burton. “I was sitting with him in his office at the training ground and said ‘I’d really like to find something negative to say, but I can’t.’

“The worst he could come up with was that Aaron was exceptionally quiet – ­surprisingly so for a lad nicknamed Rambo who wrote on his social networking ­webpage that he was scared of ‘nuffin’.

“He comes to life on the pitch. That’s the best way, really.”

Burton was important in swinging Ramsey’s decision away from signing for Manchester United and towards north London and says: “Manchester United were in, just after we had played Portsmouth in the Cup final.

“I explained to Aaron that if he had the chance then Arsenal would be a good choice because of the way they play and the way he plays.”

The Bluebirds were keen for Aaron to join Manchester United, who had agreed to loan the midfield player back to the Welsh club

“In an ideal world I would have wished him to go to Old Trafford,” said chairman Peter Ridsdale.

“Arsenal offered £5m cash and was the best bid on the table, but United were close because they offered a loan back option.”

What impressed Ramsey about Arsenal above other clubs was not just the plane that flew him, parents Kevin and Marlene plus his agent to Switzerland – it was also Wenger’s detailed knowledge of how he could improve him as a player.

“I felt more wanted at Arsenal,” said Ramsey. “By that I mean they did more things to try to get me. They had a plan set out for me and knew exactly what they wanted to develop me.”

The Ramseys are a sporting family. Father Kevin was a good footballer, mother Marlene played hockey for Wales and younger brother Josh represented his country in under-18 rugby.

Now Rambo is preparing for the next stage of his football career. And it looks certain Aaron will follow in the footsteps of ‘Il Buon Gigante’ John Charles.

Personally, I would love to see the boy from Caerphilly succeed beyond his wildest dreams.